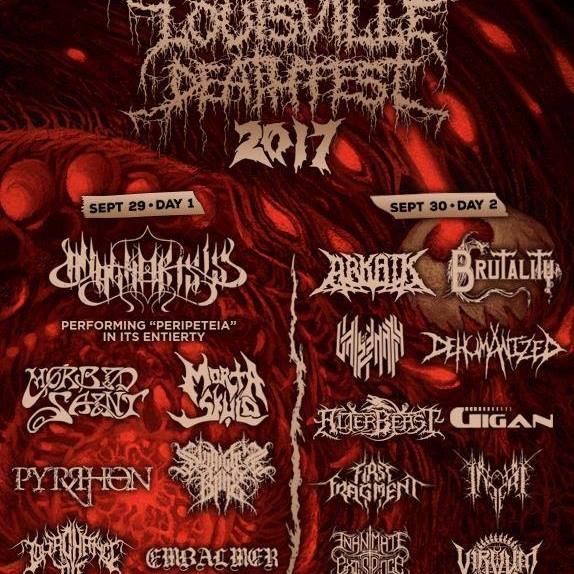 (Austin Weber prepared this post highlighting the upcoming 2017 edition of Louisville Deathfest, which boasts an especially killer line-up this year.)

Here in my hometown of Louisville, Kentucky we have a yearly metal fest event called Louisville Deathfest. The event serves to highlight a mix of local acts and acclaimed national groups many of us know and love. I’m writing a short post about it here because this year’s line up is fucking ridiculous and it only seemed right to try to shine a spotlight on it for anyone who may not have heard about it but might be intrigued enough to make the trek for it.

A two-day pass for the event is currently a mere $30, with single one-day passes just $20, though I would assume day-of-show prices might be higher as is normal.

Without further adieu, here is the incredible line-up I was speaking of, and I’ll have some short observations to make after listing them.

As you can tell, if you’re a fan of modern dissonance-focused metal or technical death metal, this is basically an MDF for us. The ones I’m most hyped for on Day One are all bands I’ve seen live before, but all three are so stupendous live that I can’t wait to see them again. Those three are: Amiensus, Pyrrhon, and Imperial Triumphant.

Coincidentally or not, both Amiensus and Pyrrhon have each put out killer 2017 releases, so I know they’ll play off those records live. Imperial Triumphant are working on a new full-length, and I’ve been told will be playing some new unreleased material for their set.

I’ve heard good things about Sunlight’s Bane and Oubliette so I’m interested to see their sets on Day One also. Lastly, Simone Pluijmers’ (ex-Cerebral Bore) new band Your Chance to Die will also play on Day One, and their 2017 release of technical melodeath should be interesting to see live as well.

Then there’s a fuckton of bands who are some of my favorite tech-death groups but I haven’t seen them live before. Those including Arkaik, Inanimate Existence, Inferi (in a rare live appearance), Enfold Darkness, Vale of Pnath, Virvum, and First Fragment. Once again, coincidentally or not, many of these groups on Day Two have put out incredible new albums this year, and I’m hyped to see them play music from those live — from the new Gigan album, to the new Artificial Brain album, the new Arkaik album, the new Enfold Darkness album, and the killer new Inanimate Existence album as well.

In summation, you’d be hard-pressed to get such a sick line-up for so cheap. So come if you can. Especially if you’re in a neighbouring state such as Indiana, Ohio, Illinois, Tennessee, etc., where it might only be a few hours’ drive. With ticket prices so inexpensive, spending a bit on gas and accommodations seems more affordable. This should be an event you’ll be glad you went to.

UPDATE:  Due to visa issues, First Fragment has been forced to withdraw from the festival this year.

7 Responses to “LOUISVILLE DEATHFEST: A PREVIEW”