Four years after the last album, Arckanum has returned with a new one named Den Förstfödde (“The Firstborn” in English), but alas, Arckanum has made clear that this will be the final one in a career that dates back to 1993. 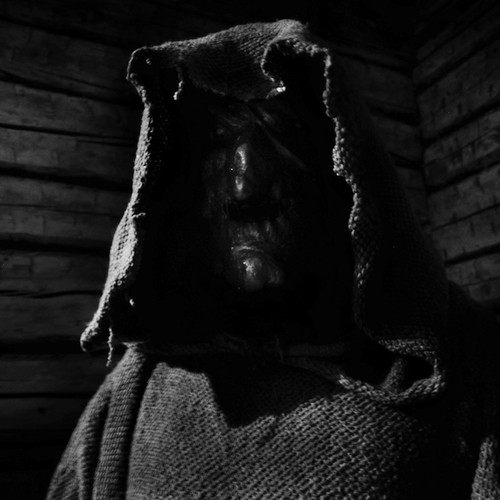 The album was released by Folter Records on September 29, and the label states that it “is devoted to Jörmungandr, the first son of Loki and Angrboða, whose giant power covers the earth” and that it is “designed to enkindle the black flames of Thursian Powers within the followers of Ragnarok”. The lyrics are entirely in Swedish.

I’ve listened to the entire album only once, and have marveled at it. If this is to be the final Arckanum work of the band’s lone creator,  Johan “Shamaatae” Lahger, it’s fitting that he has accomplished something so gripping from start to finish.

While I’ve made only one complete pass through the album, I’ve listened to several songs more than once, because I found them especially compelling. I’ve picked one of those to highlight — it’s the sixth track, “Låt Fjalarr Gala“.

Unlike some of the other tracks, this one allows the listener almost no room to breathe. The flickering riff, rumbling bass line, and hammering drum propulsion jump to an electrifying surge right from the beginning. The depth and ferocity of Shamaatae’s voice adds to the intensity.

As he does in other songs, Shamaatae uses a bass solo to signal that something new is about to arrive in the song, and what arrives is a spectacular guitar solo performed by guest musician Set Teitan (ex-Aborym, ex-Dissection), who also adds his voice to choruses near the end. Set also appears as a soloist on “Likt Utgårds Himmel” and “Ofjättrad”, both of which are also songs I’ve been pulled back to more than once. 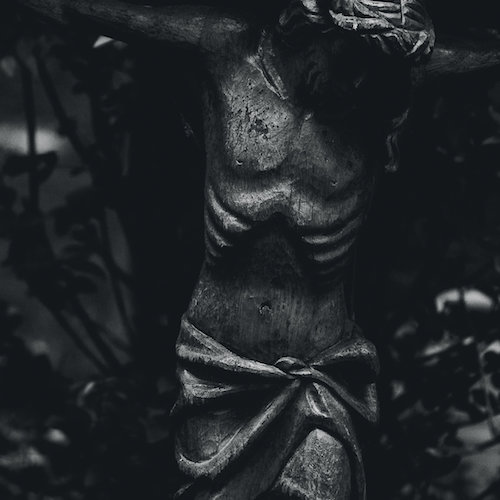 I’ve been following the Danish band Hexis since 2012, posting reviews of their early split with As We Draw and Euglena, their 2014 album Abalam, a remarkable video for the song “Septem“, which appeared on the band’s last album, Tando Ashanti, and that album itself, which we also premiered. Just two days ago a new Hexis EP named XII was released by Crown and Throne Ltd. (New York) and Truthseeker Music (London), and that stream is the next item in this collection.

I wrote of Tando Ashanti: “It is unrelentingly oppressive and emotionally devastating — seething and desolate, barren of hope, redolent of turmoil and pain at every turn. All light has been banished from its confines, with no possibility of re-entrance…. It hits very hard, brutally tears you down, makes every black thought even blacker.”

XII is a devastating assault of as well, one in which Hexis continue to meld black metal and hardcore through murky gales of swarming, poisonous riffage, tormented leads, and riveting drum and bass work, which are principally responsible for the dynamism of the music. As before, the vocals are raw and ravaging. As before, the overall impact is harrowing, and brutally destructive.

Hexis are currently in the midst of a U.S. tour. I’ve included the remaining dates after the links. I was unable to see them when they visited Seattle; I hope you’re able to. 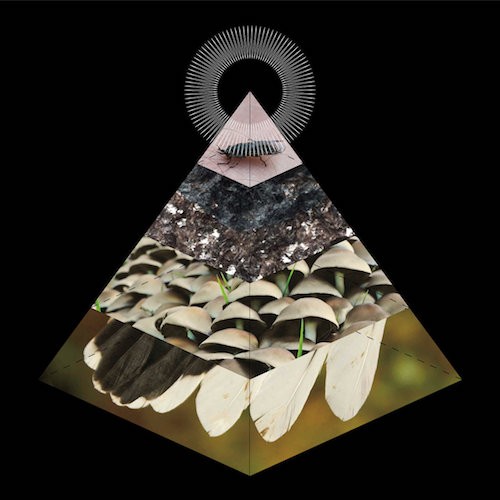 Belus is a Brooklyn-based trio consisting of guitarist/vocalist Matt Mewton (also in Woe),  bassist/vocalist Lesley Wolf (also in Mortals), and drummer Jacques Johnson. The last time I wrote about them was in a review of their 2014 split with Anicon. There has been a demo since then, and now Vendetta Records has set October 13 as the date for release of the band’s debut album, Apophenia.

You can listen to one song from the album now, a track called “avarice“, which recently premiered at DECIBEL. Included in that article were these words by Jacques Johnson:

“The loose concept behind the album is more or less tied to the title Apophenia—a term that describes the human tendency to seek patterns in random information and assign unnecessary meaningfulness or importance to them. In the late 1950’s, it was a term coined to help describe the beginning stages of schizophrenia. It’s also a term applied to various schools of magical thinking and the occult.”

“avarice” is part juggernaut and part fever dream. The rhythm section batters and grinds remorselessly, while the guitars bray and moan and seethe in displays of unsettling dissonance, channeling a sensation of mental derangement, which is enhanced by the maniacal quality of the vocals. When the rhythms slow and then tumble, things just get more intensely demented and doom-shrouded. Other words that leap to mind:  “hallucination”, “hysteria”, “horror”. Fascinating, and disorienting stuff.

The song stream is below, along with a teaser music video made by Jakub Moth at Chariot of Black Moth. 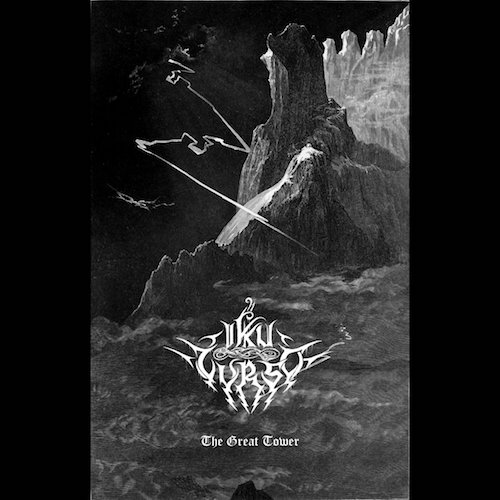 Although Iku-Turso appears to be a Finnish name, the band’s four members are spread out among Finland, the U.S., and the Netherlands. Their debut album The Great Tower was released by Wolfspell Records on CD, cassette, and digitally on September 22.

The two tracks I’m highlighting here, in the hope of inducing you to listen to the rest of this excellent album, are “An Adversary’s Funeral“. and “Chastise Thyself“.

The former is the second track. Its intensity is strong at the start, with the drums blasting away, a voice yelling in torment, and a melodic lead swirling and spiraling in a way that’s immediately memorable, and also tormented. When the pacing of the percussion slows, the song casts a depressive and haunting aura — but it’s that guitar melody, which is somehow both grief-stricken and grand, that’s the real grabber.

“Chastise Thyself” is slower, more symphonic, and even more deeply chilling — until the pacing accelerates and the music becomes more frenzied about three minutes in. But the melodies are again magnetic, and the vocals are simply terrifying. 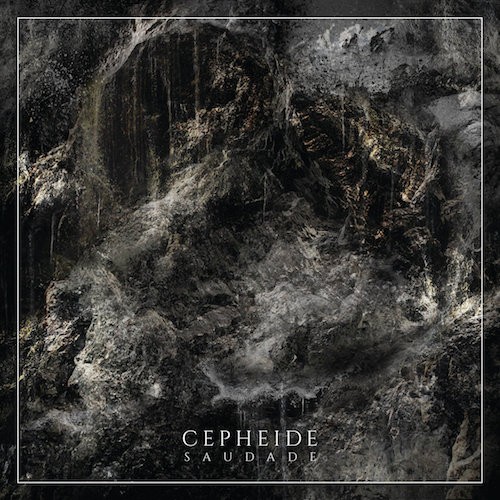 There are a lot of debut albums in this collection, including the next one. Its name is Saudade and it’s the first full-length by the atmospheric black metal band Cepheide, whose four members appear to be based in Paris. Saudade will be released on October 4.

The one song that you can listen to now is “La Lutte et l’Harmonie“. I thought it would make a fitting follow-on to those tracks by Iku-Turso. Its atmosphere is a mix of depressiveness and delirium, mortifying and majestic, with a swirling, intense, symphonic melody that glimmers and soars, and rising choral voices mixed with scalding rasps. It’s very easy to get caught up in the music’s wrenching passion, and to get carried away as it rockets toward its glorious crescendo.

I suspect that the number of people who are familiar with the 2012 debut EP of GGUW, Gegen Gravitation und Willensfreiheit (“Against Gravity and Free Will”) is a small group. But I also suspect those who have heard it (including myself) haven’t forgotten it. It’s very distinctive, and very disturbing.

In the year of that EP’s release, the sole person identified as the music’s creator, Wolfrano Ketzer, took his own life. But it has become apparent that Ketzer had other unidentified collaborators in GGUW, and they have carried on. Last week, a new EP was released digitally and on tape by Fallen Empire Records and New Era Productions, dedicated to Ketzer’s memory. A vinyl edition will be forthcoming from both labels as well.

The title of the new EP is Behauptungsanimalität and it consists of one, nearly-eleven-minute long, untitled composition. It will test your resilience, and maybe your sanity as well.

In English, Behauptungsanimalität means “Assertion of Animality”. For the first 40 seconds there is a buzzing sound punctuated by what sounds like a mallet striking wood. That’s followed by even more frenzied guitar buzzing, accompanied by frantic drum rhythms and a completely berserk voice (or voices). The effect is unnerving… and it just continues to run that way for about three minutes, after which the music settles into more of that hammering, set against a backdrop of waves rolling upon a shore and sparse ambient tones.

Things grow more ominous and spectral. Maybe gravity is letting go? And then everything begins coming apart again. The vocalist’s wails and shrieks and yells are frightening enough all by themselves, but that whirring, whining guitar amplifies their fearful effect. It does sound like someone’s inner animal has broken free of all constraints, all veneers of civilization stripped away and burned.