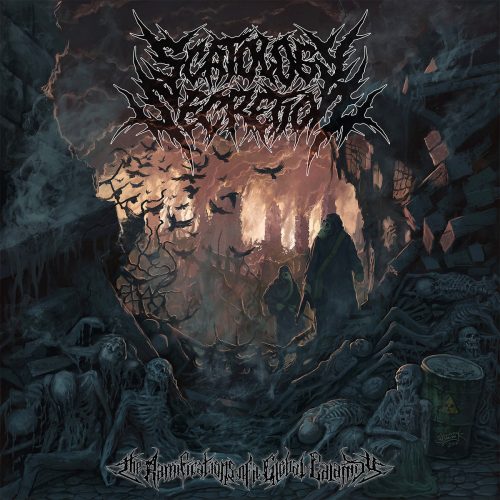 (Vonlughlio brings us another review of brutal death metal, this time focusing on the new release by the multinational band Scatology Secretion.)

This time around I decided to do a small write-up about a new BDM band that formed in the beginning of this year. The project is called Scatology Secretion, with none other that Justin Downs (from Human Excoriation, Vituperate, Purulent Necrosis) on vocals, Oscar Fixation (of Fixation on Suffering, ex-Cerebral Effusion) on guitars, and Squeezer on drums.

In their short time as a band they were signed by rising new BDM label Reality Fade Records and this past July released their first demo entitled Inauspicious Apocalyptic Inception. That struck me as one of the best BDM demos released this year, a display of old-school BDM that reminded me of Brodequin and to some extent Disgorge.

But that wasn’t all the band accomplished this year. Not long after the release of the demo the label announced they were going to release their first full-length in 2017 as well. At that moment I must admit I was a bit worried. I mean, they just released a demo, and usually it takes time for a band to work up to the next musical endeavor. Also, I wondered whether they would they keep the same direction or change to a different sound. Would they pull an Illud upon us fans? 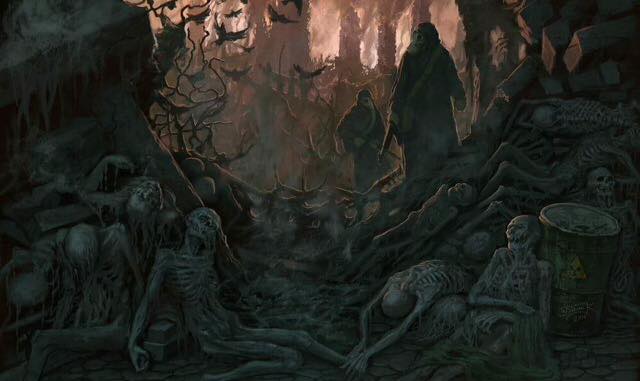 Well, the label disclosed a few songs before the release date, and it was a big “Fuck off Vonlughlio for having doubts”. These were truly punishing songs that captured the essence first witnessed in their demo. And with the arrival of the release date this past October 10th, they took a sledgehammer and shattered any doubts whatsoever.

Justin Downs again proves his talent and the diversity in his vocal patterns (I had to listen to Human Excoriation, and then this album), again making a name for himself in the genre. As time passes by, he shall be held up high with the greats of BDM. The riffs are addictive, and show diversity within the songs while melding with the blast beats perfectly. And the band continue to pay tribute to such groups as old Defeated Sanity, Infernal Torment, and Cryptopsy to some extent.

The lyrical themes concern the ending of humanity by viruses, chemical weapons, nuclear plants, and arms of mass destruction. This subject matter is also displayed on the cover art of the album, and the titles of the songs give a clear vision of the lyrical content. Here is the track list:

2 Responses to “SCATOLOGY SECRETION: “THE RAMIFICATIONS OF A GLOBAL CALAMITY””