Time once again to blacken the Sabbath. It was another savagely exciting week for the release of advance tracks from forthcoming albums, and five of those are in this post. I also had time to explore a few EPs and albums that came out recently, and I’ve included one of those here, too.

I nearly called this “Part 1”, because I have some other discoveries I’d like to recommend. I hope I’ll soon have time to write about those, too.

A new Taake album is always a welcome event, and the seventh one — Kong Vinter — will be released by Dark Essence on November 24. Last week Taake released the album track “Inntrenger“, which proved (to me at least) to be an interesting surprise. 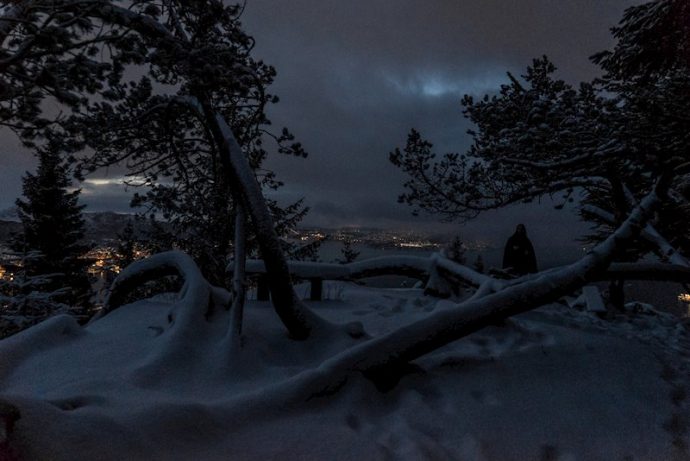 You would think I’d have learned by now not to be surprised by what Hoest concocts. “Inntrenger” is a continually changing movement, one that has an interesting lurching, swinging, off-kilter kind of rhythm and vibrant, chiming chords at its core. It also rocks, races, and drifts away into a dissonant, hallucinatory digression.

There is actually something dreamlike about the entire song, and something bright as well as perilous in the music. It will get your head moving, especially in the final minutes, but it has progressive metal inclinations as well. I love it.

Kong Vinter is 55 minutes long. It was recorded and produced by Bjornar Nilsen (Vulture Industries) at Conclave and Earshot Studios in Bergen. It includes photography by Christopher Zibell and artwork by Tom Korsvold. Dark Essence plans to release it in these formats: gatefold vinyl, digipak CD, digital. 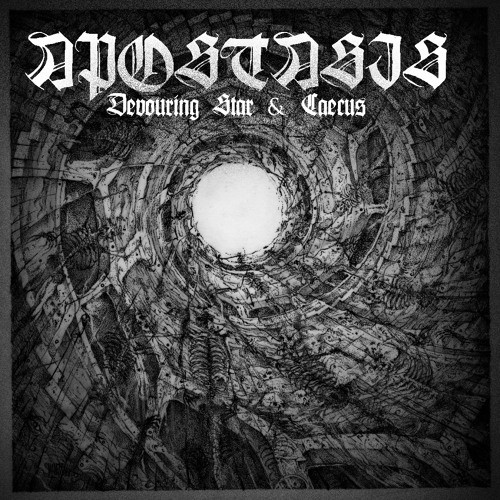 On some as-yet-unidentified date early next year Terratur Possessions will release a 27-minute, 12″ vinyl split (with a digital download) by Finland’s Devouring Star and the Scottish band Caecus called Apostasis. The A Side, which is the title track, consists of an 18-minute collaboration by the two bands. The B Side includes one individual track by each band, and those were made available for streaming last week.

In fairly short order, Devouring Star has made a prominent name for itself in the black metal underground, with a self-titled demo in 2013, the Through Lung and Heart debut album in 2015, and this year’s Antihedron EP. Devouring Star’s part of the B Side is “A Pale Monument“.

This song gives no quarter. It is a ferocious hurricane of squalling, dissonant riff abrasion, echoing shrieks of pure venom, howls of throat-tearing fury, spine-fracturing bass lines, and drum blasts, booms, and rumbles that sound like a mixture of thunder and earthquakes. The melodic character of the music conveys sensations of bleak, ominous majesty mixed with alien power beyond comprehension.

Even with the physically dismantling impact of the rhythm section, the song is spellbinding. You fall into a cold vortex of otherworldly energies and become lost.

We premiered this Scottish black/death band’s 2015 debut EP, Affliction, here. As I wrote then, it had become one of my “go to” short releases of that year, especially for those times when I wanted metal that would blast my head clean of annoyances and worries — and every other thought — and detonate a big bolus of adrenaline in my bloodstream. Vicious stuff, and highly addictive, too.

Our Norwegian comrade Gorger also favored Affliction when it was re-released in 2016 by Blood Harvest Records, characterizing it as a “declaration of war”:

No wonder I was anxious to hear the Caecus track on the Apostasis B Side, “Ascend To the Void“.

It makes for a good complement to Devouring Star’s track. It’s much shorter, and more relentlessly fast, violent, and destructive, with heartless death-metal roars in place of scalding shrieks. It dominates the senses with rapidly-writhing, cyclonic riffing, and jaw-dropping drumwork, but a bubbling bass can be heard throughout, and near the end the rhythm changes and it becomes a stomping juggernaut that spins off grim fanfares and shrieking tones of pure derangement.

I really can’t wait to hear what these two bands have concocted in that 18-minute collaboration that forms the A Side of Apostasis. 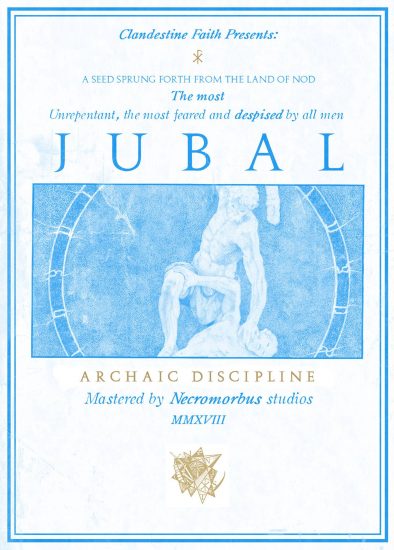 Clandestine Faith has quickly become a label whose releases I follow closely. Their first release was Samhara’s Deathkult Sutra in 2015; their second was Ho Anthropos Tes Anomias by Mystagos, which I reviewed and premiered here, And their third one will be a demo entitled Archaic Discipline by a band named Jubal.

Based on photos, it appears that Jubal is a duo, though their identities are unknown to me. I understand that they are based in the Netherlands. This demo was mastered by Necromorbus and features a cover illustration by Manuel Tinnemans.

The first track to be revealed is “Through Flesh and Bone“. The music here boils with wild, arcane energy, propelled by riveting drum rhythms, with vocals that are a vicious, cracked, goblin snarl. The waves of melody that move through this tumultuous song are bleak and bereft, but alluring. It succeeds in achieving that peculiar union of feelings that characterizes so much of what is best in black metal — the orgiastic and the chilling, the flesh-rending and the grief-stricken. It’s physically arresting, yet sends the mind wandering among strange visions. 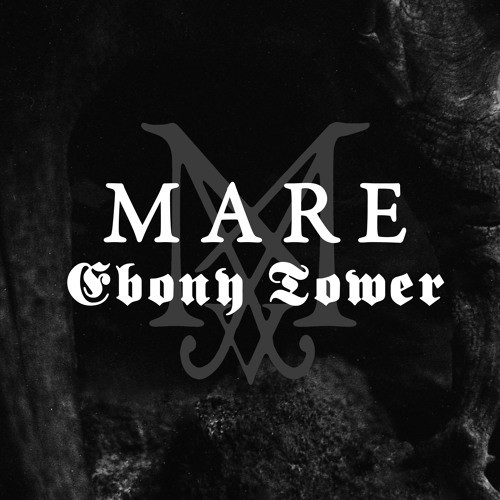 The Norwegian black metal band Mare shares members with such groups as Behexen, Dark Sonority, Black Majesty, Ritual Death, and One Tail, One Head. After releasing 5 demos or EPs, they have a new work on the way through Terratur Possessions called The Ebony Tower.

“These Fountains of Darkness” is the advance track released last week. There is a trilling lead paired with chiming, supernatural chords which surface in the song’s solemn and gloomy slower movements that conveys a sense of wrenching agony, and operatic vocals that burn with a similarly intense and stricken passion.

The song also races like a wind-whipped conflagration and thunders like an avalanche, driving the music to even greater heights of devastating emotional explosiveness. It proves to be an incredibly immersive and disturbing piece of music, one that captures treachery, torment, and terror, and wraps all those sensations in a shroud of occult mystery.

The Ebony Tower will be released early next year on LP, cassette tape, and CD by Terratur Possessions exclusively.

Now I come to the one full release I chose to include in this round-up. Entitled Nidhöggr, it’s the second album by the Danish black metal band Mûspellzheimr. It was released on October 30 by Amor Fati Productions, and I discovered it just yesterday thanks to a Bandcamp alert, although for now it’s only available on CD and vinyl, without a digital-only option (you get a download only if you buy a physical copy).

No band members are identified, and no names are granted to the song titles either. And the mysteries of Mûspellzheimr don’t end there. Indeed, an atmosphere of frightening mystery cloaks all the tracks, as does a thick, abrading coating of distortion (yet not so distorted as to obscure the pulse of the bass or soften the blows of the drums, both of which seem to land inside the chest cavity).

Nevertheless, the tracks don’t follow a uniform path, even within the confines of their own individual duration. They are sometimes stately, sometimes lurching, and mainly volcanically chaotic and crazed. The voices range from ear-liquefying shrieks to soaring clean vocals. Yet the eerie resonance of the melodies gives everything an unearthly feeling, as if demonic forces have been given a free hand, to cavort and feed on any semblance of human happiness, and to raise their horrid voices in praise of death.

You’ll have a hard time finding anything more raw and terrifying than these sounds, and yet the music somehow also achieves a mythic quality, with soaring tones that ring like chimes, leads that slither like gleaming serpents through the maelstroms, and grand ambient fanfares that, taken altogether, make the album sound like a war between heaven and hell.

I felt both exhausted and completely alive by the time I finished listening.