(We welcome back Comrade Aleks, freshly returned from the herculean labors that produced his new book, and his interview of Edmunds Vizla, vocalist/guitarist of the band Frailty.)

The Latvian band Frailty was actually founded in 2003, but the debut full-length Lost Lifeless Light appeared on the Russian label Solitude Productions only in 2008. They provided powerful, almost classic death doom metal with the kind of grim, desperate atmosphere that’s reflected in the album’s title; it’s a pretty fair deal.

The sophomore work Melpomene (Arx Prod) was a step further, as the band developed their sound and performed more remarkable stuff with a few individual features such as profound growls, melodic and utterly heavy guitars, and lyrics partly connected with Ancient Greek mythology. For five years there wasn’t news from them, and suddenly I’ve found that Frailty returned in March 2017 with a new album, Ways Of The Dead.

It’s better late than never, so we’ve done the interview with Edmunds Vizla (guitars, vocals) and explored the current mutations of Frailty, who turned in a more extreme, faster, and crueler beast, spreading extraterrestrial Lovecraftian horrors!

Hello Edmunds! So the band’s first release after the last five years is Ways Of The Dead, which appeared in March 2017. What have you done since 2012?

Hello! We began to write the material that eventually turned into Ways Of The Dead back in 2013, but some songs had even earlier beginnings, around 2008. We had to reinvent ourselves musically, to change the direction and the way we approached the work as a band. The last few years have been spent in a very creative atmosphere.

Those songs which were born back in 2008 – how much of those original tracks got into the album?

In 2008, we made 2 playable tracks – “And the Desert Calls My Name” and “Iä, Shub-Niggurrath!” The main parts for “Cthulhu” and “With the Deep Ones I Descend” also were written back then. Then we decided to store the projects, because it was not really the right time for that. 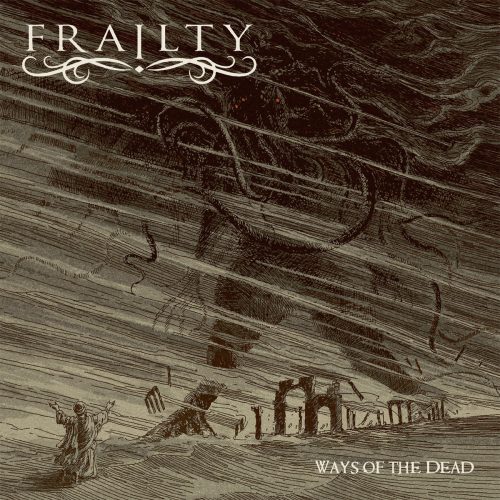 This time you released the album by yourself without any help. Did it become a problem to do it through the label?

No label is really interested in a small band such as Frailty, because we cannot generate profits for them. Metal music is as much commercial as pop music — on a smaller scale, of course, but nonetheless. So it seemed very natural for us to do everything ourselves, after being declined by some labels. Also, we do not live by playing music or selling T-shirts and CD’s. For us it is a hobby, a really expensive one, but we like it a lot.

But there were Solitude Productions, Arx Productions, and you did play a few gigs in Russia, and it looks like you love to play live. Did something change in your vision of the band?

The times have changed. There has been little to no communication with the mentioned labels during past years. We assume that it is really hard for them also nowadays to release new material, because everything costs money and CD sales have dropped significantly, due to the victory march of digital media. On the other hand, it is not going to stop; it is the future of music. So we have already embraced services like Bandcamp, Spotify, and YouTube. CDs are more like a memorabilia or souvenirs these days. So, does a small band really need a label?

We do love to play live, nothing has changed about that. But music generates no income for us. People at home would not really approve the shift of our careers toward full-time professional touring musicians with an uncertain future. So, we play selected and well-negotiated concerts. In this way, we can balance between the worlds of everyday life and music quite well, and no one gets harmed by that.

Do you feel significant differences in making everything the DIY way? Do you promote and distribute Ways Of The Dead on your own?

If you do it all by yourself, you are in control of everything. That is a positive thing. I believe that some promotion was done by some of our friends in the industry, however, this time the largest amount of work was on us and our management.

So how expensive is it to record and release a death doom album on your own?

It depends, but investments were made nevertheless. We recorded everything in our bass player Andris’ own studio, so it did not cost us more than a few packs of beer we drank recording the album. But we had to pay some money for mixing and mastering, for the album’s design and some other things we decided not to do ourselves. Next time, we are doing even more ourselves.

Frailty – The Beast Of Babylon

Ways Of The Dead turns out to be a more extreme album than Melpomene, I would say that it’s more chaotic, it’s essence is a primordial one. What influenced Frailty’s sound mutation?

The influence to change the approach came from the initial concept of the album. Back in the days, I was really excited about D. Tyson’s novel Necronomicon–the Wanderings of Alhazred, and dreamed to translate it into music. As it deals with characters from the works of H. P. Lovecraft, there could be no other way to interpret the story musically. It was meant to be more chaotic, evil sounding. But as you can hear in our new songs, we did not completely abandon our traditional style, because Lovecraftian themes always have some really visible aspect of fatalism in them.

How would you determine the features of the new material as its creator?

I’m not the only creator of the album’s material. This time other band members contributed significantly. For example, our guitarist Jēkabs wrote two songs on his own. We wanted it to be more diverse, more complex, so everyone put much effort into the work, and in the end all the songs have a collective signature. The features of the album could be change of tempos, from very slow to blast-beats, from melody to raw brutality. Nevertheless, it is still beautiful, this child of ours.

How much time did you spend in the studio on recording new songs? The album is pretty long — its duration is more than an hour. How did you build all the compositions piece-by-piece in this distorted and sinister monument?

It does not really matter how long the album is, as far as we are concerned. The story has to be told in its entirety. We also think that a passionate listener would not spend his/her time counting minutes and seconds, but would enjoy the music and the story it has to tell. We spent a couple of months in 2016 to record it; we did not rush. When we were writing the material, we sometimes re-made a certain song a dozen times over, to achieve the best possible structure of its composition. It was time-consuming, but we are happy with the result. 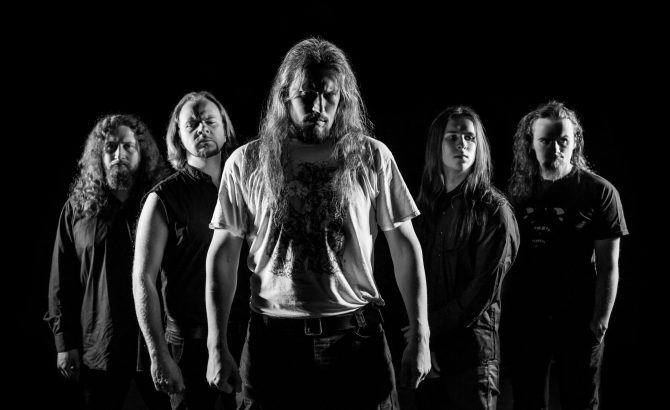 Are you happy enough to continue playing in the same direction on the next album?

It is important to try something different each time, to go forth and not to stagnate. Our songwriting skill has become better during the time we spent making of Ways of the Dead, and we will certainly bring some elements of our current style into the new material.

What was the most difficult thing in this recording session?

Not really difficult, but somewhat unusual, was to record live the vocal effects, like choirs and some savage background grunts and whispers. That was real fun to do; we spent a couple of nights of doing this, because we wanted to avoid the dense digital orchestrations we had before. The real voices add some primordial savagery to the whole thing.

The album’s lyrics are based on Lovecraft’s mythology, which seems something new for Frailty. So why did you turn to this topic, as the metal scene nowadays seems to be oversaturated with bands paying homage to extraterrestrial horror?

In truth, we did not care at all that the scene has been saturated by Lovecraftian topics today. We wanted to bring our own interpretation of a horror classic. If someone finds this fascinating, we are happy with that. As I said before, the album is based on D. Tyson’s Necronomicon, it musically retells the story of the novel. With Lovecraftian characters, horror, and a dark sense of humor – how can you avoid something like that?

Is Ways Of The Dead focused only on the original story or did you also add your own interpretation to it? I see that at least “The Beast Of Babylon” brings some new elements to this concept and expands it further to apocalyptical proportions.

“The Beast of Babylon” is a part of D. Tyson’s story. It has nothing to do with Biblical narratives. In our case, it is a supernatural alien monster, a spawn of the goddess Shub-Nigguratth, which happened to live in the ancient ruins of Babylon. It was very dangerous, but if you knew how to approach it, many precious secrets could be revealed. We really encourage everyone who is interested in horror fiction to read the actual book; it’s going to be a great experience!

You had a brief tour with Woe Unto Me not long ago. How was it? What are your best remembrances of it?

We have been on tour with them before, and I have to say that we have become two completely different bands. I would say that Frailty as a band is somewhat more introverted on a personal level, and more extroverted on the stage. They are an opposite of that. Our friends like to party hard after the shows, but we now prefer more quiet and privacy. Nevertheless, we got along fine, and we wish them all the success they can achieve.

How often do you get out of Latvia for such tours? And how often do you play live in your country? Do you feel that Frailty is a demanded band there?

We don’t really tour that much and our shows are a rarity in our home country. It is mainly because of two reasons. We all have important day jobs and families to attend. The other reason is that touring costs money and we have to plan everything carefully, to avoid any unnecessary expanses. We know perfectly well who we are and what our limitations and possibilities are. But, nevertheless, we are always attended well in Latvia. In other countries we usually try to put up our best performance, so it is highly likely that the local audiences will feel great after our shows, no matter how many of them come to the concert.

Okay, Edmunds, thanks for your answers. I have a last one – when do you plan to return with new material? Do you have ambitions to spread Frailty’s Word as soon as you can?

We can say that new material is being written at rocket speed compared to Ways of the Dead. We already have 6 songs, and we are planning to do some more, so we would have 10 or 12 tracks of material before we start to record it. Everything is going very easy this time, because the work we did before at reconstructing our approach and learning new things is paying off. We are happy with that. As for the ambitions – who can really say what the future holds and what opportunities may be given to you? Just have to keep one’s eyes open.