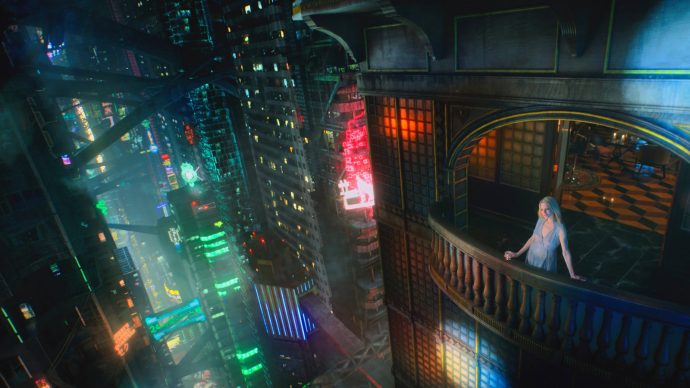 The book of the same name, by Richard Morgan, is an old favorite of mine; I’ve read every other sci-fi book he’s written, too, but I always thought it would be great if someone turned Altered Carbon into a movie or TV series. So, with some extra time on my hands, this was a temptation I couldn’t resist. 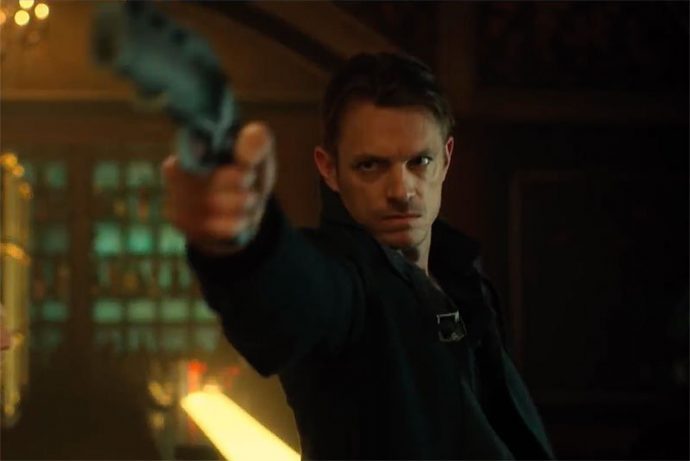 I binge-watched the first four episodes. I’ll probably watch at least that many more at some point today or tonight. I think the acting from the main performers is usually only average (with some surprising moments of real power), but the dialogue is generally good (and sometimes superb), the actors in the smaller roles are uniformly outstanding, it’s a visual feast, and I’ve been enjoying the soundtrack music as well. And of course I still love the story.

One writer for The New York Times called the series “a low-rent ‘Blade Runner‘ knockoff with basic-cable production values and premium-cable nudity”. A different writer for the same paper penned this blurb in a column on “12 Shows We’ll Be Talking About In February”:

“If the recent ‘Blade Runner‘ sequel didn’t satisfy your thirst for futuristic detective tales, this adaptation of the novelist Richard Morgan’s 2002 cyberpunk classic should do the trick. Joel Kinnanman (‘The Killing’) plays Morgan’s gruff, tough action hero Takeshi Kovacs, a mercenary whose consciousness was stored away for hundreds of years before being slipped into a new human ‘sleeve’ and employed to solve a murder. The series combines stunning science-fiction imagery with a traditional film noir plot, putting both in service of disturbing speculation on how humanity might evolve — and in some cases become more depraved — in the centuries ahead.”

At the end of each episode, you hear an excerpt from a different song — not songs written for the show, but songs picked (I guess) because they seem to suit what’s happening at the end of the episode. At the end of the third episode, the song is an excerpt of a woman singing “O Death“. I knew the song, which dates back to Appalachia in the 1920s (according to The Font of All Human Knowledge) and has been recorded by lots of people in lots of different ways under slightly different titles, but I’d never heard the recording that played at the end of that Altered Carbon episode, which I thought was striking.

So, before starting episode four, I started hunting for that particular version. It took a very long time for me to find it, since it’s an old recording and I didn’t know who was performing it. In the process of trying to track it down, I came across other versions, some that I’d heard before and some that I hadn’t. Two versions of the song were by metal bands — and one of those was digitally released just last week, though I hadn’t yet found time to listen to it.

I’ll make my way toward the metal versions of “O Death“, but I want to begin with the version of the song that came at the end of that Altered Carbon episode. This is “Death Have Mercy“, performed by American blues and gospel singer Vera W. Hall (1902-1964), recorded by Alan Lomax in the summer of 1959:

Ralph Stanley died in June 2016. He was a world-famous bluegrass musician with a long history, and he reached a new generation of listeners in 2000 (at the age of 73) through his a cappella recording of “O Death” for the soundtrack to O Brother, Where Art Thou?. This video shows him rendering the song live on stage, also a cappella.

I’m not positive, but I think this clip comes from Down from the Mountain, a 2000 documentary and concert film featuring live performances on May 24, 2000, in Nashville by the country and traditional music artists who participated in the soundtrack to O Brother, Where Art Thou?.

When I began the search for Vera Hall’s version of the song, I scrolled through page after page of Google search results (which never did include the Vera Hall song), about half of which consisted of links to a version of “O Death” recorded by Jen Titus, which was used in a 2010 episode of the TV series Supernatural, which is now into its 13th season and which of course I’ve never watched (see first paragraph above). Jen Titus’ voice isn’t in the same league as Vera Hall’s, but I do like this spooky, modernized version of the song:

Now we’ll get to the metal versions of the song that I promised at the outset. The first one is by NCS favorites A Hill to Die Upon from their 2014 album Holy Despair. This version cranks up the energy dial compared to the preceding, more traditional renditions, and of course the vocals are harsh (but joined by the clean tones of a female vocalist in the song’s slower and more beautifully somber chorus sections). The melding of the jolting, high-powered metal attack and a crystalline harp melody in the song’s finale was another inspired choice.

And at last we come to the metal version of “O Death” that was digitally released just last week through Bandcamp. This version is by some other NCS favorites, Colorado’s Khemmis. It goes under the name “A Conversation With Death“, and the song is part of split entitled Fraught With Peril by Khemmis and Spirit Adrift, originally released on 7″ vinyl last summer. Here’s Khemmis‘ introduction to the song from the Bandcamp page for it:

“‘Conversation with Death’ is an early 20th century Appalachian dirge written by Lloyd Chandler, an itinerant Free Will Baptist Preacher from North Carolina. The song is best known as ‘O Death,’ after being famously covered by Ralph Stanley in 2002. Our interpretation pays homage to both versions and is a reminder that even wealth and power cannot stop the inevitable: death comes for us all.”

Enjoy Khemmis‘ crushing, soulful rendition of a song that even in its earliest recordings is metal to the bone.