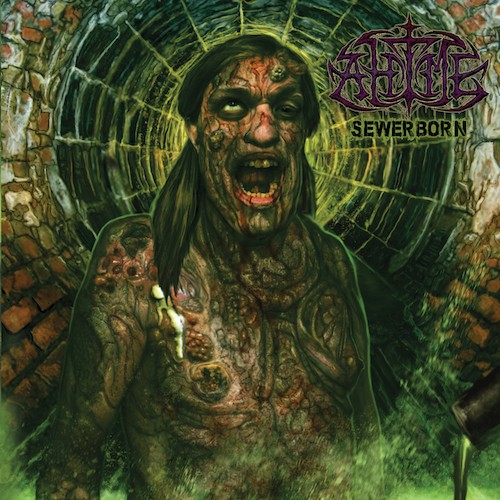 When last we visited Ahtme from Kansas City, Missouri, it was almost two and a half years ago, not long after they had signed with Unique Leader Records. At that time, Unique Leader was on the verge of reissuing the band’s debut album The Demonization and we were hosting the premiere of a video for one of that album’s demonizing tracks. The reissue was a paving of the way toward something new from the band, and at last, it has arrived.

June 1st is the date set by Unique Leader for Ahtme’s new album, Sewerborn, and we are in the happy position of again hosting a premiere, this time for the new album’s final track, a merciless but insidiously infection brutalizer named “Subhuman Remains“. 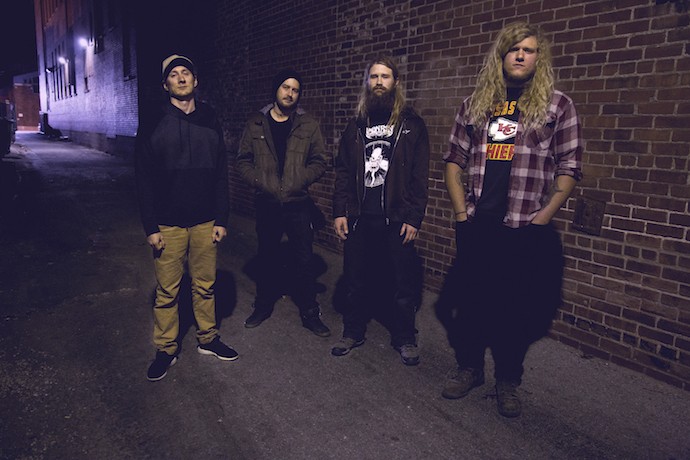 This song may be the last song on the album, but it manifests a kind of central vision that runs through the whole release. As the band explain:

“‘Subhuman Remains’ unintentionally wound up being the main inspiration for the concept behind the whole album. After we wrote it we looked back through all of the songs and realized there’s a basic common denominator between them, and they all focus around the plain and simple fact that we (human beings) for the most part are disgusting and horrible. We went with a literal interpretation of the lyrics for this song when we shot this video, on Easter Sunday, in the middle of an ice storm and half of us wound up practically getting pneumonia because of it. At least we didn’t have to eat anything nasty or puke this time around. Cheers!”

When the song kicks in, it’s a rough, rude, and ruthless experience, more primitive and feral than you might be expecting from a tech-death group, but a hell of a strong neck-snapper. While vocalist Brent Turnbow barks the lyrics in a gruesome, guttural roar, his bandmates inflict a barbarous array of jolting, jabbing riffs, rapidly scissoring leads, and a mix of double-bass thunder and brain-battering snare rhythms.

It’s hard to resist chanting along to the refrain of SEWERBORN!, just as it’s hard to look away as the band act the part of blood-stained, headbanging, mid-wives and perform the music on instruments made from landfill refuse. You might smile, you might nod in grim agreement, but either way, you better loosen up your neck muscles for a workout.

Sewerborn consists of 11 tracks running 47 minutes, and it was recorded with Navene Koperweis (Animals As Leaders, Animosity), Zack Alvey, Ethan Erisman, and mixed and mastered by Zack Ohren (Immolation, Carnifex). The nasty artwork was created by Tony Kohl.

Get your order in for Sewerborn via the links below — and in case you need another taste of the album, we’ve included the band’s video for “Subservient“, which premiered last month at DECIBEL.

One Response to “AN NCS VIDEO PREMIERE: AHTME — “SUBHUMAN REMAINS””