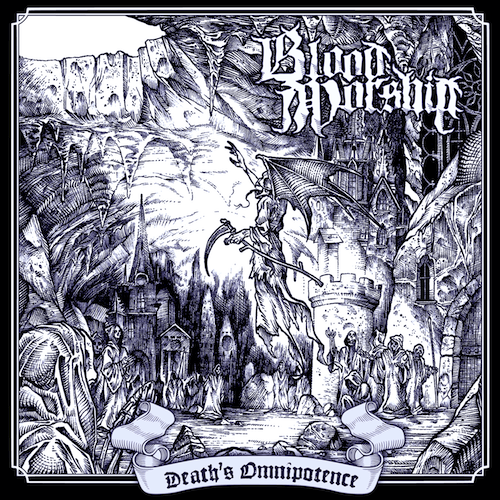 Death’s Omnipotence is an apt name for the first EP by the Swedish black metal band Blood Worship: The deep shadows of death loom over the music, and the Great Leveller also strikes with implacable savagery. It is the sound of souls scythed out of existence and of survivors driven to the brink of devastation by their anguish. The music gets heads moving as it lashes and thrashes with explosive energy, and it just as effectively puts a deep chill down the spine. It is, in short, a hell of a good debut.

Blood Worship is a new band, the brainchild of Stockholm-based Astrophobos guitarist Martin Andersson, who also plays bass and contributes backing vocals on the EP. He was aided in the recording by Astrophobos bandmate Micke Broman, who is the lead vocalist here, and by session drummer David Folchitto (Fleshgod Apocalypse, Gravestone).

One track from the EP — “Rites of the Inner Shrine” — previously premiered at DECIBEL, and today we present another in advance of the June 15th release date: It’s the EP’s closing track, “Shadows Etched In Stone“. 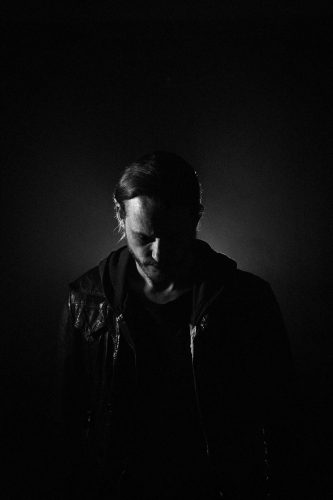 Where “Rites of the Inner Shrine” was an up-tempo, turbocharged, highly headbangable adrenaline rush, “Shadows Etched In Stone” reveals a different side of Blood Worship’s interests by drawing the cold cloak of doom around the sound, and pulling the listener’s mood into a place of freezing gloom and spectral peril.

Until roughly the final frenetic minute, when the blasting begins and the guitar boils, creating a wrenching air of wretchedness, the cadence of the song is slow and almost lurching, the methodical snap of the snare and the magnetic reverberations of the main riff only occasionally giving way to bursts of double-bass and seething tremolo vibrations.

Micke Broman’s cold, murderous, ice-cracking, goblin snarl is a fearsome, remorseless sound, but the dimensions of the song also include a melancholy arpeggio that’s soulful in its resonance when it appears, and lingers after the song has finished.

We do recommend that you listen to both of the tracks that have now premiered to get a sense of the EP’s dynamism, and we’ve made that easy by including both below. We’ve also included a link for the pre-order of the EP. Digipack CDs, t-shirts, and download orders are available through Bandcamp. Streaming and downloads are also available through iTunes, Amazon, and Spotify.

Death’s Omnipotence was mixed and mastered by Marco Mastrobuono at Kick Recording Studio, and the eye-catching cover art was created by Nate Burns.