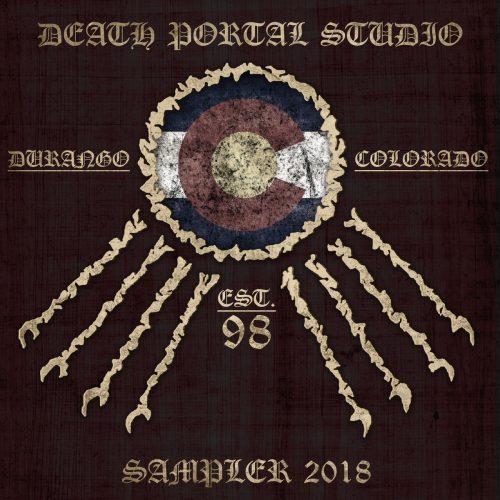 The songs here provide a rich listening experience, launched in electrifying fashion by the explosiveness of a jolting, turbocharged track by the Italian black/death band Gôr Mörgûl and an equally blood-pumping rush of multifaceted sound courtesy of the long-running, genre-bending Russian band Satarial.

Last fall we had the good fortune of premiering a track from the second album by the Quebec City  strike force Hak-ed Damm, and another song from that album follows the first two, delivering a strafing-run of incendiary but irresistibly head-moving black metal.

Last fall we also premiered a track from the debut album by the Colorado black metal band Sar Isatum, accompanied by a vivid introduction courtesy of our Norwegian ally Gorger, and another track from the album provides the first chance you’ll have to catch your breath as you move through the sampler. But breathe quickly, because this immense, majestic song becomes a bonfire of barbarism soon enough.

The Athenian black metal band Chaoscraft released their second album in February of this year, and a song from that album aptly named “Command of the Serpent” delivers its sinister, reptilian ministrations to your ears next with a dose of mercurial, writhing riffs, battering percussion, and raw vocal vehemence.

Sirens wail in “Armoured Death”, a track from the second album (Beyond This World’s Illusion) by the Turkish black metal band The Sarcophagus, released last year, but the warning doesn’t really prepare the listener for the striking dynamism of the song’s changing tempos and morphing moods. By contrast, “Hymn Sujudmaut” by the Indonesian black/death metal band Sereignos keeps the throttle wide open from start to finish, ripping and tearing in a blast of electrifying, blood-lusting, viciously thrashing mayhem.

Blackness Unfolds is the second album released by the Belgian black/death band Zardens (released in 2015), and it’s the source of the sampler’s eighth track, “Among the Dead”, a sinister amalgam of mystery, moodiness, and thrash-driven menace, accented by an exotic, flame-throwing solo.

Samplers such as this are valuable in part because they can introduce listeners to bands they might never have heard before, and like Zardens, the Italian black metal band Thrymheym is an exciting new discovery for us, thanks to this sampler’s ninth track, which comes from the band’s Eradicazione EP, released by Death Portal earlier this year. If you’re looking for a deliriously demonic assault of roiling, battering savagery augmented by raw vocal viciousness, you’ll find it here.

In the spring of this year we premiered tracks from two reissued, remastered albums by the prolific Tasmanian black metal / ambient project Striborg, Spiritual Catharsis (2004) and Mysterious Semblance (2004). “Beneath the Fields of Rapacious Blood” comes from the first of those reissued albums. It’s safe to say that no one sounds quite like Striborg; this hallucinatory, blood-freezing track is best experienced with no further spoilers from me.

This superb sampler closes with “Infernal Vestiges”, a song from Kingdoms of the Black Sepulcher, the second album from the New Mexico black metal band Aetranok that was released just a few months ago (and from which we premiered another song in February). It makes for a fitting follow-on to Striborg‘s creation, providing a haunting, ritualistic, and ferocious experience steeped in a broth of sulphur, blood, and hallucinogens.

And with that perhaps over-long precis, we leave you to experience these 11 tracks for yourself. You can get it for free at Bandcamp — but throw some money toward Death Portal if you appreciate the music and want to support the continuing efforts of this distinctive underground label.