Once again without warning, but this time more than nine years after the last album, Funeral Mist launched a Bandcamp page yesterday for a new album, and it didn’t take long for word of it to spread like wildfire through the interhole. There’s no music to stream yet, but the event is so significant that I couldn’t resist including what little news we have so far.

The name of the album is Hekatomb, it seems to consist of 8 tracks, and the release date is June 15th. I wouldn’t be surprised if there is no music to stream until the full album is provided on that day, which isn’t far off. You can pre-order it now in a variety of formats here:

The debut album of the Portuguese band Gaerea, Unsettling Whispers, consists of seven songs that are conceptually linked. Five of those have been premiered at various locations across the web so far. In other editions of this column, I’ve written about two of those tracks (“Whispers” and “Absent”), and for the sake of completeness I thought I’d recommend the other three.

The most recent one, “Cycle of Decay“, debuted at Metal Injection late last week. “Extension To Nothingness” premiered at Invisible Oranges in the second week of May. The third song I failed to feature when it came out, “Catharsis“, comes with a mysterious but beautiful music video, and it debuted at Metal Sucks and Metal Hammer. With so much attention already devoted to the album, I normally would have focused on something else more needful of the attention, but I’m such an ardent fan of what Gaerea are doing that I can’t resist.

On the other hand, I won’t attempt to dissect these tracks, one by one, but instead say that they are very much worth your time because they so passionately and powerfully convey sensations of annihilating devastation, wrenching grief, the horrors of powerlessness in the face of death. They also open doors to haunting visions of wrath and remembrance. Intense, and intensely memorable music. 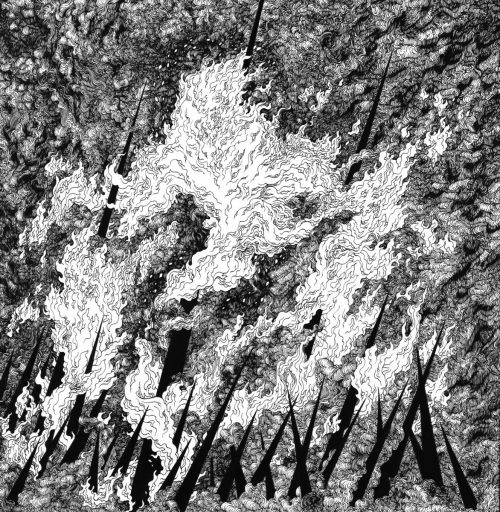 On June 8th the Brooklyn-based solo project Vilkacis and the Dutch band Turia released a four-song split, with cover art by Yu Rim Chung, and physical editions available through labels in both North America and Europe. Both bands have done impressive work in the past, and do so again here.

The two Vilcacis songs (created by Michael Rekevics of Fell Voices, Vanum, Vorde, and Yellow Eyes) are “In the Night’s Grip” and “Final March Into Flame“.

Fire and fury… warfare on the battleground of the soul… a stiff boot kicking down the walls of the cage that daily life builds to confine the spirit… those are the feelings I get from “In the Night’s Grip“. It rushes at high speed, the riffs burning like an acetylene torch, the drumming in overdrive, the melodies rocketing toward the sun, the vocals a skin-shivering roar of unhinged agony and defiance. The conviction that comes through is almost frighteningly intense, yet the music is also inspiring.

By contrast, “Final March Into Flame” is stately in its pacing, and depressive in its atmosphere, a funeral march toward a pyre, but the glow of those hungry fires comes through as well in the high, chittering and glittering leads, perhaps pointing toward some unseen glory within the waiting abyss of despair. You see the glory more clearly revealed in the heart-piercing strains and choral voices that draw the song to a close.

I had the pleasure of premiering songs from both Turia‘s 2015 debut album Dor and their second full-length Dede Kondre; both were hallmarks of a band willing to go their own way rather than slavishly follow convention, and both were excellent. The two tracks that Turia contributed to the split with Vilkacis were recorded during the sessions that produced Dede Kondre.

These songs reveal unconventional aspects, too. The squalling shroud of noise, the methodical drum booms, the turbid bass lines, and the plaintive, wraith-like leads that ring out in “Tuchtroede” help set it apart. While the song strikes with torrential force, and the vocals are absolutely scalding, there’s also something dreamlike and ephemeral about the music, something unearthly and entrancing that radiates from the midst of all the turmoil and tension. The song also sticks in the head like a spike.

“Tuchtroede” flows right into “Spiegel der Eenvoudige Zielen” as if they were two parts of the same song. It seems even darker, more ominous, more perched on the edge of deteriorating sanity. The tension builds even further until an incredibly vibrant guitar lead, beautiful but anguished, jumps out, soars, and becomes increasingly spellbinding as it loops over and over again. At the end, the reverberating notes slowly blare, chime, and drone, the drums having been silenced, and you really do feel by then as if you’ve left the earth behind.

More remarkable music from a very creative group… and man, what a perfect guitar tone they’ve found for these conceptions!

P.S.  The Turia Bandcamp page states: “Lyrically, Turia‘s side deals with the writings of Marguerite Porete, a 13th and 14th century French mystic. Through her autonomous union with the divine, bypassing the patriarchal authority of the church, she was deemed a heretic and subsequently burned at the stake.” 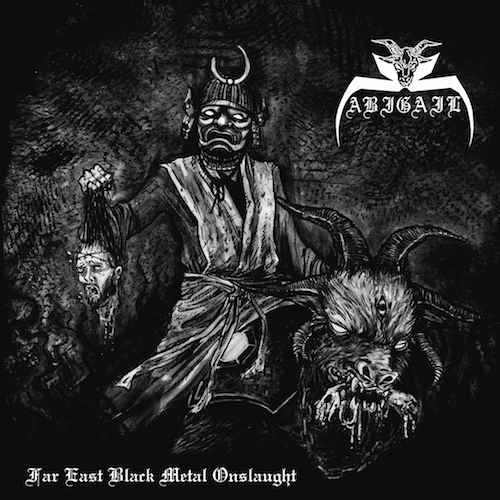 I can’t help but think of the preceding tracks in this column as “serious music”. They evoke strong emotions — grief and loss, fear and fortitude, striving and triumph. But human life is more than such experiences. There’s also drinking, fighting, and fucking. So let’s close with Abigail, shall we?

Named for King Diamond’s famous album and following in the footsteps of bands such as early Bathory and Venom, this Japanese band have churned out five albums and about 5,000 splits, EPs, and live recordings since the early ’90s. I don’t pretend to have heard all of it, but brawling, alcoholism, and sex do seem to form the meat of the lyrical themes (pounding meat, to be precise), along with a healthy dose of Satan.

The latest Abigail output is yet another short release, a four-track 7″ EP named Far East Black Metal Onslaught that will be released by Hellprod Records on August 7th. The final song in today’s playlist, which debuted within the last week, is the EP’s second track, “Nuclear Hammer“.

All kidding aside, this particular track rips… and it’s meaner than demon dogs at the gates of hell. And I think with that I’ll just leave you to it: