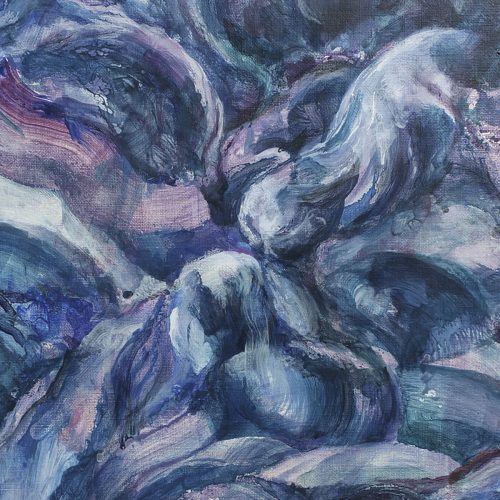 Once again, my plan for this week-long series has failed. Rather than catching up on new music from the last two weeks, I’ve instead been diverted by late-breaking releases. Moreover, rather than two new songs by only two bands, this collection includes music from three groups, beginning with a complete EP.

I discovered this EP yesterday thanks to a recommendation from occasional NCS contributor Conchobar, about a half hour before seeing a Bandcamp alert for the EP from Pest Productions in our e-mail. Conchobar characterized it as “very ‘post-black’ but in a very non-cliched way”.

I’ve spent a little time (not a lot of time) hunting for info about Pale, but have found nothing so far. Don’t know who’s in the group or where they’re located, and they’re not on Metal-Archives, so I assume this is a debut release. Their EP is either untitled or it’s named EP.  (UPDATE:  Thanks to Jakob in the Comments to this post, I now know that Pale are from Japan and released a debut demo last year, and they are indeed in Metal-Archives — here.)

“Post-black” is about right. Tremolo guitar and heavy reverb are features of the music, as are vocals in the vein of scorching, hydrochloric-acid shrieks and hollow, heartless roars. The music wears its emotions right out on its sleeve — angst and pain, but also resilience and grandeur. And the contrasts and dynamism within the music are impressive.

Thanks to a granite-heavy low end, the rhythms punch hard and consistently get your head moving. The prominent bass is performed with agility, and the drum-work is razor-sharp, melding beautifully with the changing energies of the songs and often stealing the spotlight without being “showy”. And on the other side of the spectrum, the melodies have a gleaming and often ethereal quality — mixed with doses of unnerving dissonance.

The songs don’t stay in the same lane for very long, and that’s part of their appeal. The music is exuberant and aggressive, anguished and introspective, tumultuous and moody. The first song, “Turquoise”, flows right into the second one, “Juvenile”, to form what comes across as one long song to open the EP. And by the time those two had finished, I was well and truly hooked.

“Hortus Sanitatis” is a long track standing alone, and it takes its time unfolding, changing moods and building in power. There’s a yowling, weeping solo in the song that sounds like a violin but is probably just a well-chosen guitar effect — either way, it’s spine-tingling — and the grand, soaring, soulful melody at the end is the kind that almost pulls your heart from your chest.

“Gossamer” and “Zodiac” are shorter gems, the former beginning in a dark charge but elevating to a kind of resilient transcendence edged with melancholy, and the latter more rhythmically potent, launched by a jabbing, jolting, skittering riff and an open-throttle drum drive, building anticipation, and finishing strong.

Today is the official release date for Pale’s EP, via Pest Productions, though it’s been available to stream on Bandcamp since yesterday. It’s a classic example of a bolt from the clear blue sky — a big and wondrous surprise that should not be missed. 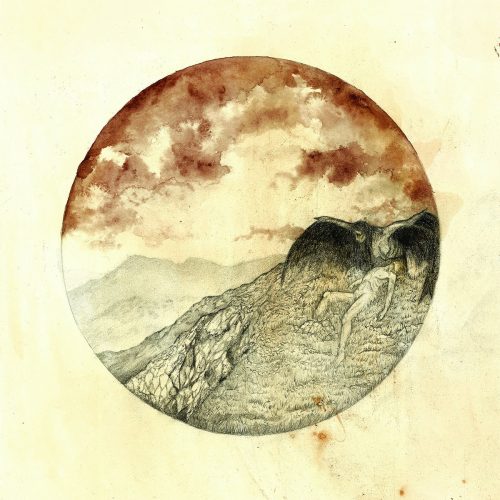 This next item is one I’ve been anticipating with great eagerness: At last, Boston-based Fórn will be releasing a new album, via Gilead Media (who are killing it this year). According to the new Bandcamp page for the album: “Divided between two Acts, Act I: Depersonalization & Act II: Derealization, Rites of Despair explores themes of isolation, depression, decay, tumultuous self discovery, and abandonment”.

The advance track that premiered yesterday through a music video is immensely powerful, the kind of song that gets the slow headbang going, eyes closed, spellbound, emotionally crushed — all those things.

““Manifestations of the Divine Root” is monstrous and haunting, mountainous and ephemeral. Heavy on the reverb and heavy in almost every other respect, it moves slowly but powerfully, the earth-shaking drum-and-bass tandem and the titanic chords posing a serious threat to your spinal integrity, and the gargantuan, roaring proclamations and gruesome, agonized howls posing an equal threat to your mental well-being.

There is true misery in the groaning, snakelike riffs and eerie reverberating notes, and the scalding, shrieking, paranormal guitar lead that highlights the song’s crescendo of intensity gives off an unearthly light. After an interlude of slow, spectral strumming and chilling ambient shimmer, the music swells in volume and power again, capped by a finale that features a wailing, sobbing solo which radiates wretchedness.

In the video, “Manifestations…” is preceded by another track, described as follows:

“The opening movement of Fórn’s upcoming LP Rites of Despair, 涂地 is a collaborative effort with Lane Shi of Elizabeth Colour Wheel, translating from Mandarin Chinese as a meaning of ‘all over the ground’.

“The word can be separated into two: TU涂 and DI地; ‘TU’ means paint over something while ‘DI’ means ground, or soil — together they form an emotion to describe a large scale of overgrowth. This theme continues as 涂地 builds a desperate sonic landscape that feeds into the album’s second track, “Manifestations of the Divine Root.”

“The pair form a juxtaposition that is thematic of the album as a whole. While 涂地 lays foundation to the albums’ contextual battle between melody and dense sonic layering, ‘Manifestations’ simultaneously tears down and expands on those themes, bringing with it an atmosphere teetering between delicacy and root-rattling abrasiveness.”

The video also comes with this warning: “This video may potentially trigger seizures for people with photosensitive epilepsy.” 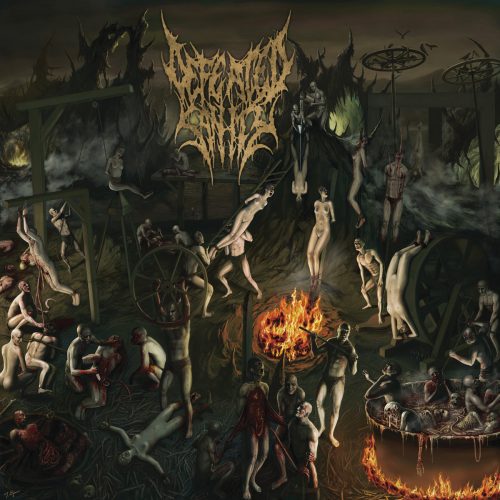 Defeated Sanity’s Chapters of Repugnance was first released in 2010. On August 17th of this year, Willowtip Records will re-release it in a deluxe digipack and limited-edition LP with three bonus tracks. One of those bonus tracks is a new song named “Insecta Incendium“, which popped up this morning on YouTube and Bandcamp — and man, what a rush it is.

This is a Grade A example of alien warfare in audio form — machine-precise but viciously deranged. Anchored by a remarkably agile bass performance and megawatts of snare-drum electrification, it’s fast, bludgeoning, jarring, insectile (yes of course it is), and fluid, with turn-on-a-dime tempo changes, freakish arpeggios, clobbering grooves, and gruesome guttural roaring in the mix.

I had to wake up at 3 a.m. this morning. Because my brain wasn’t working right, I listened to this track before even beginning to sip the coffee, after which I didn’t need the coffee.