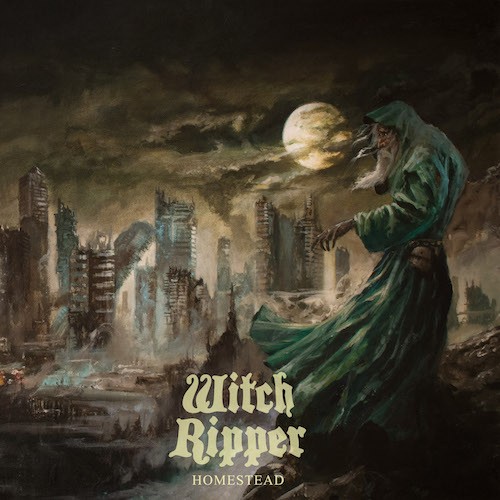 After the demise of the impressive Minnesota death metal band Iron Thrones about six years ago, its members moved on to other things. Bassist Curtis Parker moved on not only musically, but also geographically, relocating from Minneapolis to Seattle where he launched a new project named Witch Ripper. At first, it was essentially a solo project, though Parker’s ex-Iron Thrones bandmate Pete Clarke collaborated as the drummer on Witch Ripper‘s self-titled debut EP, which was released in 2012.

I heard about that 2012 EP not long after it came out, and found it hugely entertaining. As I wrote then, it brought to mind the likes of Mastodon, High On Fire, Neurosis, and Helms Alee, channeling the power of the riff at high-megawatt levels of addictive hookiness, but also delivering layers of memorable melodic complexity that made it stand out from the stoner crowd. You could be swallowed up in hard-rocking, hard-rolling jams one minute, stomped-on hard the next, and swimming off on astral streams the next. I immediately started looking forward to the next Witch Ripper release. 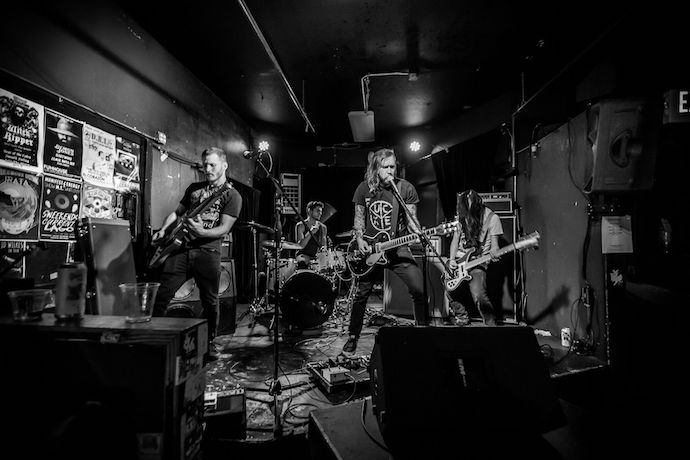 That didn’t happen in a hurry. In the years that followed, Parker fleshed out the band’s line-up, and Witch Ripper began to gig relentlessly, becoming a well-known quantity in Seattle’s metal underground, while also working toward a follow-up to the Witch Ripper EP.

Finally, that follow-up is finished — a debut album named Homestead — and it’s awaiting a September 28th vinyl release by DHU Records. I’m delighted that we get to present the first single from the album, which comes packaged with a lyric video that makes good use of the cover art (created by none other than Adam Burke, who’s a big personal favorite).

“The Witch” is the name of this first excerpt from Homestead, and like the preternaturally frightening but irresistibly seductive creature that’s the subject of the song, the music is the Devil’s gift from the night — a heavy, proggy, sludgy, psychedelic trip that, like its namesake, manages to be pitch-black and menacing, as well as magically alluring.

It’s also a rumbling, heavyweight head-wrecker, driven by battering, acrobatic drumwork, a lead-weighted bass performance, and hard-punching pulsating riffs, with the kind of raw and ravaging vocals that convey vehement, blood-lusting intensity. And along with soaring, swirling, and soulful melodic hooks, the track also includes a pair of beautiful guitar solos; the one in the sixth minute is absolutely glorious, paving the way to an incandescent finale. 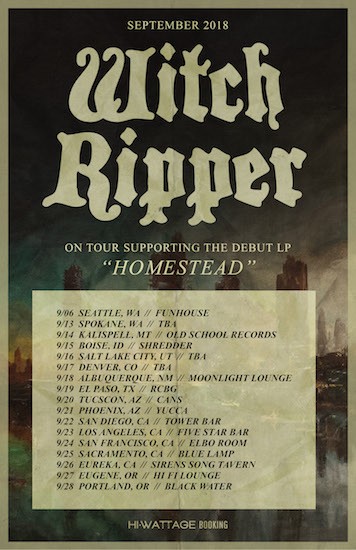 As noted, September 28 is DHU Records‘ official release date for Homestead. It will be available in two multi-colored vinyl editions (“Wasteland“, limited to 90 copies, and “Swarm“, limited to 150), and it will also be released digitally. Pre-orders will become available via the first link below at 7:00 p.m. CET on August 24th.

And in other Witch Ripper news, as you can see from the poster above, the band will launch a tour in support of Homestead in September. If you have a chance to catch these dudes live, don’t miss it.

8 Responses to “AN NCS VIDEO PREMIERE: WITCH RIPPER — “THE WITCH””