(This is DGR’s typically detailed review of the new tenth album by Anaal Nathrakh, which will be released by Metal Blade on September 28th.)

It’s pretty safe to say at this point in the career of Anaal Nathrakh that the group have developed a steady formula and groove that is instantly recognizable as their music whenever you hear it, making them one of the easiest groups in the world to pick out of a playlist. You could even say that they really established that sound about four albums ago and since then have been slowly iterating upon it, offering up interesting new twists and deviations, but preserving the overall hallmark of “everything at once, at 110% volume, and as fast as we can make it go”.

As far as the group’s newest album, A New Kind of Horror, is concerned, absolutely nothing on that front has changed. In fact, it may be the most recognizably Anaal Nathrakh disc to date, and that comes after the paint-peeling, screeching madness that was The Whole Of The Law and the bruiser that was Desideratum as the most immediate examples. On the other hand, at this point, with the band having explored so many different avenues for extremity and having cranked up every single element of their sound to the maximum (including electronics, as evidenced on Desideratum), we find A New Kind of Horror in an interesting place — because it is an album that very much pushes against the boundaries of what defines an Anaal Nathrakh disc, more so than its predecessors.

And so half the interest in the tale of A New Kind of Horror lies in just how the group have chosen to differentiate it from its predecessors, and how they’ve done that while keeping up the absolutely relentless clip that they’ve had before. 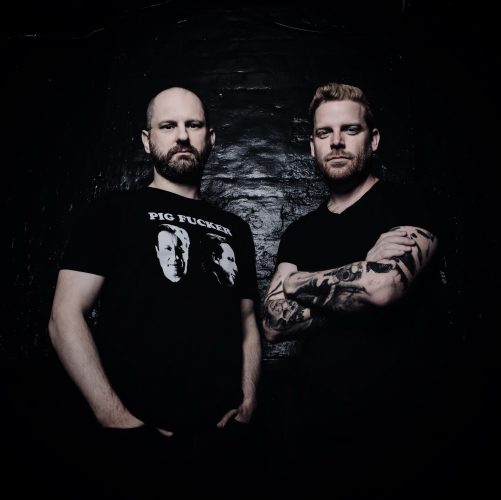 This time the Dave Hunt and Mick Kenney fueled death machine is powered forward by its clearest concept yet, in the horrors of World War One — something made immediately recognizable by song titles alone, even if you didn’t catch the numerous references in leadoff single “Forward!”, and by an absolutely demented sensibility in both vocal delivery and songwriting style, which gives the disc a feeling of having been written in a Hollywood horror movie representation of an asylum.

From the start of A New Kind of Horror you can hear the album desperately pushing against the band’s own blueprint as they find new ways to add to and mutate their high-speed take on music, with a subject matter too large to contain and highlighted broadly for its overarching atrocity and general horror. Nathrakh don’t take a fine or delicate approach to the matter; the approach matches the music, as if struck overhead by a sledgehammer. Thus, the apocalyptic themes within every Anaal Nathrakh disc are brought explicitly through to the forefront this time, and processed through a literal filter of artillery and gunfire.

A New Kind of Horror officially gets underway with “Obscene As Cancer” — which was also one of the lead-off tracks — after its minute-long intro, and it finds Anaal Nathrakh firmly within their comfort zone. Granted, “comfort zone” for this band is an auditory deluge for the average listener, but the shrill and rapid-fire vocal delivery into the slightly unhinged glory chorus as the band mount a consistently fast bombing raid in the background is a very Anaal Nathrakh style of songwriting. Partial reassurance that the band aren’t shifting that much, partial “welcome home” to listeners, “Obscene As Cancer” is a blisteringly fast and familiar style of song, especially given that the group are now ten albums deep into their career.

Things get delightfully more twisted during the following song, “The Reek Of Fear”, which hits all the approved Anaal Nathrakh checkboxes along the way to whatever fiery end the band have planned, but in addition they’ve mixed in some impressively high and lightly distorted banshee-shrieking-style vocals to punctuate specific events within the track. This includes a personal favorite moment before a massive chugging riff that the whole song builds into where the song stops abruptly and a really high scream comes soaring in from the heavens.

I like “Forward!” a lot. I will never not get a small chuckle out of the usage of gunfire samples as part of the drum beat, if only because it reminds me of the now seven-year old Rifle Burs video. I also recognize that most of “Forward!” is constructed out of what is basically a big old dumb chugging riff with a guitar tone that crunches like bone, set at near perfect mid-tempo for headbanging. “Forward!” is the -core side of Desideratum reaching full fruition, yet the song is still abrasively heavy and anthemic as well. Hearing Dave Hunt yell about missing the mundane things that existed in life prior to being brought to the frontline of trench warfare is incredible, and the utter cruelty taking place in each chorus around the lines “The guns at your back scream FORWARD” and “Who gives a fuck if your enemy is starving?!” lines up incredibly well with just how much of a bruiser the song is.

The deteriorating keyboard sample that opens the song, feeding it into the whole overarching atmosphere of a falling-apart horror show that is A New Kind of Horror, is also great. “Forward!” is one of the most straightforward, driving, least layer-upon-layer-upon-layer Anaal Nathrakh production-style songs to date. It would also feel like lying if you don’t admit that “Forward!” is also catchy as all hell. The fact that it has something of a fraternal twin in the back half of A New Kind of Horror in the form of “The Horrid Strife” is one of the  interesting aspects of the disc.

Like “Forward!”, “The Horrid Strife” sees the return of gunshot samples to a less overt and more punctuated degree, this time favoring single-shot rifle fire at the start of each chorus. It is also like its sibling in that it is one of the easiest songs to discern lyrically on A New Kind of Horror, as the song feeds more bodies into the furnace of its album concept.

It may just be a personal reading, but the descriptions of the mass death and breaking down of human beings featured in the song read like a meta-commentary on the inadequacy of language to express the imagery within. Calling the multitude of events taking place within the song a “horrid strife” seems to put forth the idea that we may not have words powerful enough to describe what was done during that time period. Maybe the Anaal Nathrakh vocal style of Dave Hunt just unintelligibly screaming for a half hour is the perfect usage of words for the subject matter, rather than just a simple shrug and “that was horrid, wasn’t it?”. It is also a bruiser of a song and highlights one of the few issues that take A New Kind of Horror down a peg, which is that this may be the first time where it becomes really apparent that the Nathrakh crew are treading over themselves a bit. 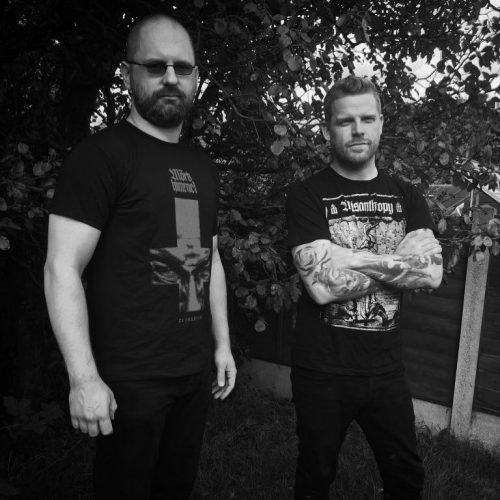 “Vi Coactus” may be the first point where a lot of longtime listeners really notice music that’s outside the general Nathrakh formula which makes up most of the album tracks. The song — which features Bleeding Through vocalist Brandan Schieppati making a guest appearance during the chorus in a war for vocal dominance in the mix — veers dangerously close to a few Desideratum songs in its intro, most notably coming off like an alternate universe take on “The One Thing Needful” for a few minutes before doing its damndest to try and establish its own identity.

For all the differing weapons that the band throw at you during that song — including a spoken segment tying into the theme of the song — it’s still colored by its opening bit. “Vi Coactus” fits well within the track listing of A New Kind of Horror, especially as a follower to the two more abrasive, overbearing, and downright destructive tracks before it in “New Bethlehem/Mass Death Futures”. with an army of choral stings to back the thudding bruising that the song is, and the suitably “soundtrack to the end of the world” stylings of “The Apocalypse Is About You!”. But it’s difficult to not constantly have the previous work running through your mind after that intro bit.

A New Kind of Horror does still have a few tricks up its sleeve to keep things interesting: One consists of most of the vocal delivery in “Mother Of Satan”. When the voice is not yelling “Satan!” over and over, it sounds like someone took a National Geographic recording of two large cats fighting and set it to music. It’s probably the most manic and frenetic A New Kind of Horror gets on the vocal front. It sounds not only like a person possessed, but the vocals are also chopped up and distorted, and it seems like they’re running backwards at times. It’s the Hall Of Mirrors applied to vocal work and we’re somewhere in the fifth or sixth layer of distorted body-figure by the point the song starts.

A second trick comes in the album’s final song, “Are We Fit For Glory Yet? (The War To End Nothing)”, which is driven forward by a large array of choral stings that make the song far more cinematic than what Anaal Nathrakh have done in the past. It’s also that the guitar riff constantly forces the song forward, darting quickly throughout the entirety of the track and making everything conform to it. It’s interesting in part because this runs opposite of a few Nathrakh releases, which seem to have solid end points but then jam in a few more songs because “fuck you, we can”. “Are We Fit For Glory Yet?” is constructed as a closing song, and fills that role so perfectly that it turns out to be one of the better tracks on the album as it ties things off in a neatly destructive and nihilistic fashion.

Like a third entry in an auditory trilogy of recent albums, A New Kind of Horror is constantly pushing against everything that it is built from, in search of ways to bend and twist the current Anaal Nathrakh formula not only to suit the album’s concept but also to give each song purpose, beyond just being another batch of Anaal Nathrakh songs. Barring some missteps as the band return to their comfort zone (which, as noted before, is still like getting hit in the head with a sledgehammer compared to most bands), the experimentation works.

Feeding Anaal Nathrakh through the horror-movie version of a funhouse and applying that concept to the destruction of World War One fuels the sneering sense of inevitably that culminates in the album’s closing song. It steers closer to the -core bludgeonings of Desidratum than it does the paint-peeling sandblasting of The Whole Of The Law, yet A New Kind of Horror still stands pretty close to those two in terms of quality. It spits the difference between them in some senses, with most of the songs present on the group’s tenth release being what you come to Anaal Nathrakh for — everything pushed up to extravagant volume and rushing with incredible speed, then fed through the “batshit” filter just for an extra measure of heaviness. The different mad-doctor experimentation that take place throughout A New Kind of Horror, however, helps to keep things dynamic beyond the band’s brand of audio pyrotechnics.

While A New Kind of Horror can’t shake all the sense of overwhelming familiarity at times, it is still a monstrous explosion of heavy metal that will blast its listeners through a wall, as the Anaal Nathrakh crew have become experts in doing.

2 Responses to “ANAAL NATHRAKH: “A NEW KIND OF HORROR””