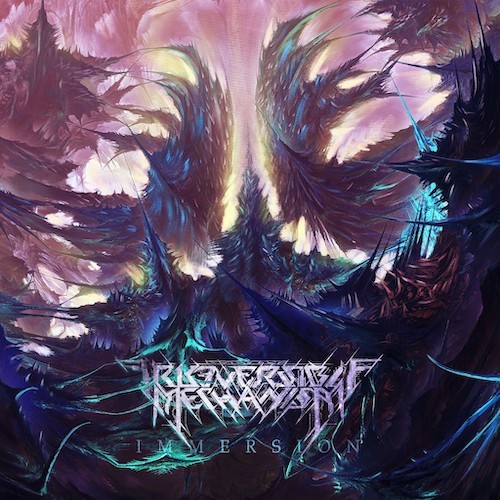 (Forging ahead with his multi-part effort to catch up on reviews of albums he has enjoyed before the year expires, DGR today reflects at length about the new album by Irreversible Mechanism, which was released in September by Blood Music.)

Speaking of building blocks and blueprints, we land here with an album where nearly every element of it can easily be traced back to its sources yet is executed so well that it might — from your writer’s standpoint — have stealthily grown on me enough to become one of my favorites of the year.

Immersion, the second album from the Belarus tech-death group Irreversible Mechanism, is starkly different from its predecessor, 2015’s Infinite Fields. It is also one whose DNA is so recognizable that it might as well be a Blade Runner-esque holographic projection high above a neon-lit city. Lying somewhere at an unholy intersection between the post-metal, recorded-in-a-hurricane leanings of Fallujah and the groove-precision of Rivers of Nihil, Immersion exists as a pretty solid example of how Irreversible Mechanism can dish out some monstrously hypnotic and dynamic records and make it seem so natural that it’s bound to spark some jealousy.

Immersion is also a record that is going be a very different experience for quite a few people who may be coming to the band hoping for the high-speed precision and everything-and-the-kitchen-sink method that they employed on Infinite Fields, because if Immersion is anything, it is certainly not that. Were it not for its near-constant all-out assault on the senses, Immersion would have a dreamlike quality to it, and at times it does manage to achieve just that. 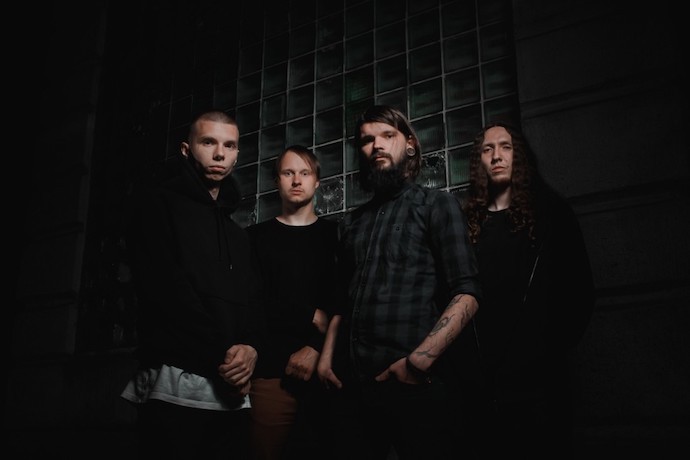 For the most part, each song segues into the next, and the first grouping of songs on the disc becomes a high-concept suite. The album’s intro track is intentionally long and relatively peaceful as the lead-in to the first main heavy song and creates a two-part, ten-minute collection of music, a very different experience not only from its predecessor but also from most of Immersion. That lead-off three-pack of “Existence I: Contemplation”, “Existence II: Collision”, and “Abolution” (for which the group filmed a music video) combine into one solid collective of music that not only eases you into Immersion quickly but also lays bare the bones of the disc as a whole.

By the time the fourth song “Simulacra” starts weaving its way across the audio-scape, the band have spelled out everything they’re going for, and the following six songs are just more of that, yet amplified in different measures. Which leads into one of the more experimental tracks on Immersion and one of the few times when Irreversible Mechanism give themselves a chance to breathe. “Simulacra”, the mostly electronics- and vocals-driven song, serves as a pretty hard mid-point between first act and second act, constantly drifting in and out of louder moments with a pulsating bass behind it.

That song’s follower,”Footprints In The Sand”, is one of Immersion’s longest songs at almost nine minutes, and a return to the hurricane sound of the first few songs on the album. It also features a nice, looooooong sample of Morpheus’ Alice In Wonderland monologue from The Matrix — the second time I’ve noticed it, since Bispora did this to me before-hand on their Phase 1 release — in order to make you feel old in case you remember The Matrix as that movie that was the permanent movie system demo in every electronics store whenever you were shopping.

For a large part, Immerison is content to drift in and out of a massive, high-speed wall of atmospheric tech-death filled to the brim with different melodic flourishes, and that’s where one of the sore points of the disc must be identified.

This really is one of those albums that is best taken as one full experience. Each individual song can stand well on its own, but Immersion really comes into its own when given the full breadth of time, to allow each song the chance to slowly fall into the next — and many of the songs do this – or for songs like “Beyond” to sound like the extension of “Footprints In The Sand” before it.

Immersion has so many dynamic moments spread throughout it that it also feels like, even late into the album, you’re constantly discovering something ‘new’ in a new song on the disc — only to discover it is likely one you’ve listened to a ton already. Since Immersion is such a massive hurricane of sound with very few calm points, you find you’re mostly separating by blocks of songs rather than by each individual track.

One segment in particular that stood out, because it was almost like buried treasure, is a melodic and rapidly tapped-out segment of guitar work in the middle of “Awakening” in the back half of the disc. It was revelatory when finally noticed, but had for so long been part of the run of songs that build the back half of Immersion that for a long time the collection of songs of which “Awakening” is a part felt like one thirteen-plus-minute, high -speed, atmospheric, and cinematic blur that left this listener in a dreamer’s reverie by the time they closed out. 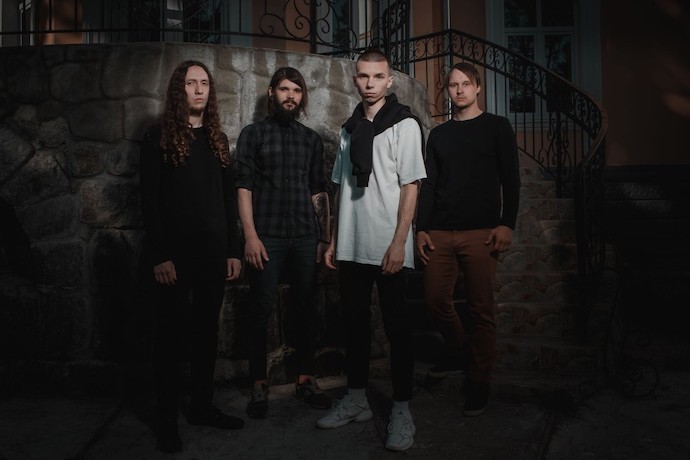 However, for all that the band do to make Immersion different from its predecessor Infinite Fields, it does share a few things in common — its love of high-speed tempo and the fact that there is a massive amount of stuff to ‘discover’ across the disc. Immersion has been out for a few months now and has been a constant play on this end, yet on multiple occasions something awesome has popped up in a song that I’d never noticed before, because I was too busy just getting thrown around by the all-out blast assault or the multiple vocal attacks. As an album of constant discovery, Immersion adds one more trick to its arsenal, along with its atmospheric tech-death approach and its multiple layered harmonies.

There are certainly some familiar aspects at play, and like a lot of albums this year, it does have some very familiar DNA strains running through it, yet it’s the way that Irreversible Mechanism make use of those, how they play within their chosen boundaries, how and when they choose to bend and break them to experiment, and how they tie it all together into one of the most densely packed albums that has been put out this year, that makes Immersion such an awesome release.

I’ll go further and say that it is probably the most ‘now’ feeling album put out this year in terms of what is happening in the tech-death scene, captured like a lightning bug in a bottle. So if you’ve got time to invest and love the recent wave of echo-filled atmosphere that seems slowly to be infiltrating the tech-death scene, then Immersion is very much an album for you.