(Here’s Vonlughlio’s review of the new album by Disphexia, which is set for release at the end of this week by Lord of the Sick Recordings.)

This time around I have the opportunity to do a review for the upcoming album of Disphexia (from Ecuador) entitled Smelly Reverse Necromacy, set to be released December 15th via Lord of the Sick Recordings.

I must admit that I was not aware of this band until The Lord signed them (yes, shame on me big time) but after that announcement I decided to check out their 2015 debut album Blast Brain Carnage, which was released by Rotten Cemetery Records. I was really impressed with that first effort and loved the straight-forward songs, which for the most part were between 1:30 and 2:29 (with a few exceptions). The music was to-the-point, with no fillers, calculated to melt your face while headbanging — my type of release. 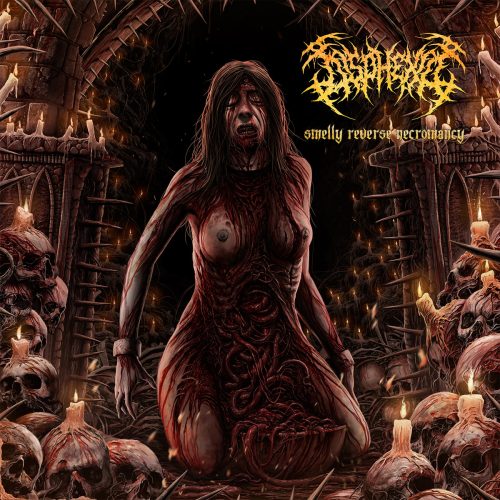 Their second album picks up where the first left off. The sound this time around is rawer and for the better, given how these songs are structured (the shortest is 1:08 and the longest is 3:00), and for me works perfectly. These guys don’t play around at all — the first song uses an intro that basically sets the morbid mood for the upcoming tracks, which all reek of disgusting BDM.

The snare drumming, which I found addictive, is one of my favorite aspects, and the tone of the guitars and bass sounds like sharp knives cutting into the songs (in a good way), with good diversity in each of the 14 chapters of this sophomore release. The only complaint that I might have concerns the brief solos in some parts that did not sit well with me. Yeah, I’m being somewhat picky, but when they crept up into the songs the sound bugged me.

Other than that, the riffs are on-point and not repetitive, and that’s a great achievement, especially because of the relatively brief length of the songs. The vocals are also a strength — very guttural, and with patterns that go hand-in-hand with the music, which is a big plus.

Overall this is a great effort and a worthy follow-up to Disphexia’s debut album, in some areas feeling like a step up and in others a continuation of the sound they had already established for this project. And now, check out a preview of some of the songs from the Lord of the Sick Bandcamp page, where you can order the album.