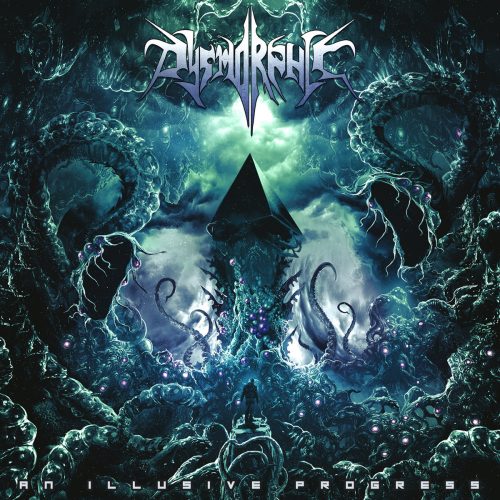 It honestly looked a little shaky for French tech-death band Dysmorphic. Some may remember way back in ye olden days of 2013 I actually reviewed the group’s first release via Unique Leader, A Notion of Causality, at this here very web site. In the five years since, the band have gone through periods of relative radio silence and some serious lineup changes, with a new drummer and guitarist, and also including the return of a vocalist who had left the band prior to that first release.

Late November would finally see the realization of all that effort, when five years after A Notion Of Causality, Dysmorphic were able to put out their sophomore followup in the form of An Illusive Progress, a more focused, vicious, and blue-and-green-hued album than their previous release and one that sees them bringing themselves very much in-line with many of their fellow tech-death compatriots with ten tracks of head-spinning tech-death…and one intro. 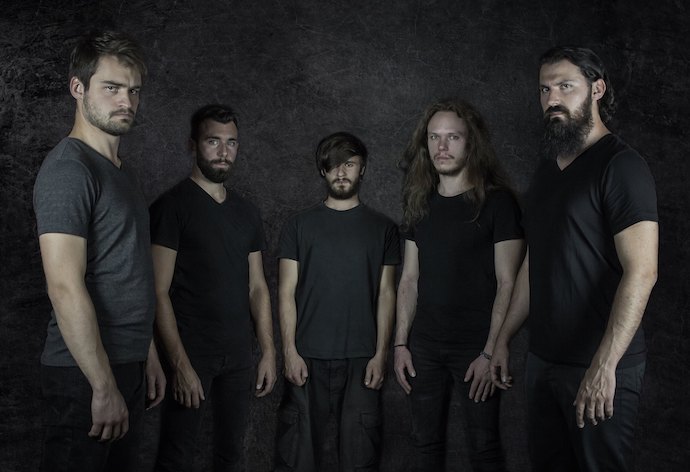 2018 — like many years before it — produced an absolute glut of releases from the tech-death sphere as every band in the genre has determined that there must be absolutely no notes left behind. While a large number have started to push, bend, and break at the genre barriers, just as many have been content to try and write the best take on genre convention that they can. Thus we’ve had wall-to-wall releases in 2018 that have included big names like Obscura, Soreption, Augury, Beyond Creation, Apophys, and Alkaloid as well as France in particular dishing up massive releases from groups like Exocrine, Gorod, and now Dysmorphic.

If one were to paint Exocrine and Gorod as two opposite ends of the spectrum, where Exocrine happily threw every single thing they could think of into every song, resulting in a hyper-violent grinding explosion, and Gorod being the ultra-precise, ultra-angular guitar-and-shred focused of the two, then Dysmorphic are happy to meet them in the middle with their own -core heavy take, which results in just as many downward focused chugging rhythms as there are headspinning solos that seem to pop up out of nowhere. Heck, it feels like only thirty some odd seconds into the album’s first legit song, “Bathos”, before you hear the familiar crawl-up-and-down-the-neck style of string bending that tech-death solos are made of being thrown forth as a lead before Dysmorphic continue the rumble and blast assault forward.

It’s easily understandable that among the opening few songs Dysmorphic settled on both “Bathos” and “The Diving Mask” to be the lead-off singles for the album, as both of those are constructed to hit the system. “The Diving Mask” especially is a ferocious song that actually lays a bit of foundation for the album, including sharing what seems like a melodic-focused twin of the album’s last song. “The Diving Mask” is chunky, heavily rhythm-focused, and one of the hard-hitting headbangers on a disc written to be mostly about head-spinning. While Dysmorphic don’t show too much restraint across An Illusive Progress, they certainly play with it a bit in “The Diving Mask”, making each minute of its five feel like it belongs there as the song slowly shifts into another tech-focused monster from its initial solo-heavy, near-deathcore opening grooves. 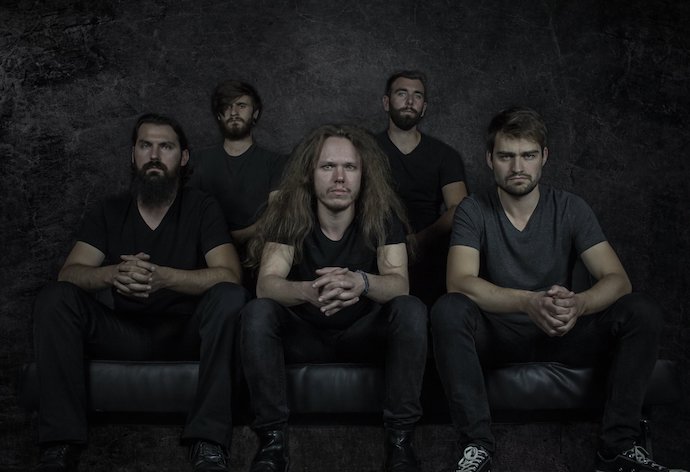 Dysmorphic constructed the album so that it cleaves itself pretty neatly in-twain thanks to haunting ambient piece “It Creeps”, with the front-half of the album feeling like a collection of singles and the back six tracks blending into each other. The album’s high point is the two-song suite of “In The Minds Of The Sculptor” and “In The Palms Of The Sculptor”, where the band give themselves over to ambition and stretch themselves over the course of eight and a half minutes. The only real mark that the songs have changed occurs when the crashing guitar-intro reasserts itself. “Minds Of The Sculptor” starts out seeming as if it will be the brain-dead chug-fest of the two, but the song moves rapidly across multiple-spectra and makes itself into a lithe beast of a track. “Palms Of The Sculptor” could be considered the more groove-focused of the two and it’s definitely the song where the bass guitar gets brought to the forefront more and more, hanging right alongside the guitar for many of the melodies interspersed throughout the song.

An Illusive Progress closes on “The Vow Of The Bees”, which initially just feels like a value-add in song form. It’s more of what the band have already dished out across ten previous songs, but damned if it doesn’t develop a sharp groove in its opening segment and then proves itself to be one of the catchier songs on the disc. Maybe it’s the constant guitar work throughout the track, but the song plays with a quickly-fired sequence of tapped-out sections and solos that soar in between the occasional angular groove. In a disc that is a little heavier and way more low-end focused than what the band have done before, “The Vow Of The Bees” feels like the band letting loose to close out the album.

It’s exciting to see Dysmorphic back in form, as the angular-nightmare that was their first album was a lot of fun and slowly wormed its way into your skull. An Illusive Progress is a bit more approachable on that front and the band have really embraced how talented their rhythm section is, but by the same token the Dysmorphic crew really saw an opportunity to let loose and keep relevant with today’s guitar-lead-happy tech-death sphere. An Illusive Progress can feel like a straight shot up the middle of the tech-death world at times, but the group take some very well-known conventions and then do their best version of that, resulting in some impressive, if familiar, headbanging music that feels like a natural progression from what they’ve done before. 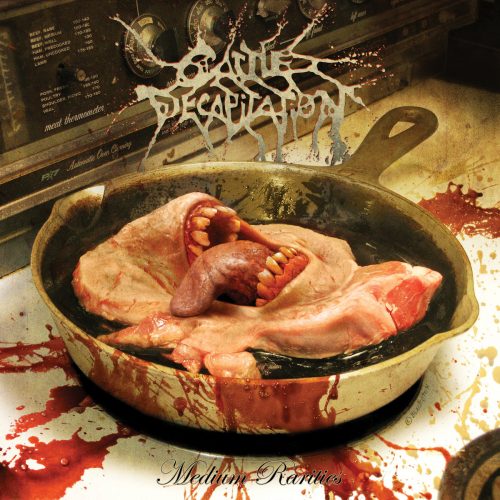 It is going to be very interesting seeing how people react to Cattle Decapitation‘s collection of rare and never-heard-before songs, considering that one could probably make a pretty safe assumption that a large chunk of the group’s fanbase are unaware of the group’s early years — not that the band haven’t always been a bubbling undercurrent in the world of death metal, but because the group’s fanbase exploded around the release of 2012’s Monolith Of Inhumanity as the group drew both critical acclaim and blew people’s minds as they unleashed a finely tuned whirlwind of just about every genre imaginable onto one CD, and then repeated the act on the following album The Anthropocene Extinction. To say that there are people who are very much looking forward to the group’s future output is an easy guess, especially now that the band count a Cryptopsy (and Neuraxis!) bassist among their ranks.

It’s imaginable that for some people the group’s discography started at The Harvest Floor (or way after all of that, like myself, since I was never one of the underground cool kids) and went on from there, so they may not know of the group’s early history when they were a brutally heavy deathgrind band with shorter song lengths and disgusting production to match. This is why half the fun of Medium Rarities may be watching how people react to it; the band they are familiar with nowadays only really comes into shape in the last six songs, and before that you have a combination of serious exhumations on the band’s part and tracks from various splits done in the their early years, which are bound to make completionists very happy. 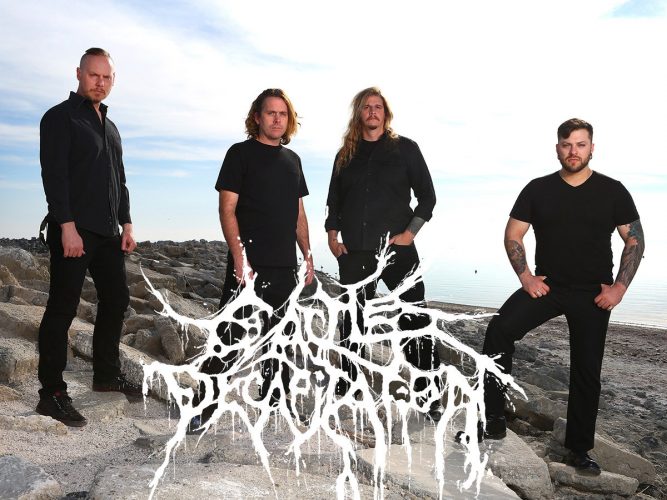 The pacing of Cattle Decapitation’s Medium Rarities collection is strange. Its starting point basically flings listeners back and forth across the early years of the group’s discography in a way that leaves the earliest songs in the middle of the collection. It starts with songs that were part of the group’s split with Caninus and from there actually travels backwards in time to include bonus tracks on early discs and some demos from when the band were almost embryonic in form. From there things begin to progress chronologically again, but it is fun for that initial yanking around to begin with some heavy split material, move to some early, rough-form demo work, and then work back to bonus tracks from Cattle Decapitation‘s discs and unreleased songs from around those eras.

The musical exhumation is a large part of the fun with Medium Rarities. It really does feel like you’re snooping around in the crypts of a band with some of that early stuff. Medium Rarities sports a large tracklisting but it only serves to highlight the fact that the early era of Cattle Decapitation was very deathgrind-focused; many of the songs were a minute and a half to two minutes long and just sound like people annihilating their instruments while vocalist Travis Ryan experiments with roaring, snarling, and discharging as many inhuman sounds as he can muster just to murk up the whole event.

The fourteen seconds of “Thrombosis All-In” has that classic “recorded in the next room over” sound everyone loves from early demos; the part where it’s just fourteen seconds of yelling only adds to that atmosphere of the band destroying their instruments. The previously unreleased “You People” doesn’t even have a band in it. It just sounds like they accidentally recorded a possession and exorcism over the course of two minutes and created an ambient sound piece out of it. Of course by this point, Medium Rarities is moving chronologically, so after that you start getting into the band’s more recent work and shift from full-on disgusting grind tantrums to the current all-extreme-genres, whatever-style-strikes us death metal that the band are now. 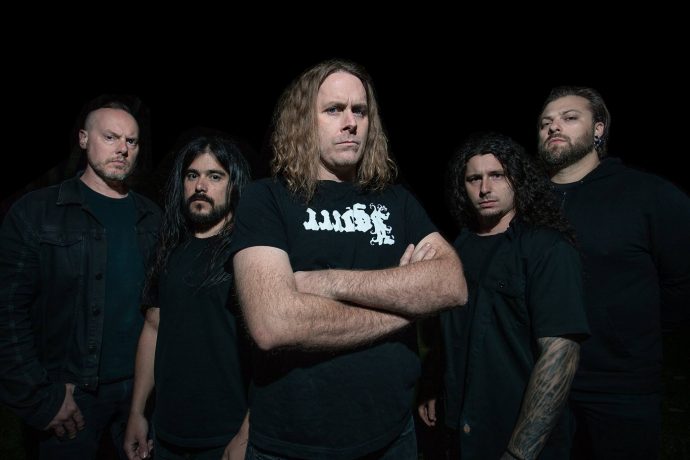 What value you’ll find in Medium Rarities ultimately comes from how you approach this collection, odd pacing and all. Since it has its tentacles stretched in three different directions, it really does depend on what you’re looking for. If you’re a completionist then the Cattle Decapitation crew have done you a massive favor, archiving a whole truckload of rare/unreleased songs, including covers (the cover of “Burnt To A Crisp” from Carcass‘ Reek Of Putrefaction disc is part unrecognizable, part played shockingly straight), early demos, and hard-to-find split material collected in one release. If you love a good historical dig then the early demos and songs from the early ¡Decapitacion! single are fascinating, especially as you can hear the early roots of the group’s material already starting to take place — albeit in a very ugly, sewer-dredging, intestine-gurgling form.

If you’re one of those where the band’s discography basically starts with their later material, then Medium Rarities is going to be a very odd roller-coaster ride for you until the back few songs, where you start getting into unreleased songs, bonus tracks for Japanese editions, and the one track the band put out as a Decibel Flexi-Disc around the time Anthropocene Extinction came out — which is thrilling to finally have, by the way. A lot of dedication went into Medium Rarities, though, as it’s evident from the tracklisting that the group were willing to dig deep for songs to put on this release. It’s a treasure trove of monstrous vocals and ugly, ugly guitar work from a group whom you wouldn’t have expected to keep such a well-archived history, given that their music has a habit of scorching the ground clean every time it hits.

While it does feel like a snapshot of Cattle Decapitation in three distinct phases and then placed throughout the tracklisting in medias res, Medium Rarities still makes for an interesting listen and has a ton of value for those looking to complete their Cattle Decap collection.