When last we checked in with Norway’s Beaten To Death the year was 2015 and the band were on the brink of releasing their third album, Unplugged, which our reviewer Austin Weber called “the rarest kind of grind release” — “a record that’s memorable from start to finish”, with unusual vocals and melodic components that floated above the thrashing chaos and groovesome chugs in a way that made the music unusually atmospheric and gave it staying power.

Now these Oslo-based grind innovators are returning to the field of beatings with a new album named Agronomicon, which will be digitally released by Mas-Kina Recordings on Christmas Eve and on CD and LP come January 4th. The band have begun releasing something new on a daily basis leading up to the release, and today we bring you the latest offering, a track called “Havregubbens Dolk“. 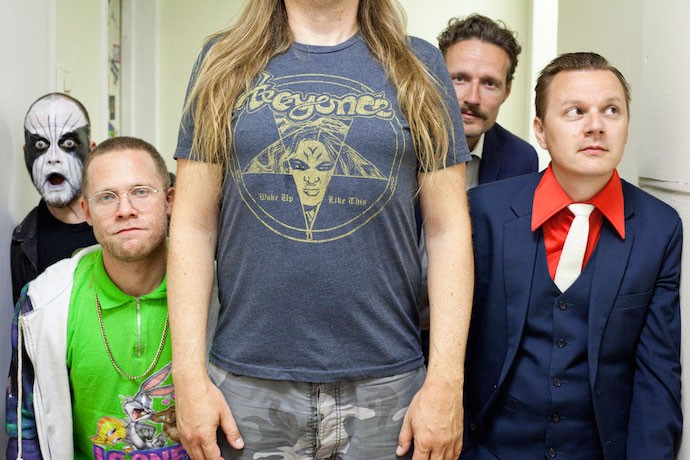 As usual, BTD recorded the new album live, without resorting to overdubs or any other studio trickery. All the trickery is in their minds. And so “Havregubbens Dolk” greets the ears with furious battering percussion, screeching riffs, and a mix of increasingly scalding shrieks and horrid deathly roars, punctuated by cold, jabbing chords and bruising, hammering bass notes. But there’s a contrasting, moody arpeggio in the song, and wisps of sorrowing melody. There’s something yearning and wistful in these sounds, a strain of tragedy that seeps through the delirium.

William Hay created the cover art for the new album, and it features typography crafted by Kristian Krogh-Sørensen. You’ll find other examples of Beaten To Death‘s most recent contortions of grindcore convention at the Bandcamp page linked below, where you can also pre-order the album. Enjoy!