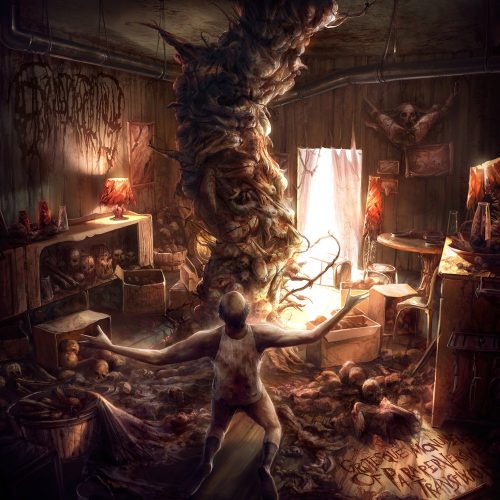 (We present Vonlughlio’s review of the new album by the Czech band Epicardiectomy, which will be released on the 30th of December by New Standard Elite.)

The following review is for Epicardiectomy’s third opus, Grotesque Monument of Paraperversive Transfixion, to be released December 30th via New Standard Elite.

This band was formed back in 2007 in the Czech Republic and their type of BDM/Slam has a huge fan base around the globe. Personally, I tend to be picky when it comes to bands that are in this sub-genre. When I first encountered them early in their career, I hated them with a vengeance, and talked ill things about their name. Now, you might wonder why, and might also wonder what brought about the change of mind? Well, to be honest, it’s because of “The Serge“, their guitar player, who used to play in a band called Fleshbomb.

I remember admitting to myself, “I’ve only heard two songs that I did not like, and this new guitarist used to play in this other band, so let’s give this a chance”. So I proceeded to the Coyote Records Bancamp to listen to their first and second albums with an open mind, and guess what? This fucker bought the two albums right there — and the songs I hated? Well that reaction has not changed. From this experience, I’ve learned that sometimes giving a second chance works, and this time it did, and I don’t give two shits what anyone else might think. 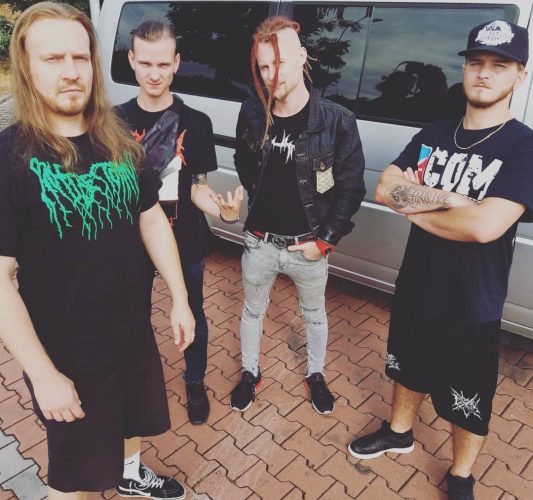 The first album, Abhorrent Stench of Posthumous Gastrorectal Desecration, and their sophomore release, Putreseminal Morphodysplastic Virulency, showcase their musicianship and creativeness in this genre. I prefer their debut, since it gives an edge over the second album in terms of variety.

Some of you readers might remember that New Standard Elite is one of my favorite BDM labels, which I have been following since 2012. I’ve been able to witness how it has grown in the past years to become a truly amazing vehicle for brutal sounds. When the news of arrived that they had picked up this band, I’d venture to say it was a move no one expected. Thus, it divided the label’s followers big-time, to the point of some just giving up on NSE, but others like me simply didn’t care and continued to support the label.

Then came the announcement of the third release, with the cover art and a song featuring their new vocalist Ondrej (he has been with the band since 2015), and when I heard that snare and the rest of the overall sound: HOLY FUCKING SHIT. I fell in love with the band all over again. So imagine when out of the blue this Dominican got the chance to write about the album — ohhh boy, I wouldn’t have passed this up for anyhing!!!!!

I had to sit in my dungeon with the lights dimmed low to set up the mood before pressing play. Once the intro sets in and that spoken word gives you with no misdirection about what you going to listen to, and then the second song hits, you are going for a path of changing riffs, blast beats to enhance the richness of the song structures, and vocals that sound the best of all their releases.

This is what some might call Slam Poetry, and might add a bow to the diversity of the sections in each song. As an entity they have grown together and have achieved great success in the song-writing, knowing their fortes and weaknesses.

The Serge is a tremendous guitar player, and maybe at times his own most severe critic, pushing himself harder and harder and thus for me creating riffs that are memorable, and just a lot of fun to listen to. The drums and the bass feed each other, and the production in this effort enhances the contribution of these instruments even more, giving them more room to breath.

One of my favorite aspects besides the guitar work are those vocals — wow, I just love them and believe they are perfect for the music. The frontman’s voice has power, and it shows in this album. There’s so much driving force, and if you have the chance to see a live video of this band, you will understand what I am saying.

I thought I would like the album for sure, but ended up loving it. In my humble opinion it is their best work, and the future for this project is high and bright. I’ll be here to witness that.