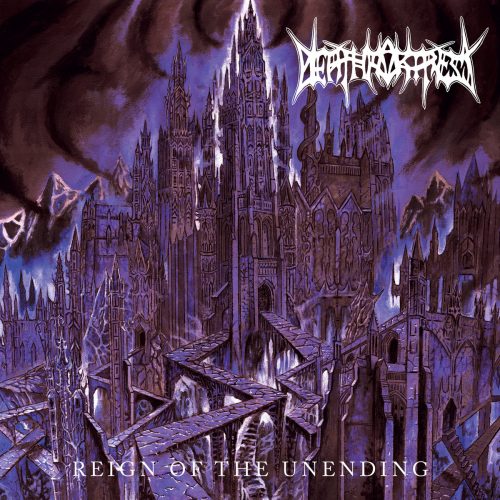 (Fallen Empire Records chose this day for the label’s final batch of releases, one of which is the hotly anticipated new album by New Jersey’s Death Fortress — and to coincide with its release we present Andy Synn‘s review.)

One of the things I love most about Metal – about listening to it, creating it, writing about it – is how unpredictable it can be. Every year is different, and you can’t necessarily guess in advance what albums are going to raise the bar, and what artists are going to shit the bed (sometimes spectacularly) over the course of the next twelve months.

But some artists are definitely more reliable than others, which is why I’ve been eagerly anticipating the release of the new album by New Jersey Black Metal marauders Death Fortress ever since it was announced.

Perhaps due to coincidence, or perhaps due to kismet, I’ve actually written about and reviewed every one of the band’s albums to date, beginning with my chance discovery of their debut, Among the Ranks of the Unconquerable in 2014, and then following this with some similarly comprehensive coverage for Deathless March of the Unyielding and Triumph of the Undying.

And while …Unconquerable still remains my personal favourite (although there’s not much in it, truth be told), on first listen I have to say that Reign of the Unending may very well stand a good chance of seizing that title for itself.

It’s not so much that Death Fortress have changed their style very much (if at all) here. The ravenous riffs and throat-ripping vocals of songs like “Glory to Tyrants” and “Reign of the Unending” still owe a fair, and tacitly acknowledged, debt to the band’s exalted progenitors in Hate Forest, Aeternus, and Gorgoroth, while the grim and grandiose melodies of “Monolith Winter” and (in particular) titanic closer “Wrath of God” all pay tribute to the unimpeachable legacies of Immortal and Dark Funeral in their own inimitable (or imitable) way.

But the sound of this album is undoubtedly a marked improvement over its predecessor, maintaining the raw, primal energy of the band’s previous works while also embracing a newfound clarity that allows every element – particularly the drums – the necessary room to breathe and the space to be heard, as well as the requisite power to punch through on even the most modest of speaker setups.

Nowhere is this more apparent than during the stand-out second half of “Nearer to Purity”, where the band fully embrace their penchant for moody, melancholy melody, employing a scintillating blend of sombre dissonance and simmering bass lines, all underpinned by some utterly captivating percussion which serves to further highlight just how important and impactful the drum work on this album really is.

I don’t think I’m speaking out of turn to say that all of us have those bands who simply speak to us, and connect with us, for reasons which we can’t necessarily put into words. And, for me, Death Fortress are just one of those bands. As while their particular brand of blisteringly bleak, abrasively atmospheric, death-tinged Black Metal isn’t reinventing the wheel, the vehemence and visceral power with which they execute each and every song puts them firmly among the ranks of the very best in the business.

Reign of the Unending is available right now from Bandcamp, while the LP can be ordered from Fallen Empire Records here.

4 Responses to “DEATH FORTRESS: “REIGN OF THE UNENDING””