Speaking of year-end lists, it was Andy Synn‘s 2018 “Personal Top 10” list that finally made me pay close attention to Antler’s second album, beneath.below.behold. Stupid of me to wait so long, since Mr. Synn had reviewed the album eight months earlier and pronounced it “one of the most pleasant surprises of the year so far”. But this is definitely one of those better-late-than-never situations. 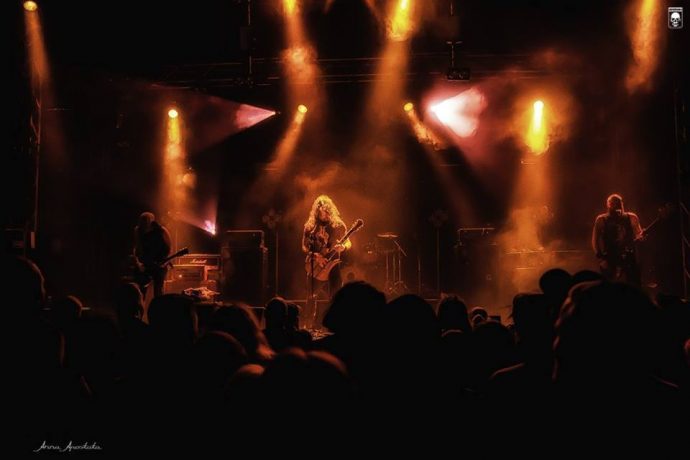 I’ll add my own late endorsement to Andy’s: This really is a fantastic album, and one that’s so tremendous in so many ways that the mere mention of it ignites a fire in the memory. “Metemspsychosis” is the song I’ve chosen from among several that I seriously considered from beneath.below.behold.

Unlike some songs on the album, it doesn’t blaze away right from the beginning. There’s a bit of a slow build, which includes a swirling little melodic motif. And even after that, it doesn’t immediately scorch your eyebrows, but instead hits a hammering rhythm that gets your head going hard, with a glorious riff and the gritty, growling vocals that helps give the band’s music such visceral impact.

Everything that then ensues, from the next pulsating riff to the next swarming one, from the torrent of percussive blasting to the well-placed, dramatic clean vocals, from the stately gloominess in the music to the grandeur in it, just carves the mark of this emotional powerhouse of a song ever deeper into the mind. And it does eventually burn. 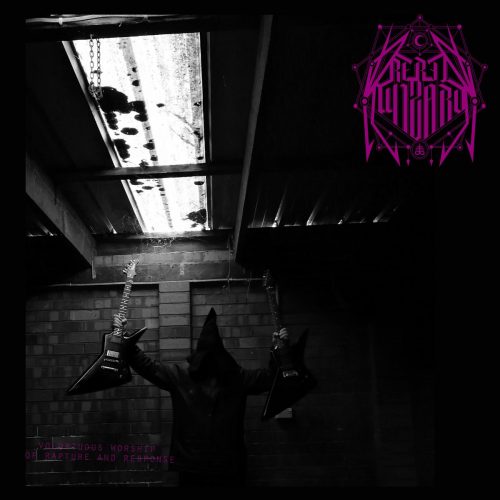 I think anyone who has visited this site more than once a month would know that a song from Rebel Wizard would be on this list.

I’ve spilled a borderline-absurd number of enthusiastic words over the music of this Australian project since first discovering it years ago. I hit a new annual high in word-count last year, generating both voluminous immediate reactions to every song on Rebel Wizard‘s latest album, Voluptuous Worship of Rapture and Response, and participating in a novella-length interview with the Rebel Wizard himself.

I loved the album, as I have everything this Australian musician (who is also the man behind Nekrasov) has created under that name. His one-of-a-kind musical creations, which one Bandcamp commenter cleverly characterized as music “from an alternate universe where black metal was invented by NWOBHM stalwarts in the 1970s”, is a glorious and abrasive and cathartic revelry, an experience that’s even more attractive because the creator genuinely seemed to have no hope or expectation that anyone would like it; it was simply a very personal expression, something that he needed to do for himself.

If you spend time with this latest album, you’ll find highly infectious qualities in every song — and probably other qualities that some people will experience like a slap in the face. But of all of them, it’s the song that we premiered last year which I’ve chosen for this list. Perhaps the song’s title had something to do with the choice, but I think the music alone finally won out — though it wasn’t a hands-down choice. As I wrote along with that premiere:

I go back and forth between which song on the album is my own favorite. At least half the time, this is the one. Probably it’s because of the beautifully mystical guitar picking (mixed with a foreshadowing squall and whine, and a burst of blizzard-like fretwork) which begins the song. Drawn in by those opening layered reverberations, you don’t realize that a grenade has already been tossed at your feet with the pin pulled, the seconds ticking down as you’re becoming beguiled by the opening.

And then the grenade goes off… and off you go into the sky, all the bits and pieces of you scattered in the blast, what’s left of your face grinning widely. It’s such a wild, blazing rush of electrifying riffs, magical soloing, and physically compulsive rhythms, combined with the merciless assault of cathartic vocal extremity.

Here’s “Drunk On the Wizdom of Unicorn Semen“:

Unlike the first song in today’s installment, I became attracted to this last one much earlier, but it was still my friend Andy who did the most writing about the album (Drowned) that included it, both reviewing the album and then (like the first one excerpted in today’s installment) including it in his Personal Top 10 List for the year. And so, I’ll again introduce the song I’ve chosen with an excerpt from his writing:

The original touch-points I highlighted in my previous coverage of the band – Triptykon, Meshuggah, Gorguts – are all still relevant throughout the length and breadth of this record, with the music continuing to express a unique blend of angular, gut-churning riffage and ominous, oppressive atmosphere…. But this time around the levels of aggression and unsettling discordance seem to have been ramped up a couple of notches, granting these songs a sense of pummelling, punishing heaviness and calculated, barely-controlled chaos reminiscent of Ulcerate at their most apocalyptic, making Drowned one incredibly intense, not to mention incredibly dense, listening experience for pretty much its entire run-time.

There are, however, a few carefully chosen moments where the quartet allow the almost asphyxiating atmosphere they generate to open up and breathe a little, exposing a calmer and more ambient side of the band than we’ve seen before, which stands in stark, dynamic contrast to the rest of the album’s practically overwhelming aura of soul-crushing intensity.

As Andy wrote in that same review, the song we premiered from this fantastic album by Barús encapsulated all of these ingredients, and it has remained a very memorable one for me. The song I’ve chosen is “Dissever“: