Here are six songs and videos that stood out from the pack in my seeing-and-hearing session last night and this morning. Some other items also stood out, and perhaps I’ll get to those tomorrow (perhaps along with other things I’ll find today). Everything below is new, except for the second song and video, which is newly discovered.

This first video is actually a last-minute addition. I had this round-up nearly ready to go when I noticed a message from my comrade DGR that read as follows: “New Devin Townsend video out in the wild. Does a good job highlighting how batshit the songwriting is. Still has its ‘Space Enya’ moments”. 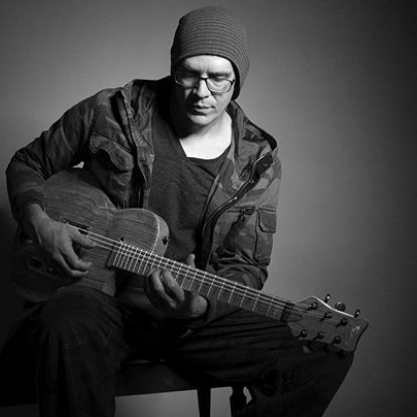 After a quick search I found the following video for “Genesis“, which is the first song Mr. Townsend selected as a preview of his new album Empath, the overarching theme of which is “‘hope’ in chaotic times”. As he further explains: “It’s the first time in quite a few years I have made an album like this, and I think if nothing else, ‘Genesis’ represents the chaotic nature of the project (and the world at large currently) in the most accurate way I can do at this stage of life”.

And I think as a final prelude to the music itself I’ll just leave this further quote from DT‘s Facebook page:

As the musical nature of Empath shifts from track to track, (from musical theater, death metal, prog free jazz and more commercial things) it was a hard decision. Some people wanted the relatively straightforward song ‘Spirits Will Collide’ while others wanted a more cinematic banging track like ‘Evermore’. We ultimately chose to go with the opening track ‘Genesis’ as it not only features around 5 different stylistic shifts (some quite jarring, to be fair 🙂 but also includes all three drummers, the choir, the orchestra, and basically the kitchen sink as well. 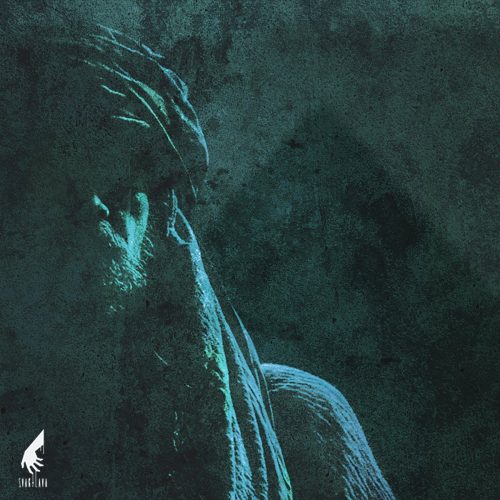 I do believe this is a first — the first mention of Bong-Ra at our site. It’s a long-overdue occurrence, though I’ll admit that in the past I’ve barely skated over the surface of this Dutch project’s creations. Even today, I’m only barely touching the surface, just one song from Bong-Ra‘s latest album, Antediluvian, is all I’ve heard from that record, and discovered it only because a link to video for the song appeared in an announcement yesterday that Tartarus Records will be releasing it on cassette tape.

Antediluvian was released by Svart Lava last October. The album is the creation of Jason Köhnen (bass / electronics) and Balazs Pandi (drums). The video is for the album’s opening track, “Kheper (Pharoah’s Serpent)“. Ethereally beautiful and spooky at first, it becomes crushing and grandiloquent, doom monolith of low frequencies whose immensity rivals that of the pyramids in the video, while still as haunting and ephemeral as the visions of clouds passing over them. The increasingly extravagant drumming in this chilling song is another highlight. 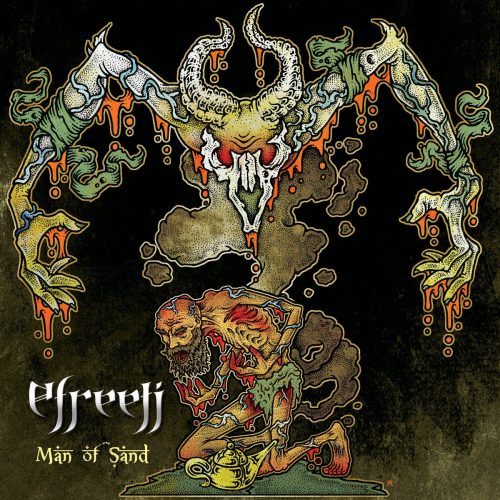 There are some parallels between the Norwegian band Efreeti and Bong-Ra: Currently, it’s largely the work of a single creator — Kristian (“Creep”) Wangberg — with frequent help from drummer Eetu Pesu and bassist Krisztian Kovac; this is the first mention of Efreeti at our site; and the new song also creates a haunting atmosphere.

What you’ll find below is a video for a song called “Its Inner Pain” off Efreeti‘s new album Man of Sand, which will be released on March 8th. The music is a form of melodic black/death that’s doom-laden and heavy, but also possessed of an ominous grandeur. It channels a feeling of building tension and looming threat, thanks in part to the harshness of the vocals. About three minutes in, the music grows even more sinister and aggressive (and you should prepare to get your head moving too). It’s a mesmerizing but very perilous experience — and those same qualities come through in the video. 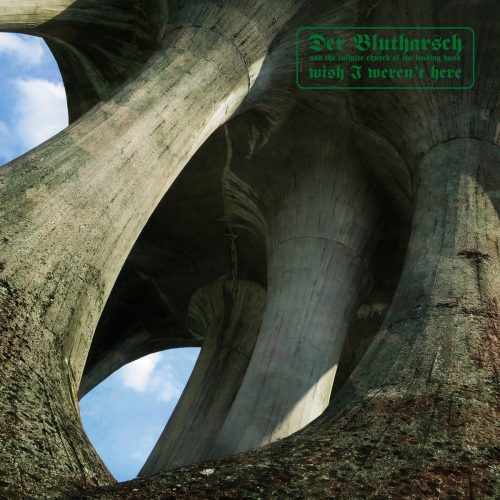 DER BLUTHARSCH AND THE INFINITE CHURCH OF THE LEADING HAND

The next song seemed to me to suit the flow of sounds that began with the last two tracks in today’s collection (though I’m going to rudely break that flow with the next two songs). This one, which also comes with a video, is “O Lord“, by Der Blutharsch and the Infinite Church of the Leading Hand, a band I first discovered thanks to their appearance on the 2016 year-end list for NCS by Semjaza (Thy Darkened Shade).

“O Lord” is the closing track on an album entitled Wish I Weren’t Here, which will be released on March 10th. It’s a heaving and lurching menace, with wailing, psychedelic vocals that are very good (and very spooky), and the woozy guitar leads seem to have psychoactive properties too, and they mount in intensity, just as the song overall becomes more harrowing and heavy.

The album’s title track is up for streaming on Bandcamp, and I’ll furnish that stream along with the video for “O Lord”. 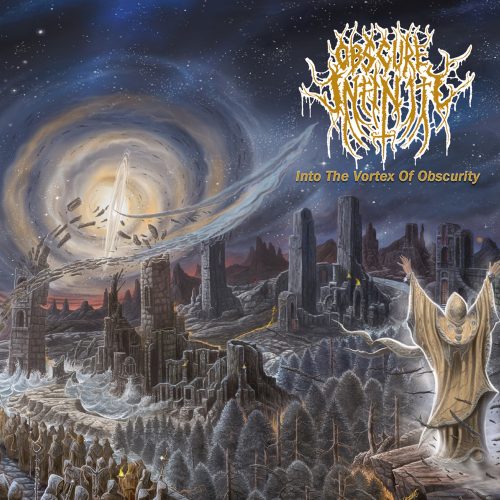 As forecast a few paragraphs ago, I decided to break the flow of the music that I thought the first three songs in this collection set up (at least in my head), and turn to some more extreme and violent sounds for the last two tracks in this round-up. The first of these is “Cosmic Disgrace“, the second “single” off a new album named Into the Vortex of Obscurity by the German death metal band Obscure Infinity.

Before getting to the song, I’d like to show you the full-scale cover art for the album by the terrifically talented Spanish artist Juanjo Castellano: 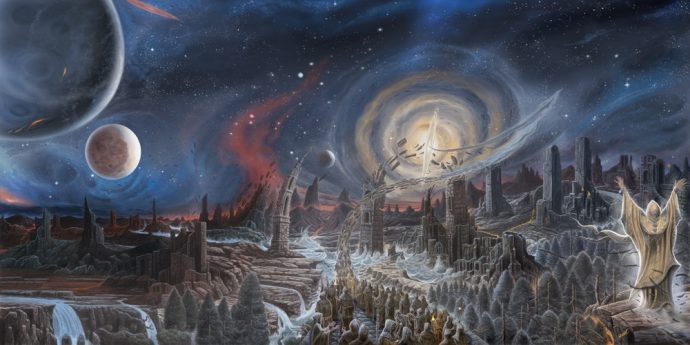 “Cosmic Disgrace” is a rushing beast of cruel tremolo riffing, clattering percussion, blaring infernal melodies, and savage growls — until it becomes a crawling horror. That disease-ridden slower movement doesn’t last long, because the band soon mount an even more destructive (and highly headbang-able) attack. But there are still more dimensions to this song, including another slower segment laced with an exotic melody and an even more exotic and alluring solo — and a pair of more frenetic solos surface when the pace ramps up again and the music becomes magisterial as well as barbarous.

It really is a wonderfully multi-faceted and dynamic song, and one that will get your blood pumping and your head pounding.

Into the Vortex of Obscurity will be released by FDA Records on March 22nd. 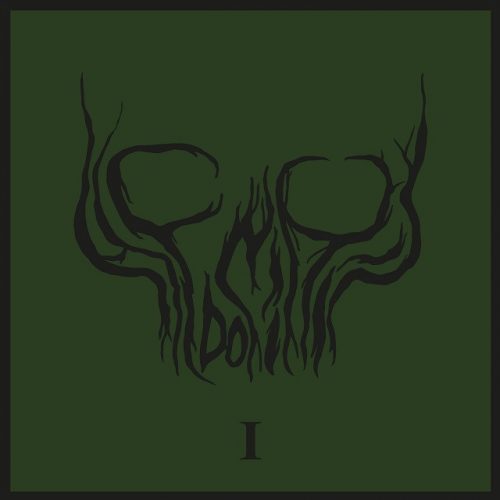 The music of Hedonihil seized my attention because the band consists of three members of Swallow the Sun — Juuso Raatikainen, Mikko Kotamäki, and Juho Räihä. Why, you might wonder, did they decide to form a musical vehicle different from Swallow the Sun? Let’s allow them to speak for themselves:

“Hedonihil‘s purpose is to be a direct sonic assault towards existence, no remorse. Take it or leave it, negative vibes only.”

Their debut album, I, will be released by Inverse Records on April 12th, and the first single surfaced yesterday — a song called “The Hedonist Anthem“. After a brief occult-toned intro, the music becomes a wild, lashing and whirling assault, with shrieking vocals that match the bonfire-like quality of the instrumentation. The band also demonstrate a capacity to do more than flood the senses with percussive strafing runs and berserker riffing, interweaving moody melody and a feeling of extravagant demonic majesty before the song ends.

It seems that this trio have found a good new use for their veteran talents. This song alone is reason to keep an eye out for the new Hedonihil album.