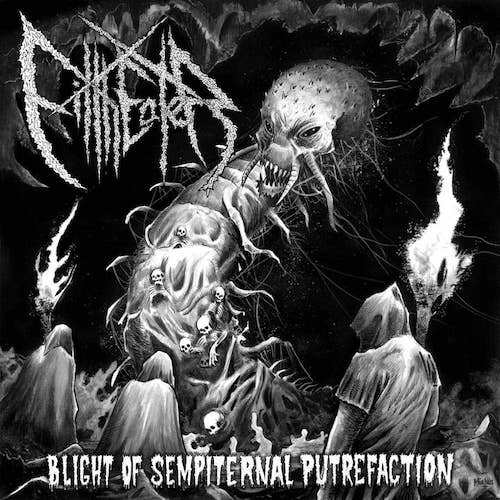 So much filth. Drowning in it, every orifice clogged with it. What does it say about us, we consumers of extreme metal, that so many of us hunger for aural noxiousness like dogs drawn to the taste of their own excrement? Hold that thought…

Filtheater, in all the most immediately obvious ways, pander to those listeners who hunger for foul and frightening experiences. Their name, of course, but beyond that the title of their new album — Blight of Sempiternal Putrefaction — and such song names as “Malevolent Transcendence”, “Amorphous Bulging Appendages”, and the track we’re premiering today, “A Veiled Loathing Throne“.

But if you ponder those titles, and others such as “Monologues of Reverence”, “Vapors of Human Sacrifice”, and “Unwelcome Illuminated Curiosity”, not to mention the cover art,  you’ll find clues to other dimensions of Filtheater’s brand of death metal, which proves to be eldritch as well as toxic.

In the case of “A Veiled Loathing Throne“, the band have created an experience that’s chaotic and crushing, maniacal and murderous, and thoroughly paranormal in its atmosphere. And yes, it’s as dense and disgusting as a blocked sewer main.

The song spins us into an electrifying vortex of ravaging sound. The sharp, manic crack of the snare, which switches patterns with abandon, stands out in the midst of the murky roiling tone of the guitars and the thunderous tumult of the bass. The riffs whip and strike, seethe and boil, dart and demolish. The music varies from head-moving to nausea-inducing, from escapades of feverish, berserker ravaging to cascades of poisonous gloom. All the while, the vocals are an abyssal, monstrous roar.

Primitive and disgusting the song may be, but it hits with primal force and creates a skin-shivering atmosphere at the same time, and so there is fascination in this filth, and an adrenaline-triggering effect that accounts for much of its appeal.

Blight of Sempiternal Putrefaction will be released on April 22nd by Memento Mori. It is this Mississippi band’s first full-length, and the first release in which former sole creator K.J. has been joined by other musicians (C.E., R.S., and A.W.). The cover art was created by Mörtuus, and the record was mastered by the masterful Dan Lowndes.

Memento Mori highly recommends Filtheater for fans of Incantation, Phlegm, Grave, Entety, Rottrevore, Baphomet, Autopsy, Nuclear Death, Embalmer, Goreaphobia, and Corpus Rottus. To give you more than a single nasty taste of what Filtheater have done, we’re including streams of two previously released tracks in addition to today’s premiere.