Jumping on the festival bus was easy enough for out-of-towners – the route number changed from its usual operating of “9A” to “666.” The quick ride to the harbor from the city center was full of death growls, beer, and very loud Danes. It was almost enough to make me pity the bus drivers in charge of this route, but they were dealing with the ruckus amazingly well. In fact, negativity just didn’t seem to be a thing in Denmark. You could really say everyone here was… hell-bent…on having a good time. (I also can’t promise that’ll be the last of my “hell” puns through the duration of this. No, I’m not even a little bit sorry.) 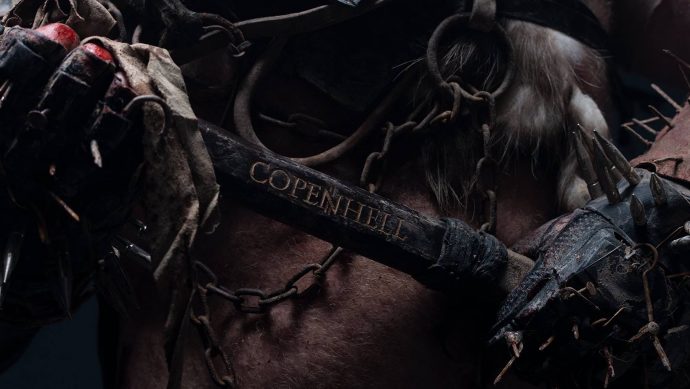 Arriving at the gates of the festival was an experience by itself. The entrance was adorned with an upside-down cross and the festival’s Spotify playlist blaring from speakers atop it. Beyond the gates was Udgard, a side area named after a land in Norse mythology where giants walked the earth. At Copenhell, their version of Udgard lacked any mythical giants, but plenty of large humans covered in armor, getting war paint applied for the day’s festivities, and drinking their libation of choice. It was a fucking top-notch spot to buy locally crafted Norse jewelry, armbands, bracelets, drinking horns, flagons, and a laundry list of other stuff. There were also fire pits and long tables, capped off with a beer tent serving some kickass local beers. (Turns out, Danes love their microbrews as much as we do in the Pacific Northwest.) Figuring that it was already noon and therefore way past the time to start drinking, we grabbed our first beers and headed towards the festival grounds.

I audibly gasped as I walked into the main festival area. This place looked like if Disneyland and Burning Man had a baby that was delivered by Satan on the set of Mad Max: Fury Road. Bedazzled skulls hung from archways. Metal-themed restaurants were everywhere – “Master of Porkets,” “Grill ‘Em All,” “Flying Pancakes from Hell,” and others. To our left was the Pandemonium stage, the smallest of the three Copenhell stages, where local all-female death/doom growlers Konvent were just about to kick things off.

About two songs into their set, one thing was clear: These ladies came to destroy, early set time be damned. Dense, murky riffs seemed to be physically plastered to swamp-creature growls from vocalist Rikke Emilie List. Their pounding rhythm section was heavy enough to shake loose the burrito I’d just inhaled. By the time their 35-minute set was up, the local Danes had laid the groundwork for an earth-shaking day at Copenhell. 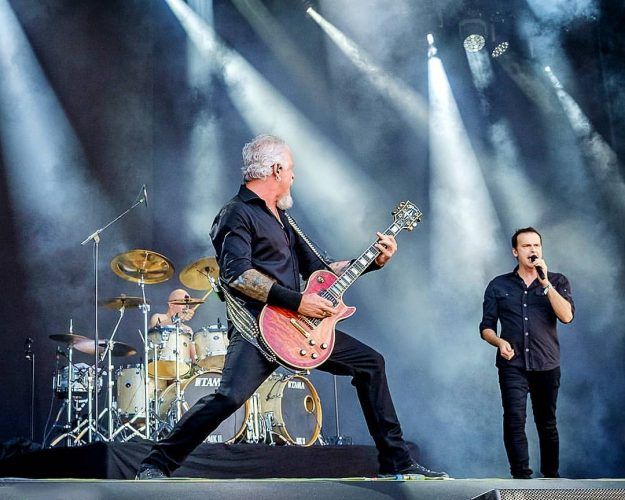 photo by Almost A Real Photographer

We swung around the festival’s back end in time to see the mighty Demons & Wizards take the Hades stage. I squinted for a second when guitarist John Schaffer came out, because the last time I saw him on stage with Iced Earth, he didn’t have gray hair. Given that he’s been writing some of the sweetest leads and riffs in modern metal today and I’ve just been blabbing about it on various corners of the internet, I thought that said more about me than it did him. The band wasted no time ripping into “Heaven Denies” and “Poor Man’s Crusade,” but then followed it up with a cover of “Burning Times” by Iced Earth and a rousing version of Blind Guardian’s “Welcome to Dying.” Vocalist Hansi Kursch still hasn’t lost a step, and though I’ve never seen Blind Guardian live, the combined intensity of his sky-piercing siren wails and Schaffer’s buzzsaw guitar made for a memorable set.

Stone Temple Pilots would be the first of the day’s lineup to play the biggest stage of the festival, Helvete. I was refilling my beer with just enough time to hear the unmistakable opening riffs of “Wicked Garden,” and instantly I was a 15-year-old kid again. New vocalist Jeff Gutt was hard at work bellowing his way into channeling the late Scott Weiland to a lukewarm crowd reaction. Something told me STP had never made as big of a splash in Europe as they did in the US. Or maybe it was the early set time and the distinct lack of death growls or blast beats that come with alternative rock? Whatever it was, something felt off. The band did manage to salvage an overall not-bad set with an enchanting (and mostly acoustic) version of “Plush” and the grunge-era standout “Dead & Bloated.”

Back at the Pandemonium stage, something weird was about to happen, and I didn’t yet know it: Skindred was about to turn me into a fan of their music.

For the record, there was a point in time where I would’ve blasted their off-kilter blend of reggae, punk, metal, and hardcore from the highest of rooftops, but that time was also when people took Limp Bizkit seriously. From the moment the Welsh “raggapunk” band started the opening notes of their set, with vocalist Benji Webbe’s amusing crowd interactions being an unexpected highlight, I found their music to be an easy place to get lost in. Their positive energy was infectious, and their razor-sharp set was an effortlessly cool way to spend 30 minutes. Copenhell was already surprising the mortal shit out of me.

I hustled off back to the Hades stage in a hurry. There was simply no way I was going to miss a single note of Refused. Anti-capitalist punk from pissed-off Swedes who have a sense of humor about it? Oddly specific, yes, but there’s no other way to categorize what Refused does. All we know is they’re really fucking good at it.

Never a band to shy away from delivering their own brand of angular, frenetic punk rock, Refused wasted no time in creating the first mosh pit of the day with “Rather Be Dead” and “Elektra.” Vocalist Dennis Lyxzen has also never been one to shy away from saying exactly what’s on his mind, regardless if it makes for an awkward or uncomfortable moment. His 3-minute political rant about feminism and toxic masculinity was certainly enough to make a few people head elsewhere, but if art occasionally makes the viewer or listener uncomfortable, it’s done its job.

Lyxzen ended his rant and Refused proceeded to mercilessly kick our asses with “Liberation Frequency,” “Refused are Fucking Dead,” and what ended up possibly being my favorite moment of the weekend with “New Noise.” For a band that famously and abruptly broke up for almost 15 years, leaving a confusing but inspirational legacy in its wake, it’s like Refused never left. Exhilarating, intense, meaningful, inimitable – that’s Refused. Copenhell, the bar has been raised. Hope you’re up to the challenge.

Given that the festival could’ve probably powered itself on Dennis Lyxzen’s energy alone for the rest of the weekend, the rest of the Thursday bands had their work cut out for them. Terror terrorized the festival with testosterone-fueled breakdowns and singalong choruses, while members of FEVER 333 would later draw gasps by scaling the height of the stage during their set. Slash (feat. Myles Kennedy and the Conspirators) was a sadly ho-hum kind of performance that looked and felt way too forced. Halestorm was simply not my cup of tea, so I opted to sit back on the hill overlooking the festival grounds of Refshaleøen with another pint among friends. 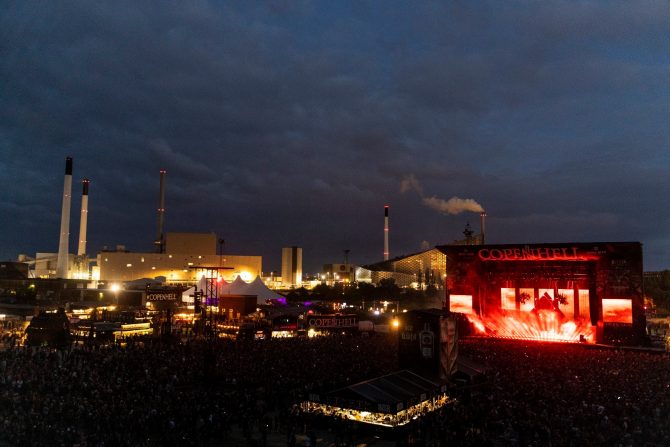 At around 10:30 pm, something resembling dusk had finally fallen over this summer night in Copenhagen. Predictably, the biggest crowd of the day had long since began to converge around the Helvete stage in anticipation of Tool, the headliners of the evening. Word had spread rapidly that they’d be playing two new as-yet-untitled songs from their forthcoming album. Their performance at Download a few days prior had reportedly left everyone at the rain-soaked affair completely spellbound. To say expectations were high would be a ridiculous understatement, as much as I wanted to temper expectations.

But, holy shit. From the moment Maynard James Keenan began the unmistakably breathy intro to “Aenima” and seamlessly transitioned to “The Pot,” Tool gave a downright transcendent performance. Confirming the hot speculation of new tracks being included in the set, they played the songs fans are calling “Descending” and “Invincible.” The songs were a bit more on the mellower and meditative side, channeling Keenan’s other work in A Perfect Circle. That’s not to say they didn’t have a place on the setlist, because they absolutely did. But the new material was not the highlight I thought it would’ve been — “Forty Six and Two,” “Schism,” “Jambi,” and “Sweat” were all played with surgical precision. It was like listening to the album, note for note, with a wall of psychedelic visuals complementing the mood perfectly with each moment.

By the time they finished with “Vicarious” and an amazing encore choice of “Stinkfist,” all my other memories from the day temporarily froze. Tool has a very subtle yet deliberate way of commanding your attention, both on a visual and audio level. Every note is so meticulously crafted, so calculated, that their stage presence becomes less about four people playing music together and more like one shared, collective consciousness acting on its own. They simply took my breath away.

This, unfortunately, was bad news for Day 2 closers VLTIMAS, who went on just after Tool wrapped up, and as we were leaving the festival grounds for the night. As much as I’m a fan of David Vincent and his new supergroup, it just felt wrong to end the night on any other note than with Tool. What can I say — music’s a helluva drug.

I eagerly jumped on the 666 bus back to my crash pad in Norrebro. Tomorrow, we’d be doing it all again — and Lamb of God, Slipknot, and so many others would be joining us. When my head hit my pillow, I remember thinking, “Getting enough sleep to rock the fuck out tomorrow is metal too, right?” Undoubtedly.