Why have I returned, you ask? There’s a festival I’d been curious about for a while called Copenhell that happens every summer in Copenhagen, billing itself audaciously as “the wildest party in the north.” Admittedly, my partying days aren’t quite on the level they used to be, but like some kind of suicidal cat with a tendency to find itself haphazardly swinging from a chandelier after getting into the stash of catnip hidden on top of the fridge, curiosity gets the better of me a bit too often. And why not? I have long fantasized about going to a proper, full-on European festival, and the metal gods seemed to all but conspire this year to usher me to this magical place.

The lineup, I think, was a factor. The weekend of headbanging and craziness was slated to kick off Wednesday with Katatonia, Eagles of Death Metal, and Immolation, and then we get throttled into full-go on Thursday with Clutch, Stone Temple Pilots, Refused, Terror, Tool, and Demons & Wizards, among others. And that’s just a smattering of the offerings featured.

But first, I had other matters to tend to – namely, Rammstein at Copenhagen’s marquee stadium, Telia Parken. 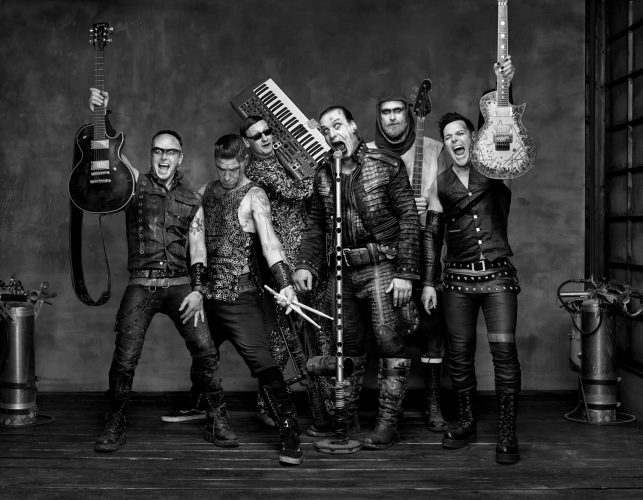 This show wasn’t originally a planned venture as far as my own adventures were concerned, but the timing worked out that the mighty German rockers would be in town the first night of Copenhell. Thinking ambitiously through my sleep-deprived state, I saw Katatonia wouldn’t be hitting the festival stage until 11 p.m. Hell yes, I thought. I’ll watch Rammstein burn down the city and flee just in time to watch Katatonia play their album Night is the New Day in its entirety. Sounded like an excellent, if not overly optimistic, idea.

In case you’ve been living under a rock for the past 20 years, Rammtein’s live antics have no equal. Maybe Metallica on a good night and a short list of others. But the combination of massive riffs, choruses with heavy crowd participation, vocalist Til Lindemann’s manic bleary-eyed thrashing around the stage, and enough pyrotechnics to be seen from fucking space, Rammstein is a can’t-miss show no matter where they are in the world.

Opening with the odd choice of “Was ich liebe” from their new self-titled album, Rammstein avoided their usual jaw-dropping intro in favor of a slower, more gradual buildup of heaviness. Strange, I thought, I was expecting to be nervously touching my eyebrows by now to make sure they were still intact. Just as I was starting to question their opening track selection, though, the telltale marching boots of “Links 2-3-4” came next, its familiar intro generating a roar of approval from the sea of fans. The combined sound was immense – the acoustics of Telia Parken, with its open-air roof on this warm summer evening in Copenhagen, were perfectly suited to handle the cacophony of Rammstein.

Oddly, the band’s stage antics were toned down a notch compared to what I’d seen in the past. Gone was the small platform on which Lindemann would stand and be raised, by himself, high above the stage. No sign of the bizarre yet fascinating spectacle of the S&M ritual the band usually undertook when moving to their smaller stage to play a few songs mid-set. (If you haven’t seen this, it’s worth finding on YouTube.) The antics did resume for new song “Puppe,” in which Lindemann brought out a giant baby carriage and proceeded to light it on fire during the song’s chorus, so there’s that.

Pyrotechnics resumed for later songs, albeit in moderation. I was eagerly awaiting the almost inevitable moment during “Engel” in which Lindemann would don a pair of gigantic angel wings and light them on fire; alas, that moment never came. Much to my surprise (and I’m assuming to that of 30,000+ others), the band used a subterranean tunnel to reach the smaller stage in the middle of the stadium to play “Engel.” No wild S&M show. No crawling. Instead, the band was joined by Duo Jatekok, a pair of French female pianists, who had also served as the opening act, in playing an acoustic, choral version of the song. Can’t say I saw that one coming. Regardless, it was fantastic. It also was a good way to break up the solid wall of power chords and headbanging that had been the story for the past 60 minutes.

Musically, Rammstein sounded as big and as bold as ever. The new material came booming out of the speakers like a thunderstorm over Berlin, while the familiar choruses of the band’s older work drew waves of emphatic howls from fans. Highlights of course included “Mein herz brent,” “Heirate mich,” and “Ohne dich.” Thankfully, the expected amount of stage chaos was taken back to familiar territory for “Pussy,” which ended the band’s first encore set. The fake giant penis also made a return. I wonder what they call that thing. Mein Schlong?

Returning to the stage for the second and final encore, Rammstein took us back to when it all started with “Rammstein.” It made me think of when I first heard the band while watching David Lynch’s Lost Highwa” as a slack-jawed teenager, another lifetime ago. Pretty wild to think that some 20+ years later, I’d be watching them play this song in a huge arena in the capital of Denmark.

They wrapped things up with “Ich Will.” While this wasn’t the absolutely fucking mental level of showmanship I’d seen from Rammstein in the past, it was still a powerhouse performance by one of the most entertaining and memorable bands on the planet today. Hell, we all get older and a little wiser. Maybe Rammstein have finally hit the point in their career where they want to make things last a little while longer, and constantly lighting themselves on fire might not be the most conducive act to riding the wave of success for as far as it can go. Whatever it is, this new formula works for them, and here’s hoping we don’t have to wait another 10 years for their next album.

As I was thinking about all of this, I realized there was simply no way in hell that I was going to jump on a bus and make it to the opening night of Copenhell. Sleep deprivation, along with the unfortunate discovery that there were no curtains on the windows of my room at my Airbnb, was not making this evening an easy undertaking. I mustered the energy to stumble the half-mile home and call it a night. There was still much headbanging left to do.