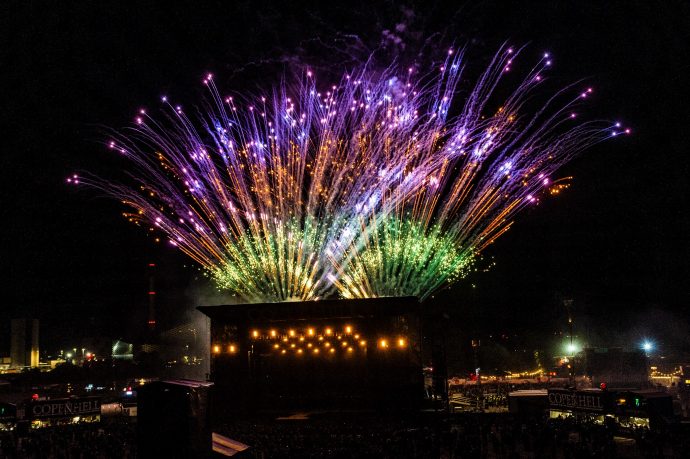 (A Seattle-based writer who we’ll call Gonzo ventured to Denmark for the 2019 edition of the Copenhell festival, which ran from June 19th through June 22nd. Today’s post covers performances on the fourth and final day of the fest. To read about Gonzo‘s experiences during the first three days, go here, here, and here.)

According to a poll on Copenhell’s Instagram story as of 10:21 a.m. Saturday morning, 64% of festival goers are tired as fuck. I counted myself among them. With a good night’s rest and wearing enough sunscreen to make myself flame retardant, though, we set a course on the 666 express to Refshaleøen once again. If we weren’t tired by this point, we’d be the exception.

Today was the final day of Copenhell 2019. The executive decision to eat something healthy for breakfast, I think, ended up being a wise choice. More fried food was wolfed down at lunch, just as While She Sleeps were getting ready to rock the Pandemonium stage. When we walked in, we could hear Candlebox closing out their set with the unmistakable chorus of “You,” but that would be all we’d get of our hometown grunge rockers. END_OF_DOCUMENT_TOKEN_TO_BE_REPLACED 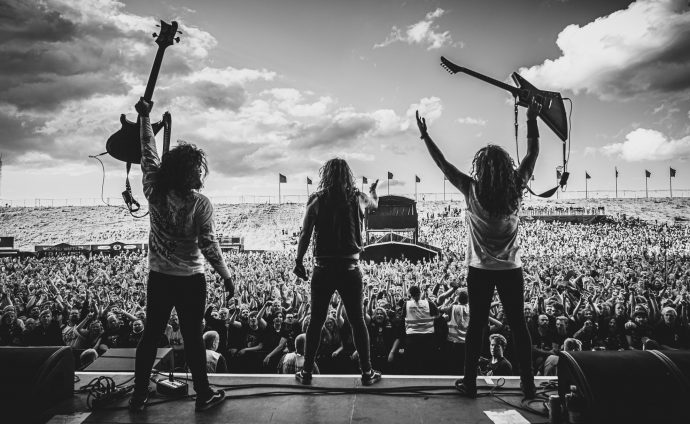 (A Seattle-based writer who we’ll call Gonzo ventured to Denmark for the 2019 edition of the Copenhell festival, which ran from June 19th through June 22nd. Today’s post covers performances at the third day of the fest. To read about Gonzo‘s experiences during the first two days, go here and here. The wrap-up comes tomorrow.)

After a rough start to the morning due to the sun’s fiendishly bright rays at a truly ungodly hour, coffee began replacing the hope of getting any more sleep. A risky endeavor, especially since the day would be pretty warm, and I am not built for the heat. My hope was that it would be cooler by the harbor at Refshaleøen, but we’d soon find out. Once more into the breach.

The unmistakable smell of barbecued meat and fried food on our way into the festival welcomed us once again. If I wasn’t busy watching bands today, I’d be rolling down the hill after eating my way through this place. Today would be the day I would eat several of whatever these “flying pancakes from hell” were. I didn’t know what made them special, but what I did know was that I didn’t want to have any other type of pancake ever again. END_OF_DOCUMENT_TOKEN_TO_BE_REPLACED

Jumping on the festival bus was easy enough for out-of-towners – the route number changed from its usual operating of “9A” to “666.” The quick ride to the harbor from the city center was full of death growls, beer, and very loud Danes. It was almost enough to make me pity the bus drivers in charge of this route, but they were dealing with the ruckus amazingly well. In fact, negativity just didn’t seem to be a thing in Denmark. You could really say everyone here was… hell-bent…on having a good time. (I also can’t promise that’ll be the last of my “hell” puns through the duration of this. No, I’m not even a little bit sorry.) END_OF_DOCUMENT_TOKEN_TO_BE_REPLACED

Why have I returned, you ask? There’s a festival I’d been curious about for a while called Copenhell that happens every summer in Copenhagen, billing itself audaciously as “the wildest party in the north.” Admittedly, my partying days aren’t quite on the level they used to be, but like some kind of suicidal cat with a tendency to find itself haphazardly swinging from a chandelier after getting into the stash of catnip hidden on top of the fridge, curiosity gets the better of me a bit too often. And why not? I have long fantasized about going to a proper, full-on European festival, and the metal gods seemed to all but conspire this year to usher me to this magical place. END_OF_DOCUMENT_TOKEN_TO_BE_REPLACED