Put all those vivid impressions together, and they leave me super-eager for Vitriol’s debut album, To Bathe from the Throat of Cowardice, which will be released by no less a label than Century Media Records on September 6th. 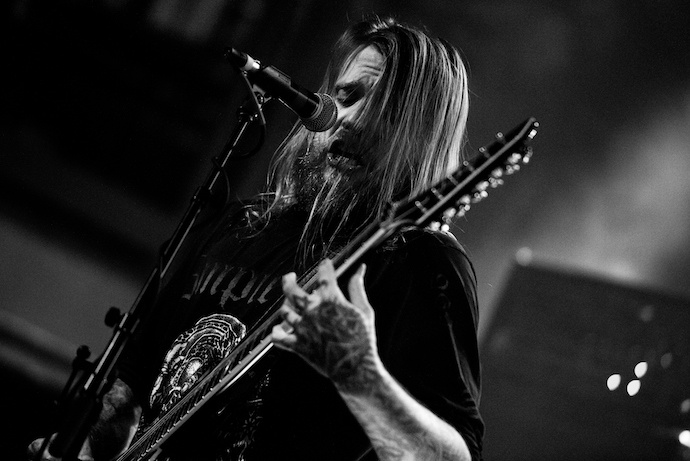 The first advance track from that album, “Crowned In Retaliation“, was released just this morning. The riffing is wild and cruel; so are the vocals. The drumming is obliterating. The bass rumbles and thunders in a way that augments the sense that we’re in the midst of war zone filled with crazed combatants. The dissonance, and the freakish veering and shrieking, generated by the guitar work, coupled with the eye-popping frenzy of the soloing, pushes the music even further into a red zone of hyper-destructive insanity.

In other words, great song from a rising star of a band that you need to get into fast if you haven’t already. 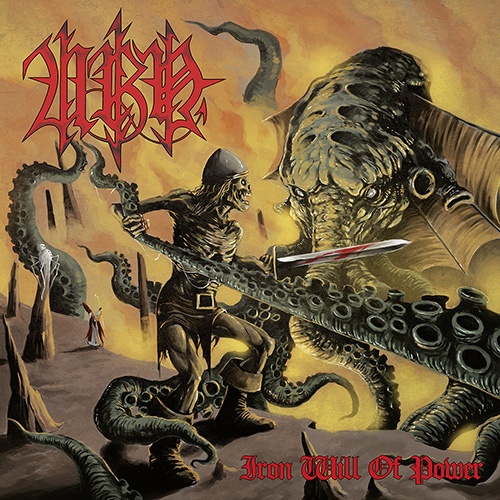 Two years ago we premiered a track from The Burning , the fourth album by the Finnish black/thrashers Urn in a career that reaches back to the mid-’90s, but the first album in nearly a decade. In that time, the band came apart but was then re-formed by founding bassist and frontman Sulphur, joined on that fourth album by guitarist Too Loud and drummer Revenant. That record was released by Iron Bonehead, but since then Urn have signed with Season of Mist for the release of their fifth album, Iron Will of Power, on September 20.

Urn’s line-up has changed since the last record. Now Sulphur is joined by guitarists Axelaratörr and Pestilent Slaughterer, and by drummer Gravementor. No matter, they can still step on the accelerator with iron-shod boots and still adroitly wield flamethrowers masquerading as musical instruments.

The track below, “Malignant Strange Vision“, is a full-throttle ripper, driven by excellent drum and bass work and fueled to a boiling heat by fiery riffs and glorious, shrieking solos. There’s a wonderfully incandescent quality to the song, but the full-blooded barbarism of the vocals makes it a vicious piece of work too.

The killer cover art was created by All Things Rotten. 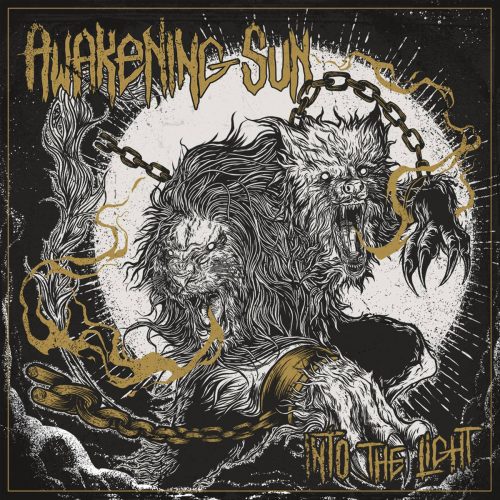 I first encountered this Lithuanian/Dutch melodic death metal band in May 2013 through a piece Andy Synn wrote that included one of their songs, and then encountered them again when Andy’s band Beyond Grace supported them on a UK tour in the fall of that year. At that time they were leading up to the release of their second album, Imbalance. Some years passed, and I caught up with their music again last summer in writing about a video for an advance track from their newest album Into the Light, which was eventually released in March of this year. Now they’ve released a video for another track from that album, one named “Scars“.

The video was filmed at an open-air festival, so those of us on the other side of the Atlantic get to see what these guys are like on stage. The song itself is a heavyweight brawler and mauler, even though it’s packed with electrifying thrash riffs. The grooves, which are prone to start-stop jolts, are powerful, and there’s plenty of flashy fretwork to be found here as well. It’s definitely a crowd-pleaser of a song, and this crowd indeed seemed pleased. 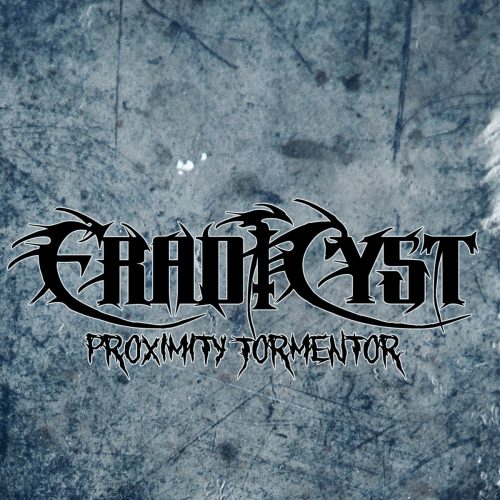 Eradicyst is an Ohio-based studio project consisting of vocalist Ryan Boehm and guitarist/bassist/vocalist Jake Nicholson. With assistance from drummer Jeff Morrow they’ve been recording and releasing individual singles about every other month since the beginning of this year. Their latest effort, “Proximity Tormentor“, was co-written by Gabe Zentner, who also performed a solo for the track.

There are fast rhythmic bursts in the song that sound like a jackhammer, except faster than any jackhammer could go, but no less pulverizing for that. There are also galloping rhythms, which get the blood racing, and combinations of swirling, jabbing riffery and braying chords that add to the thrill of the song’s high-octane rush. (Gabe Zentner‘s solo is also fantastic.) The tag-team vocal tandem of savage roars and scorching screams adds elements of wild fury to a performance that seems like a well-oiled demolition machine at work. And man, does this machine work well. 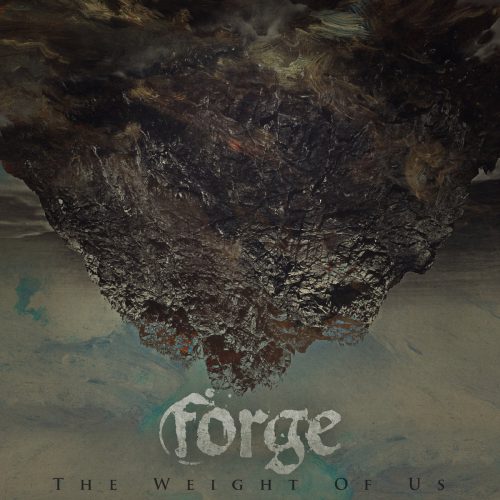 When I look at the title of Forge’s new album, The Weight of Us, I amuse myself by imagining it ends in a question mark. As in, “The Weight of Us?” And having heard the album, my answer is “A gigaton, except heavier?”

Another way to make the point is to look at Remy Cooper‘s fantastic cover art for this French band’s new album and imagine your head right about where the band’s logo appears, except scale it so your head is the size of a pinprick, and then imagine that inverted mountain crashing down, over and over again.

I’m late catching up to the album (it was released in late May), despite these words about it on starkweather’s FB page: “This Parisian trio is all about the riff, nothing but the riff. And pounding rhythms. No vocals. Just riffs. Take SAMO, Crowbar, Keelhaul, CROWN, early Mastodon (again, the Romano covers) strip out the vocals and you could be in the general vicinity of the megaton blockbuster neighborhood of riff city”. (You see now how I tried to improve on “megaton”).

It’s true that there are no vocals on the album. It’s also true that you won’t miss them. Because you’ll be too busy trying to find your teeth on the floor and stanch the bleeding from your skull.

But let me be clear, The Weight of Us is so good not just because it’s massively heavy and remorselessly destructive. The riffs really are killer, and the titanic grooves are unstoppable. In addition, there are threads of melody stitched into these crushing tracks that create dynamic contrasts and shift the mood (albeit briefly). Through these melodic accents the music becomes magisterial, yearning, despairing, and bereft of all hope, depending on where you are.

In a word, this is stupendous. 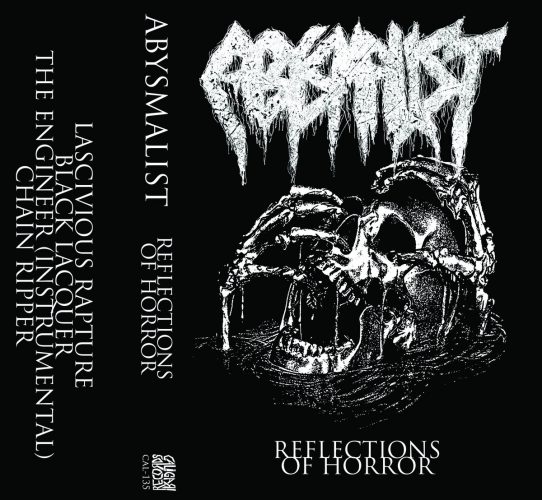 To conclude I’ve chosen the first advance track from the debut demo by Abysmalist, a horror-obsessed death metal band now based in Sacramento whose members (Federico Davila and Jeremy Meier) have extensive resumes of participation in various punk, metal, and hardcore bands in the Bay Area. The demo’s name, appropriately, is Reflections of Horror, and it will be released on cassette tape by Caligari Records on July 25th.

There are four tracks on this initial release, and the one you can hear now (published on Bandcamp yesterday) is “Black Lacquer“. There’s just enough murk in the music to seal your mind in a dank crypt, and the gruesome gutturals are equally subterranean. When the band lurch and stagger, and ooze disease and rot from their fretwork, it’s a morbid, sickening feeling. But they prove themselves just as capable of clobbering the bejusus out of you, and of mounting vicious juggernaut assaults. There are also haunting reverberations that ring out with a sorrowing spectral sheen.

Really good stuff, and I’m looking forward to hearing the other three tracks. Keep your eyes on this band.