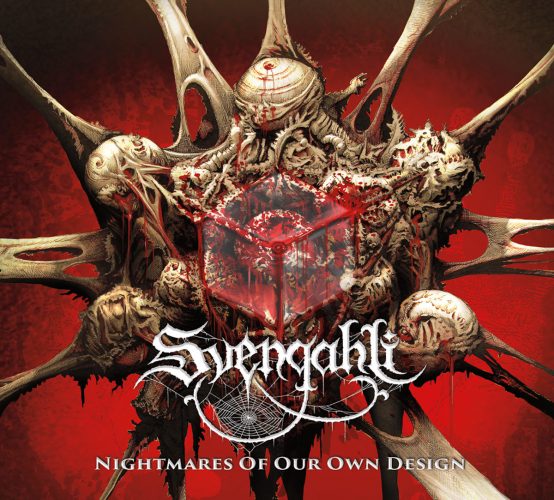 Alex Weber is a name that will already be known to many of you through his role as bassist (and a vocalist) of the progressive metal band Exist, as well as his session work and his live performances with other bands such as Defeated Sanity and Obscura. What you may not know, but are about to discover, is that Weber has also been devoting time to a progressive death metal project called Svengahli. That project is now looking forward to the March 6 release of its debut EP, Nightmares Of Our Own Design, and today we’re presenting the first single from the record — “Writing On the Wall“.

Before we get to the song — which is a kaleidoscopic marvel — it makes sense to learn about Svengahli‘s inspirations, as related by Alex Weber, and to identify the eye-opening group of guests he enlisted to bring the EP to fruition.

Nor surprisingly, given the names on that list, the music is a hybrid of musical styles, although it’s still fair to place it under the umbrella of progressive death metal. Further expounding on his objectives for Svengahli, Weber explains:

“I’ve always been interested in combining the harmonic language and the expression of the various forms of jazz, contemporary classical and improvised music into heavier and darker forms of metal because I’ve always seen a connection between them all. Classical music has obviously already had its influence on metal but there are many sides of jazz harmony that are just as dissonant and moody as a lot of metal AND the intensity that can be found in some forms of improvisation, to me, is even more powerful than most metal. These elements have absolutely had a huge impact in the shaping of the music on this EP.” 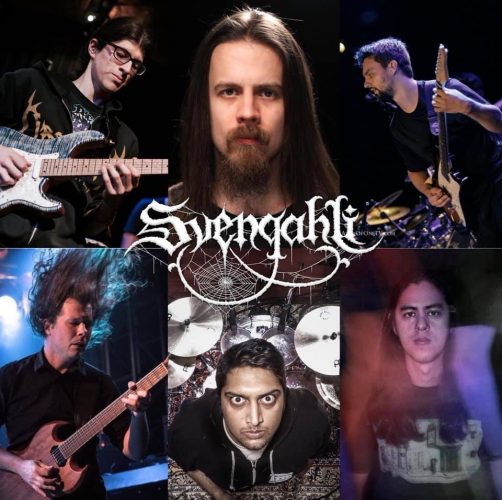 And now, with all these clues and other information behind us, let’s turn to “Writing On the Wall“. At almost 10 minutes in length, it’s mercurial in its progressions and mesmerizing in its effect. It’s often adrenaline-fueled and aggressive, with a strong rhythmic push, heavyweight riffing, and fiery, savage growls unmistakably linking the music to death metal traditions. But the music is also richly layered, dynamic in its tempo, and rapidly changing in other ways as well, with the sound produced in a way that allows each instrumental contribution to stand out, no one of them dominating the others.

Through its many changes, the song incorporates moody, mesmerizing, and sinister melodies; jolting chords and battering percussion; flickering arpeggios and persistently nimble bass-work; jazz-influenced accents (both soulful and discordant), and singing (both mysterious and soaring) to go along with the growls. Moreover, Rafael Trujillo performs a remarkable extended solo, using a guitar tone that resembles a tenor sax, which nearly steals the whole show. And for all its head-spinning permutations, the song also turns out to be very memorable.

Nightmares Of Our Own Design features striking artwork from Will Shanklin, who also created the art for 2019’s WAIT‘s 2019 EP We Are In Transit (The Artisan Era). Vocals were engineered by Kenny Eaton at Mystery Ton Studios in Monrovia, Maryland. As mentioned above, it was mixed and mastered by Anup Sastry.

We’re told that Svengahli‘s future plans consist of a follow-up full-length album, solidifying a larger line-up, and striving to turn the project into a live band as well.

One Response to “AN NCS PREMIERE: SVENGAHLI — “WRITING ON THE WALL””