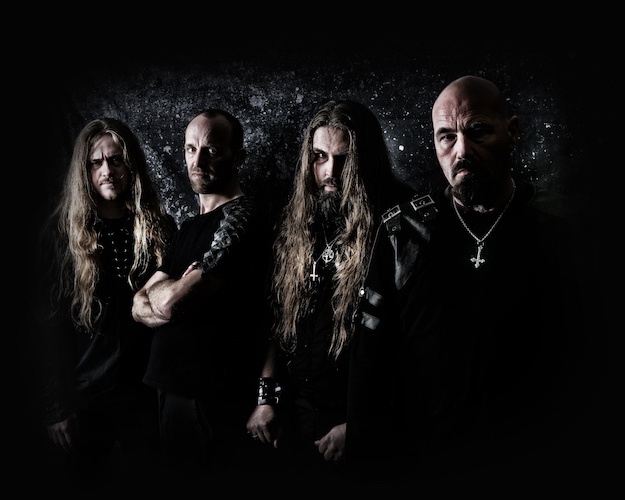 While I often find them very useful as a form of rough-and-ready heuristic shortcut, one which helps me, and my readers, quickly get into the right mindset and formulate our expectations accordingly, their misuse (or outright abuse) can be even more confusing than just saying nothing at all.

The three albums you’re about to read about all fall somewhere in/along this spectrum (whereabouts exactly is sure to prompt some lively debate), and while all have their flaws (which I’ve not been shy about highlighting) I’m pretty sure many, if not most, of our audience will find something to appreciate from their myriad metallic delights. 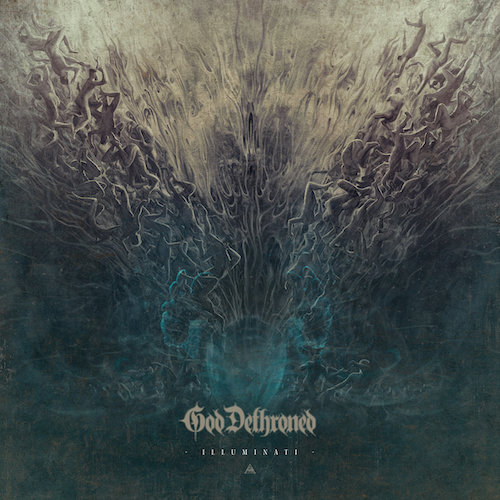 For their eleventh(!) album, their second since reforming and their first after the conclusion of their WWI-themed trilogy which began with 2009’s Passiondale, the band have concocted something of a “return to their roots” by switching their focus back to the occult and anti-religious themes which characterised their early work on records like The Grand Grimoire and Bloody Blasphemy.

Fittingly, this change has been accompanied by a switch to a slightly more “blackened” approach too, with several of these songs (particularly “Broken Halo” and “Spirit of Beelzebub”, two of my personal favourites) having more than a whiff of Necrophobic about them, while the occasional use of clean-sung backing vocals – sometimes prominently as on “Illuminati”, sometimes more subtly as on “Book of Lies” – gives the album a grim, melodic grandeur befitting its subject matter.

Now, as a huge fan of God Dethroned I’d like to be able to tell you that this early run of quality – up to and including the blast-driven, riff-heavy “Satan Spawn” – continues throughout the rest of the album, but that simply wouldn’t be true, however much I might like it to be, as the back half of the record suffers from a noticeable dip in quality/consistency.

Don’t get me wrong, there are still some great moments to be found.

The main melodic refrain from “Gabriel”, for example, is an absolute ear-worm (although the rest of the song doesn’t quite hit the same heights), while crushing closer “Blood Moon Eclipse” is, arguably, the heaviest track on the entire album, even if it takes a little while to find its footing.

But there’s no escaping the sensation that “Eye of Horus” is a disappointingly generic collection of riffs and melodies which feel like they come from a different, and much weaker, record, nor the fact that “Dominus Muscarum” does little more than waste 43 seconds of the listener’s time on sub-Dimmu synth work that goes absolutely nowhere.

Ultimately, as front-loaded as it is (and I really can’t say enough good things about “Broken Halo”, Book of Lies”, et al) Illuminati still holds up, even when taken in the context of God Dethroned’s impressively strong back-catalogue.

Is it their best work? No (although not for lack of trying). But perhaps it was only to be expected that album number eleven would find the band working their way through something of a transitionary period. After all, they’ve spent most of the last ten years slogging away in the trenches… so it’s no surprise that they might need a little time to rediscover themselves after that!

As the youngest band on this list (or at least the most newly established, as the various members all play with/in other bands as well), it’s perhaps not surprising that Horresque aren’t quite as polished or precise in their execution as either of the two other acts featured here.

It is, however, perhaps appropriate for them to sit smack-bang in between both God Dethroned and Svart Crown in this article, as their sound similarly sits somewhere in between those two bands – neither as overtly melodic as the former, nor as morbidly heavy as the latter, but still possessing an enviable knack from grim and gritty riff-craft.

Ignoring, for the moment, the relatively throwaway intro and interlude tracks (“Praeludium”, “Interludium I”, and “Interludium II”), the majority of Chasms Pt. I showcases a blend of meaty riffs and writhing tremolo patterns, interspersed with the occasional more melodic or moodily atmospheric section (see “Collateral Murder” or “Of Pride and Kazim”), all propelled by a percussive performance that largely favours impact and intensity over cleverness or subtlety.

So far, then, so prototypical, and I’d be lying if I said that Horresque have produced something here which is going to redefine the (sub)genre.

But there’s definitely a lot of promise and potential on display across these eight tracks (and three interludes), especially on those occasions where the band break out of the established “blast ‘n’ trem” ghetto and make some moves towards forging a more distinct identity for themselves.

Take “Murder Castle”. While it’s primarily driven by precisely the sort of barbed-wire tremolo work which I mention above, it also showcases a lot more groove, and a penchant for bigger, hookier riffs and refrains which makes it more memorable overall, without making it any less impactful.

Other highlights include the impressively ominous “MQ1-Predator” – both the longest and most varied track on the record, equal parts slow-burning menace and blast-furnace brutality – and the short, but savage, necksnapper that is “Deepwater Horizon”, both of which find the band moving away from the relative safety of the middle ground to push various aspects of their sound, the speed, the melody, the groove, to a higher level.

So while Horresque aren’t going to set the world ablaze just yet, they’re definitely worth keeping an eye on going forwards, and hopefully the next couple of years will see them find a way – either thematically, musically, or aesthetically – to really stand out from the crowd.

SVART CROWN – WOLVES AMONG THE ASHES

France’s Svart Crown (another long-running favourite here at NCS) have been on the cusp of a major breakthrough for quite some time now. In fact, if the world was a more just place, it would have already happened in 2013 when they released Profane, which was, and remains, one of the most underrated examples of Blackened Death magic from the last decade.

Whether Wolves Among the Ashes is going to be the album to finally shatter the stained-glass ceiling which has, thus far, kept the band from breaking out of the underground is uncertain, though, as while it’s both more ambitious and more accessible in many ways, it’s also not quite as cohesive as I (or others) might have hoped.

Those of you whose hackles were raised by my use of the word “accessible” should know that this isn’t necessarily a bad thing. The instrumentation might be a little more direct, certainly, but the rhythmic riffs and Gojira-esque grooves of tracks like “Art of Obedience” and “Exoria” are still as heavy and irresistibly headbangable as Svart Crown have ever been, they’re just a little more straightforward and streamlined this time around.

That being said, if you’re looking for something closer to the band’s usual brand of extravagant extremity, then both “Thermageddon” and “At the Altar of Beauty” should more than satisfy.

The former in particular is, for better or worse, the album’s pièce de résistance, delivering a masterful blend of blast-fuelled intensity and scalding riffology, touched by both dissonance and bleak, brooding melody, while also incorporating some unexpected (and ambitious) embellishments along the way, including some surprisingly effective, pseudo-clean vocal lines, which serve to only to deepen and darken the song’s already oppressive atmosphere.

Sadly, however, these highlights (and I am including both “Art of Obedience” and “Exoria” as highlights) are counterbalanced by the distracting oddity of “Down to Nowhere” and the lacklustre finale of “Living With the Enemy”, both of which show a laudable amount of ambition (there’s no disputing that) but whose execution doesn’t stick the landing.

The latter is, simply enough, a relatively solid song in the vein of latter-day Behemoth, and while it doesn’t sink to the level of ILYAYD, nor does it reach for the heights of The Satanist either, ending the album on a disappointingly middle-of-the-road note.

It’s the former though, which will doubtless be the most discussed (and most divisive) track, erring as it does towards the grungy sound of Alice In Chains for the majority of its run-time.

It’s not a bad song by any means (and doubtless will have its defenders, as it’s seemingly de rigeur these days for otherwise “extreme” bands to throw in at least one clean-sung track and then be praised for their “daring”), but it rings a little hollow to these ears, and ultimately winds up feeling more like an awkward curiosity than an organic extension of the band’s sound.

There’s still a fair bit to recommend here, and I don’t doubt that some of these tracks are going to remain in heavy rotation throughout the rest of the year for me. But, when all is said and done, Wolves Among the Ashes remains a frustrating, albeit tantalising, glimpse of a band who clearly still have a lot of potential, and a lot of ambition, left in the tank, but who sometimes don’t seem to know quite what they want to do with it.