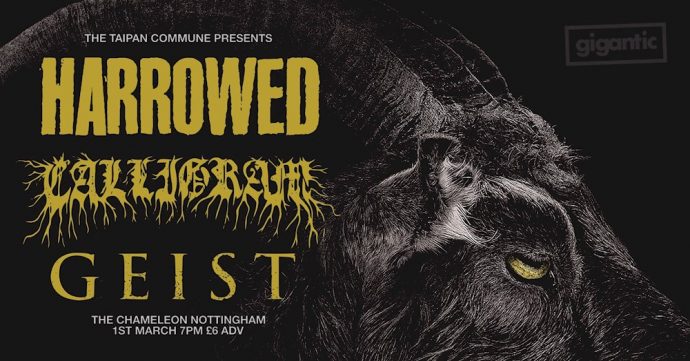 (On March 1, 2020, Andy Synn witnessed the performances of Harrowed, Calligram, and Geist at the Chameleon Bar in Nottingham, UK, and provides this review of the show, accompanied by videos that he made.)

It’s a little-known fact, but Hardcore was my “first love” when it comes to “alternative” music.

In fact, bands like Earth Crisis, Shai Hulud, and Vision of Disorder weren’t just some of my earliest encounters with music outside of “the mainstream”, but were my gateway into Metal too.

And while my tastes have definitely moved on since then, I’ve still retained a lot of love for the more metallic side of Hardcore, especially when/where it collides with other, even heavier, genres (last year’s Fuming Mouth and Totaled albums being prime examples).

My attendance at this evening’s gig was, therefore, pretty much mandatory, as all three of the bands on the bill (all of whom I’ve written about here before) have, over the course of the past couple of years, developed a well-deserved reputation as some of the best proponents of Metallic Hardcore that the UK has to offer.

And how was I going to say no to the opportunity to see them all together in a small local venue no more than twenty minutes from my house?

Openers Geist are the band I’ve written the most about most recently, having covered their performance with Leeched at the end of January, as well as having given an extremely positive review to last year’s fantastic Swarming Season not long after it was released.

That’s almost a handicap at this point, however, as what more can I really say about the band that I haven’t said before?

Coming across like a younger, hungrier, and – more importantly – groovier, sibling to bands like Cursed and Converge, the Newcastle-based quintet strike a careful balance between raw intensity and pinpoint precision tonight, delivering tracks like “Unnatural Selection” and “Services Rendered” (which you can check out below) like their lives depend on it.

And while the groovier side of their sound seems a little more prominent tonight – largely due to the big, beefy low-end rumble coming through the PA – that doesn’t mean that this evening’s set is asofter or more laid back than last time I saw them, as every chunky, chattering riff, punchy percussive combo and vein-bursting howl of frustration still hits you right in the chest, knocking the air from your lungs and leaving you breathlessly anticipating the next brutal blow.

Whereas the previous band are/were probably the most “pure” Metallic Hardcore band on tonight’s bill, Londoners Calligram are significantly more vicious and, dare I say it, “blackened”, as anyone familiar with their previous record, Askesis (which I wrote about back in 2017) will already know.

What they, and you, probably won’t know, is that the band’s upcoming album, The Eye is the First Circle (which I’ve already heard and will be writing more about soon), is even more vicious, and even more blackened, as tonight’s utterly frenzied, frantic, borderline fanatical, performance only goes to prove.

Of course that doesn’t mean that the group have completely abandoned or disavowed what they’ve done before – the tracks from Askesis and Demimonde all still fit perfectly well around the new material – but there are definitely a lot of moments tonight where, if you closed your eyes, you could easily have imagined yourself at a Black Metal show, not a Hardcore gig.

That being said, Calligram fans (and newbies) probably shouldn’t be shopping around for corpse-paint and spiky gauntlets just yet, as the quintet make sure to weave in a variety of other elements and influences – I hear a lot of similarities to the rampant Punk-Metal of Call of the Void (RIP), and maybe even a bit of Zao’s stripped-down savagery, in the band’s music  – amongst the skin-shredding blasts and strangulated tremolo lines too.

This really was a blistering, balls-to-the-wall performance, from a band who I expect, now that they’ve signed to Prosthetic Records, to be reaching a much wider audience very soon.

So, if you haven’t already, now is the time to get onboard just so you can say “I liked them before they blew up!”

Speaking of “blowing up”, Harrowed’s set tonight is just one explosive detonation after another, with the three-piece incorporating some seriously nasty, not to mention bone-crushingly heavy, Death and Grind influences into their violent, volatile brand of brutalising Hardcore.

Despite often being referred to as “the UK’s answer to Nails” (whose shirts I spot adorning several members of the crowd this evening), I find that this particular comparison doesn’t quite do the band justice.

After all, while there are most certainly points of similarity, it has to be said that Harrowed are a little bit more agile, and a little bit less meat-headed, and less afraid of slowing things down every now and then so as to let them breathe and to let the impact of their music land properly.

The differences are even more clear in the live arena, where every neck-wrecking spasm of Grind-influenced extremity is matched in turn by a plethora of harsh, spiky hooks and/or humongous, harrowing (pun intended) grooves designed to melt your face and turn your bones into jelly.

It makes for a much more interesting and immersive set than one built around constant, everything-turned-up-to-eleven aggression (although there’s definitely a lot of that too), and while I’ll definitely be nursing a few mental and physical bruises for the next couple of days, it’s my appreciation of Harrowed’s song-writing abilities, and their proficiency in switching things up so as to constantly keep hitting you in different places, from different angles, which I think will stay with me the longest.