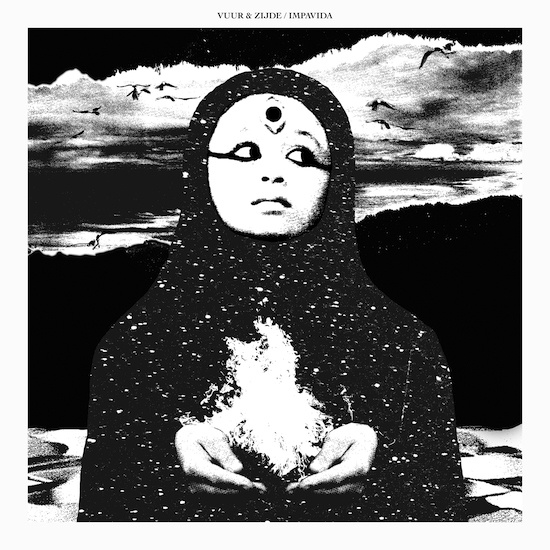 On May 8th Prophecy Productions will release a stunning album-length split by two formidable atmospheric black metal bands, the Dutch trio Vuur & Zijde (“fire and silk”), which features members of Laster, Nusquama and Terzij de Horde, and the enigmatic duo, one German and one American, who call themselves Impavida .

The three songs by Vuur & Zijde mark the recording debut of this new formation, while the two tracks by Impavida add to a discography that includes two full-lengths on Ván Records since 2008, the most recent of which (the astonishing Antipode) we premiered and reviewed here last year.

What we have for you today is the premiere of one of Impavida‘s two songs, one named “Gram“, as well as an impressionistic linguistic preview of what the band’s monumental second track holds in store for you (at a later time we’ll have something to say about the music of Vuur & Zijde). 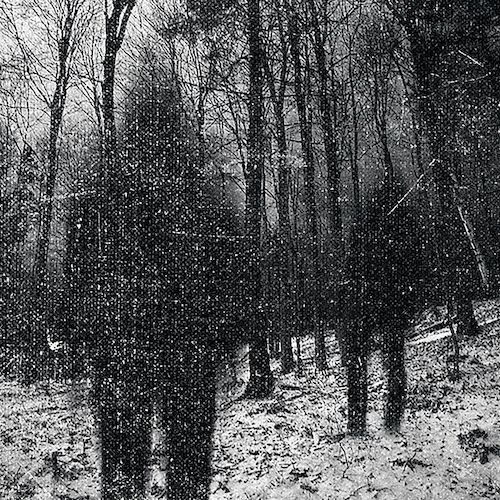 Impavida have been drawn by the void, and have drawn the void in the minds their listeners with astounding effect, creating the sound of revelation and devastation. They do it again here. In their words:

“‘Gram‘ is a short and gruesome song that describes the endless cycle and blurring of psychotic nightmares within the construct of reality. We are also pleased to welcome Oneiric of the projects Erraunt and Vpaahsalbrox for the incantation which closes ‘Gram.'”

The song opens almost immediately in a storm of thundering drums and intense, layered guitars whose surging rush and spectacular whirling fieriness is both eerie and unsettling, hysterical and harrowing. The music is so intense, as are the raw, howling vocals, which are equally lacerating in their emotional impact, that the song comes close to overpowering the senses, enveloping the listener in a shattering spectacle that’s also an immediate adrenaline trigger.

The “sheen” of the dense waves of riffing also has a wondrous celestial feeling, which becomes even more pronounced when the full-throttle drumming suddenly vanishes and the music transforms into a blend of acoustic strumming and mystical guitar reverberations. The effect is mesmerizing, yet those ringing, otherworldly notes still harbor hints of disturbing visions beyond our ability to fully grasp but inchoate with peril.

The second Impavida song on the split is much longer (more than 14 minutes), and while “Gram” is itself a transforming experience, “Wahn & Stille” is even more extravagantly capable of pulling your mind out of yourself and sending it into vast, unearthly dimensions where awe and fear coexist. The music is spine-tingling and mind-bending, richly layered with searing and glimmering tonalities, anchored by variable drum rhythms that push and pull the music’s energy and by prominent bass lines that surface in ways which enhance the music’s feeling of mystery. The vocals are also variable, venting larynx-shredding screams and rising in spectral wails.

Like “Gram”, the song sets fire to the imagination, but those flames burn longer. The music creates visions of staggering cosmic majesty, so sweeping and otherworldly as to dwarf the ant-like crawling of human existence, but the currents of glistening, ethereal melody become haunting, creating an entrancement of grief, and the swelling, sense-surrounding synths also seem to transport us up into the presence of formless wraiths who are lifting their massed voices in expressions of ceremonial reverence and solemn bereavement. Yet those sounds are so inhuman and unreal that they may provide little comfort to broken souls, even though they will inspire feelings of frightening wonder.

The Vuur & Zijde / Impavida split will be released on Digipak CD and on vinyl (black, and limited transparent green).

We’re also providing a stream of the first Vuur & Zijde track to be revealed from the split — “Zonnestorm” — in addition to today’s premiere of “Gram“.

One Response to “AN NCS PREMIERE: IMPAVIDA — “GRAM””