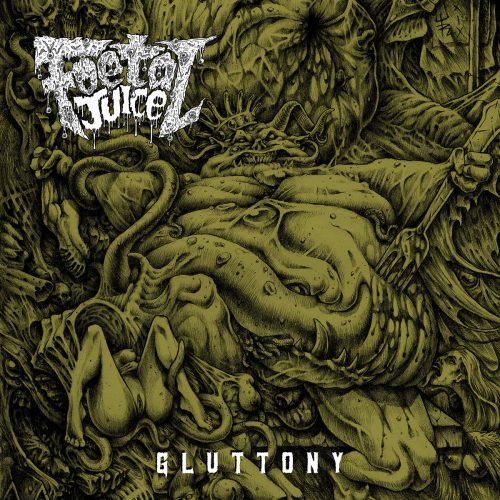 (We present Vonlughlio’s review of the new sophomore album by the UK’s Foetal Juice, which features cover art by Roberto Toderico. It was released by Gore House Productions on June 12th.)

I believe I have mentioned before that feeling you get when you discover (or were recommended) a band whose music leaves you amazed, and wondering to yourself why you weren’t able to hear about them before.

That’s what happened in the case of Foetal Juice, based in the United Kingdom, who just released their sophomore effort Gluttony through Gore House Productions. I found out about the project when the label was promoting one of the singles for this release, which left a favorable impression on yours truly. 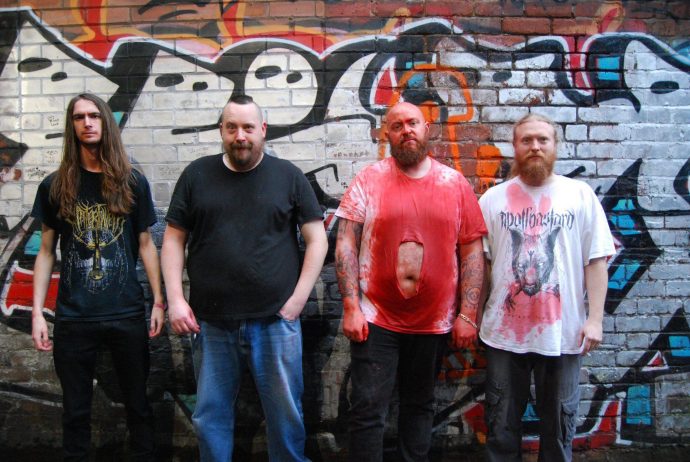 After hearing that single I decided to look them up to get myself acquanted with their history. After their inception back in 2005 they began releasing EPs and splits in 2007, culminating in the release of their 2016 debut album Masters of Absurdity. That was good old straight-up death metal to headbang to for the whole 34 minutes of its duration.  I won’t say that it was groundbreaking but it sure was a fun record that showcased great musicianship from all the involved.

Time passed on in relative silence until 2020 and the announcement by Gore House Productions of this new album.  As I mentioned, I heard the first single and that was the trigger for me exploring what they had to offer.  On the new album they’ve kept their sound with a natural production that gives life to each of the instruments.

As for the performers, there were some lineup changes in the band since the first album. Derek Carley (Burial, Wolfbastard) is now the vocalist, and Lewis Bridges (Ond) now handles the bass, along with Rob Harris on drums, and Ryan Whittaker on guitars. Together they have crafted something great and fun. These guys have a chemistry which transcends into the final product with tight performances, all of the elements shining on their own but also interacting as a very impressive unit in churning out these 12 tracks that hold the listener’s interest for all 38 of the minutes.

All involved have done a great job. The vocals have blown me away; the drums are punishing; and the guitars and bass make a very dynamic duo.

Overall this is something I encourage you to pick up. It’s a fun ride with serious music that should be given a chance. I am a fan now and hope that more people will give this project their attention.

One Response to “FOETAL JUICE: “GLUTTONY””