In early May (here) I tried to find the words to describe the first advance track from Æequiizoiikum, the new album by Khthoniik Cerviiks, and ultimately just threw up my hands and called it “a supernova-level musical spectacle, one that’s ingenious in its conception and eye-popping in its technical execution”. Now there’s a second track from the album out in the world, so it’s time to wrestle with words again. 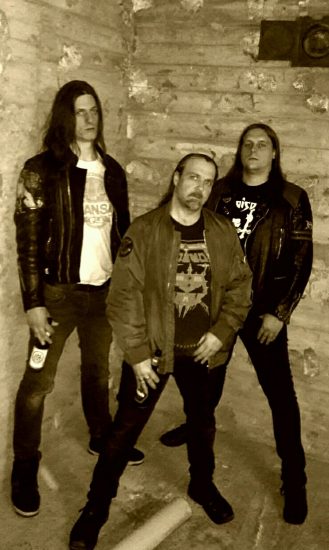 “Odyssey 3000” is another schizoid sonic spectacle, a cavalcade of booming, battering, and galloping drums, domineering, teeth-bared vocals, deranged riffing that whirls like a dervish, attacks with unrestrained viciousness, and spears up and out in flares of screaming ecstasy. Madness and murder reign, and the music also conjures a feeling of sonic “otherness”, a sense of glimpsing the frenzies of beasts in a netherworld walled off by incantations for our own protection.

Æequiizoiikum will be released by Iron Bonehead Productions on July 17th. 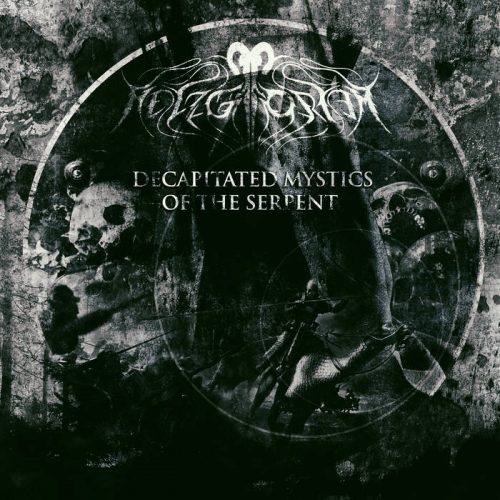 The name Helzgloriam rang a bell when I received a recent Bandcamp alert about them from Anthrazit Records, but it took some searching through our archives for me to place it — and found that I had briefly reviewed their debut album Infernal Monarchy five years ago. Had I missed something in the meantime? It turns out that I did not, because M-A reveals that they haven’t released anything since that first album, until now.

Their new record is also a full-length, entitled Decapitated Mystics of the Serpent. The first two tracks publicly open for listening are “Farahvang” and “Fosil“. Both of them have a penetrating, powerful heaviness in their sound. Both of them are also a hybrid of styles and sensations, with distinct moods.

“Farahvang” is a discharge of savage black metal augmented by majestic displays of exotic Eastern melody and other subtle symphonic accents. “Fosil” is even more multi-faceted. Ominous, threatening, and gloomy in its mood, it incorporates spectral keyboard emanations and sorrowful piano keys along with jolting and jabbing riffs. It soars — and then the harsh growls transform into clean singing, as a prelude to a climactic frenzy of scissoring riffs and blasting drums.

Helzgloriam hail from Iran. The release date of this sophomore full-length is July 20th. 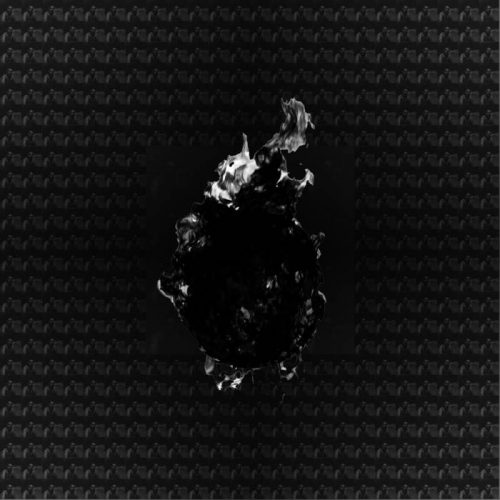 The Athenian one-man black metal band Eriphion made a very strong first impression through his June 2018 debut EP Hossana, which I reviewed here, praising it as “a huge surprise, an unusually accomplished and multifaceted creation that sounds years ahead of what you might expect from any band’s first EP”, and then Eriphion followed that with a 2018 debut album (Δοξολογία) that was even more enormously appealing. As I wrote in a brief review:

“This new album is black magic, by which I mean that it’s convincingly dark, often just as convincingly otherworldly, and also deeply affecting on an emotional level. There’s tension and gloom in the music, but also a feeling of occult mystery and of arcane poison in the vaporous emanations of these sounds. In writing those words, I don’t mean to mislead you — these songs are also propelled by powerful rhythmic drives, with a strong and lively bass presence and changing drum rhythms and cadences, which make this sulphurous and spectral music really head-moving.”

Eriphion‘s third release is a single named “The Black Flame“, which came out last month. It turns out to be a re-working of the first song ever composed for this project. The riffing is murky and menacing, but succeeds in casting an uneasy and unearthly spell. By contrast, the drums are strikingly vibrant, and you can clearly feel the pulse of the bass. The physical momentum of the song is irresistible (the drumming really is terrific), and the serpentine occult radiations that pass through the mind in listening are powerfully seductive and hypnotic. Ghostly wails and ferocious growls complement the music’s conjoined feeling of otherworldly exoticism and demonic peril.

This one is a track you’ll find your brain repeating to itself even after the music stops. It is indeed a spell.

“The Black Flame” is available on Bandcamp. The price is extravagant, but Eriphion has been giving away free download codes on his Facebook page. 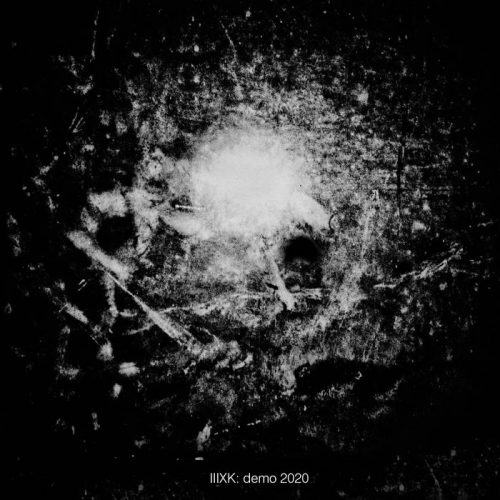 I was tempted to check out this next release, a debut demo, because it’s the work of a former member of the now-defunct Russian band Grey Heaven Fall, who put out some great releases before they split up last year.

When you listen, be sure to start from the beginning, even though the Bandcamp player skips over the opening track. That instrumental opener is well worth experiencing. With a militaristic drum tattoo at the beginning and end, it introduces you to the ominous power of IIIXK‘s heaving and thrusting low-end, the neck-bending force of the drumming, and the eerie grandeur of a soaring and seething melody.

After that, however, all hell breaks loose in the breathtaking assault of “Ключ к Абсолюту”. It strikes immediately with furious percussive cannonades, belly-deep growls and insane shrieks, vicious riffing, and celestial but apocalyptic synths sweeping the skies above. When the hell-for-leather momentum slows, the music becomes wondrous in its sweep, though still terrifying in its feeling of end-of-the-world drama.

A quasi-industrial, neck-wrecking rhythm surfaces and re-surfaces within “Странная вспышка вдали”, and the riffing seems like an enormous subterranean upheaval. At other times, the song is just plain terrifying in its berserker savagery. At still other times, when the drums slow into a stately pace, the music swells in displays of fearsome grandeur. The vocals are perhaps even more insane than in the preceding track, reaching spine-shivering heights of strangled screaming intensity.

“Монохромный рассвет (интро)” is an instrumental outro, but don’t dare skip it. It has a depressive yet simultaneously enlivening and mysterious atmosphere, conjuring sensations of entrancing supernatural wonder — and man, most normal people will be defenseless to the body-moving impact of the bass and the neck-cracking effects of the drumming. 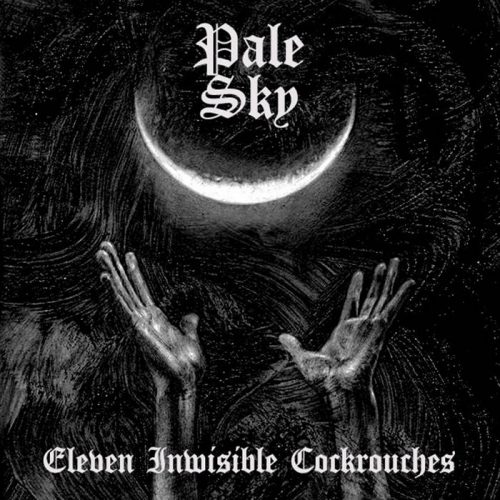 I was induced to check out this next EP because of the description provided by Rennie (starkweather) when he recommended it to me: “More Polish black metal. Supreme vocal torture with some of the long held screams… one in invisible sounds edited together to maximize the length, but, whatever, there are others that are obviously naturally long. Love it. Some rough edits here and there, but, probably all a work in progress – or, at least, while in lockdown”. As someone whose general antipathy to synths in metal is known to me, he also mentioned that for most of this record the synths “are buried in the mix and used texturally”.

The name of the EP is Eleven Invisible Cockrouches, and the band says that it was made “through online cooperation” among three participants — Adrian Możdzierz (guitars, bass, drum programing), Krzysztof Craq (synths), and Rhys Campbell (vocals). Together they’ve done a fine job of introducing themselves.

Because I’m running out of time, I’ll just say that they’ve found a meeting ground between the kind of physical pulse that hooks into the reptile brain, the kind of senses-enveloping keyboard-and-guitar vibrations that become immersive and effectively generate a range of atmospheric effects (most of them differing shades of sorrow and despair) that seem both human and alien, and the vocals really are frighteningly intense.

Unlike other records I mentioned at the outset of this column, here’s one I did manage to make it all the way through (only once so far). I’m surprised that I did, because the opening track was so unnerving. Paradoxically, the fact that it so unsettled me is also the reason I couldn’t tear myself away.

The grip of the music on this just-released demo (entitled Degenerator) derives not only from how scary it is, but from the unpredictability of the techniques the band use to strike fear into your heart. The music is intricate and multi-faceted. An extravagant range of dissonant, disturbing, and eerily hypnotic sonic textures feed into achieving a riveting impact (along with some megaton percussive detonations), and their combined effect swallows up the listener, as if we’re being engulfed by the maw of a titanic preternatural beast — after we’ve been dosed with a cocktail of potent hallucinogens.

It’s absolutely fascinating, but you might not want to listen to it right before bedtime, unless you enjoy nightmares.

I’ll again share the thoughts of Rennie (starkweather), who recommended it to me: “black metal with Celtic Frost/Triptykon avant elements. Rough in spots, adds to the disorienting effect at times. Only a demo but it is his second release this year”.

The band here is an Icelandic project named Sjálfsmorð af Gáleysi. Google Translate says that the name means “Suicide By Neglect” in English. It is the solo project of Gunnar Þrumi. Metal-Archives lists three albums and an EP in the discography along with this new demo.