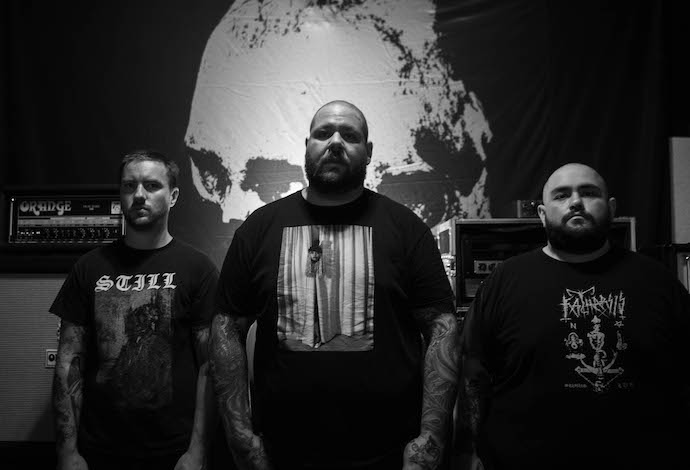 (Today is the day set by Relapse Records for the release of Primitive Man‘s new album Immersion, and it is thus a fine time to share with you this new interview by Comrade Aleks of the band’s vocalist/guitarist Ethan Lee McCarthy.)

Bad times for good guys and bad times for bad guys. It does not matter who you are when the world doesn’t stop crumbling down right beneath your feet. Extreme situations demand primitive reactions, just this basic set which kept our antediluvian ancestors alive, even as it seems we head on towards extinction with each step we’re forced to take by powers behind our backs. You can pray, you can speak your final manifest of disobedience… who knows if it counts?

In this environment the Denver-based crew of Neanderthal sludge-bringers Primitive Man come our way with their third full-length album, Immersion. We’ve searched for the source of its bitterness, ugliness, and anger together with Ethan Lee McCarthy (vocals, guitars) and here’s what we found.

Hi Ethan! Thanks for your time. I hope you’re fine there despite the entropy that’s gnawing the world we knew to bones. Now when we have a global pandemic crisis and the US has its own social problems more than ever, how do you see the release of Immersion? Did it have same value for you in the period of working on these songs?

A lot of the issues I speak on for Immersion are still relevant with what is going on in the world today. It’s just unfortunate that things are considerably worse.

It’s Primitive Man’s third full-length but there are also eight split-albums in your discography. Does the collaborative component mean more for you than regular studio work over numerous album?

We prefer putting out full-lengths. Some of our earlier splits were opportunities that were presented to us by record labels, others were just celebrations of friendships with the bands we did the splits with.

There aren’t many options to support releases nowadays — do you have some ideas about how to promote it now when all venues are closed and the prospects of bands’ live activity are blurred?

It is an unfortunate reality that we will not be able to support this record during a “traditional album cycle.” But to be fair, we toured on Caustic for three years, so hopefully people won’t mind hearing these songs when we can eventually get on stage again.

How is it fatal for Primitive Man not to play live? Would it work for you to record live streaming from your rehearsal place for example?

No, the volume and tone is extremely important for a Primitive Man performance. We play through a massive amount of equipment (double what has traditionally been allowed in most of the EU) and without the volume and feel I think it would be significantly less effective.

You recorded Scorn and Caustic with Dave Otero as sound producer and engineer. Did you return to his Flatline Audio Studio this time as well? How much time did it take to finish Immersion?

Scorn was released only seven years ago, but there are lots of recordings between it and Immersion. How far do you see Primitive Man from the point where you started back then in 2013?

We did a lot of experimentation in between Scorn and Caustic. And we only really began to sound the way that we had envisioned when we wrote/recorded Caustic. As someone who plays in the band, I think that Immersion is our best, most cohesive set of songs. Though we want to continue to grow I feel like the band has finally found its true voice.

Ethan, your lyrics usually deal with man’s extreme states, feelings like utter despair, frustration, and hatred. What has pushed you to express these kinds of moods through music? And how did you find the most fitting form for this self-expression?

I have been listening to heavy metal since I was a child due to having an older brother. And as I grew older I kept seeking the heaviest and darkest styles of music I could find. There is nothing like extreme music when you are trying to convey difficult emotion. I love all types of music but nothing will ever replace Heavy music for me. 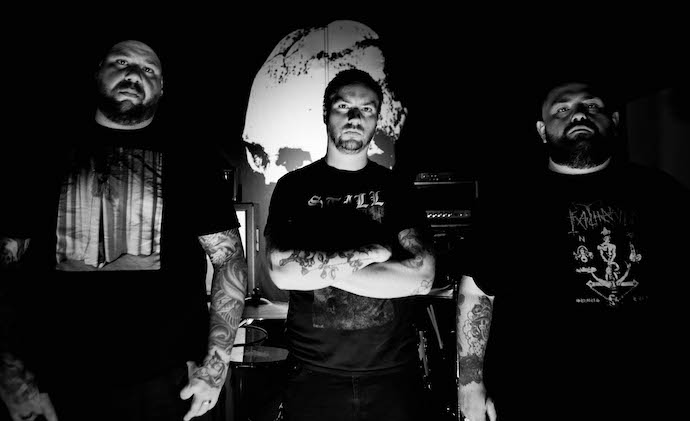 Sludge/doom metal is USA-born music, and though there are certain common points between doom and sludge some purists say “sludge isn’t doom”, others say “sludge was born from the hardcore scene”. How do you see the roots of your perception of sludge?

I grew up listening to everything from punk to death metal. So it seemed natural to take all the harshest elements from all of these genres and to try and make a band with it. I think our roots extend beyond doom and sludge. The speed alone is what makes us a doom/sludge band but I think we have little in common with a great number of our peers and their musical roots aside from playing slow.

There are sludge bands who focus on society’s plagues without pointing to a cure for those cankers… What about you? Do you see it as a way just to reveal shit happening inside of society or do you hope to change the world with some of your songs? How does it work for you?

Ethan, you’re from Denver, how much of your environment is in your songs? Can you tell whether you would record the same Immersion living in another State or in another country?

We are Denver to the bone. I 100% believe that we would not sound like this if we were not from here. This place has shaped all three of us as men and it is unlike any other state in the USA.

You know, it’s kind of a cliché but it looks like lots of extreme bands welcome the end of days in their songs, and now it doesn’t seem like everyone is happy with Orwell’s 1984 and John’s Book Of Revelation come true. How do you feel yourself with all these things happening around you?

I have never welcomed the end of days. I have been screaming about trying to dig ourselves out of this metaphorical shithole for years. And now we are here. In hell.

What does the “primitive man” image personify for you today?

We are here hoping for a better world so that we can continue to crush all enemies of art.

One Response to “AN NCS INTERVIEW: PRIMITIVE MAN”