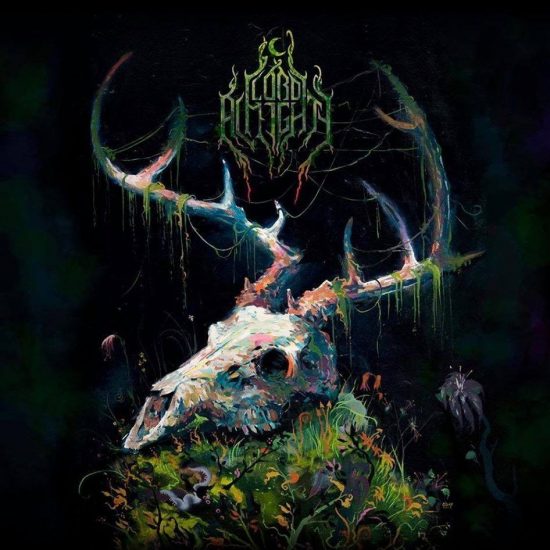 I’ll dispense with an introduction to this closing Part of today’s column. The intro to Part 1 was long enough.

Adam O’Day‘s cover art for Lord Almighty‘s forthcoming second album seized my attention before the music did, but man, the first advance track from that album turned out to be even more attention-seizing.

I didn’t know what to expect, in part because I hadn’t paid attention to this Boston group’s 2015 debut album, Paths, and in part because I hadn’t yet read anything about their new full-length, Wither. Later, I read that their base inclination is rooted in black metal, past and present, but that they bring into their music “a love for NWOBHM, sludge, hardcore, blues rock, and more” — all of which is borne out by “Cry of the Earth“. 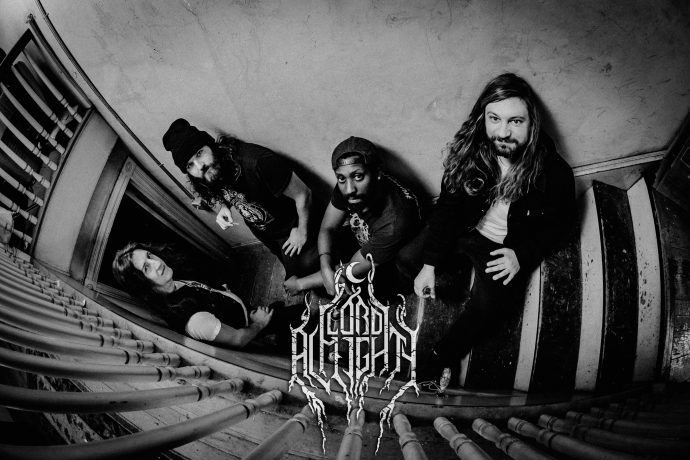 The song rips — with hammering, blistering ferocity — and it jolts and jabs, and rocks out in a blaze of d-beating glory, and it slashes and thunders against the back of your neck, and pulsates with infectious urgency. There’s a terrific spiraling, fire-breathing guitar solo in the song too.

And somehow all of these ingredients don’t resemble a bunch of leftovers from your fridge desperately thrown into a blender so you don’t have to expose yourself to maskless morons at the local grocery store. I’m not going to contrast that with a reference to a master chef whipping up a culinary spectacle in your kitchen, because the song’s too unpretentious for that, but I do want seconds.

Wither will be self-released on October 16th. 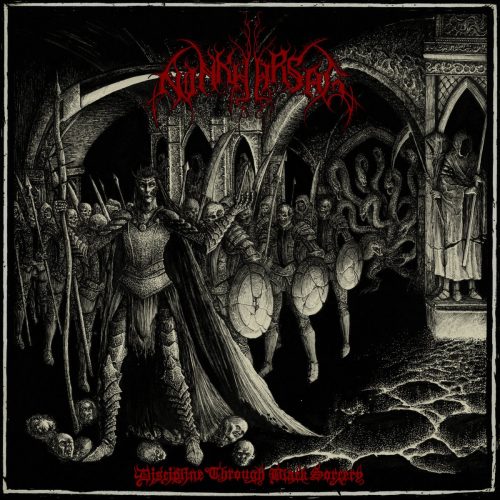 Five years have passed since this English band released their fine debut album The Blood of Celestial Kings (reviewed here by Andy Synn, with references to Dissection and Absu). At last, they brought us something new earlier this year, with a digital EP named Discipline Through Black Sorcery. I stupidly failed to pay attention to that release when it first emerged, but have now done so thanks to the decision of Vendetta Records to release it just a week ago on 7″ vinyl (and again digitally).

The title track is such a blazing, high-flying extravagance that it nearly blew the top of my head off. The drumming is a gripping experience all by itself, and the vocals are absolutely scorching, while the riffing is pure high-octane ecstasy — and then the song transforms into a huge, grand, heavy-metal headmover. The menacing grandeur of the title track carries over into “The Necromanteion” until the energy surges again, though in this case the mood of the searing riffage seems anguished. As before, the band mix in some other stylistic ingredients, including hints of power-metal, sword-and-sorcery grandiosity.

And to close this riveting EP, “The Lord of Death and Midnight” demonstrates again the band’s talent for writing a head-hooking song that interweaves lots of stylistic ingredients. It’s sinister, grim, and has an occult nightside aura, but serves up a bracing chug-fest along with bursts of derangement and flurries of beleaguered melody. 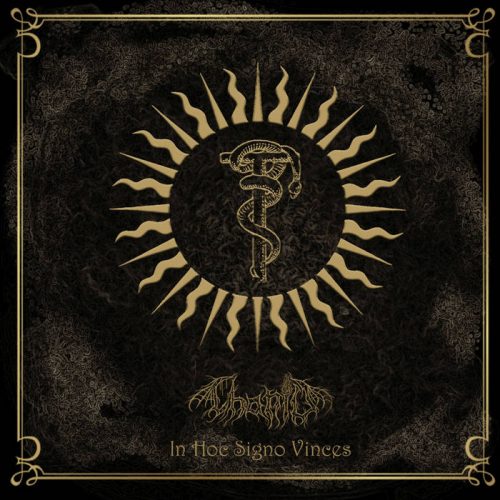 On August 15th the Polish black metal band Chanid released a new EP named In Hoc Signo Vinces. I learned of it after checking out a YouTube stream of the album’s title track.

That title track is entrancing despite how rhythmically bone-breaking the rhythm section are, and how rabidly unhinged the snarling vocalist is. The swirling riff vibrations sweep high, plummet into sorrow, and resonate with the gloom of cruel calamity and barren hopelessness, but they have a persistently all-enveloping impact. I had to catch my breath and shake myself to remember where I was after it ended.

When you start from the beginning of the EP (and I hope you will), you’ll first encounter the symphonic and choral opener, “Aποκάλυψις”, which sounds like a beautiful requiem, and just after the title track you’ll find “Luciferian Hesychasm” and “Enlightenment”, both of which are as intense, as emotionally wide-ranging, and as dramatically breathtaking as “In Hoc Signo Vinces”. Those songs are like two more parts of a dark, large-scale musical pageant — theatrical, multi-faceted, and ultimately tragic. 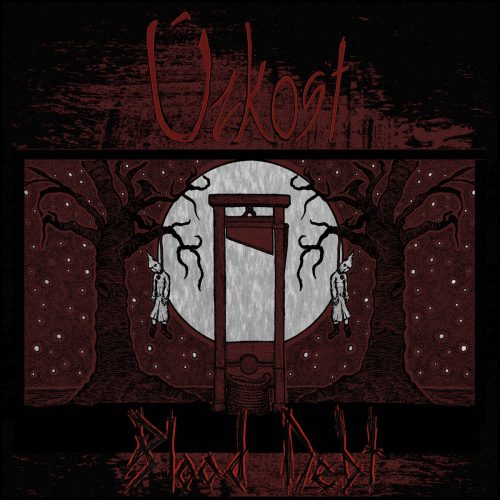 This Pittsburgh-based band used to be named Slaves BC. They re-named themselves Úzkost (a Czech word that refers to anxiety or urgent fear) as one way of signifying a change in their sound, which now amalgamates black metal, death metal, and doom. Their first single under the new name is “Blood Debt“, which was released on August 20th.

A feeling of ominous menace and chilling dread comes through in the song’s slow crusher of an opening sequence, and then it becomes a manifestation of terror and hysteria. Battering drums, a maelstrom of dissonant roiling guitars, and a tandem of furious roars and skin-splitting shrieks do an effective job of portraying madness driven by fear, and retribution driven by rage. Near the end, the song becomes an armageddon of thunderous drums, chaotically incendiary chords, and wild vocal intensity.

Speaking of retribution, that seems to be the subject of the video accompanying the song, which amplifies its intensity.

To close this two-part post I chose a video. It’s a studio session by unnamed members of the Swedish collective Reverorum Ib Malacht. The focus is on the drumming, which is nothing short of astonishing. Though I’m not 100% positive, I believe the drum performance is by the man identified on M-A as the band’s session drummer, none other than Janne Jaloma from Dark Funeral and Night Crowned (whom we interviewed here in April).

According to the brief notes accompanying the video, this was an improvised arrangement.  And although the drum performance steals the show, the ravishing cyclone of senses-searing surround-sounds is almost equally stunning.

I should mention that Reverorum Ib Malacht released a new album entitled Vad är inte sju huvud? (translation: “What is not seven heads?”) in late July. It’s an hour and a half long. I’ve listened to it once. I was left so uncomfortably shaken to my core that it may be some time before I listen to it again, though I have come back to the opening track more than once, due in part to the drumming.

I can barely begin to describe the album, and can barely begin to grasp how its often nightmarish cacophonies and dread-inducing hypnotics connect to the band’s conception of their music as Roman Catholic Black Metal. I’ll lift this passage from a long, three-year-old interview at Invisible Oranges

“Malacht is dark. It sounds alien and it is dirty as fuck. No. We rarely have audible riffing, nor do we care if we do. But we portray the depths of human despair and darkness. Not because it is good, but because herein lies the key to redemption. Face the world for what it is. Therein lies the fruit of salvation. Here is our worship. At the foot of the cross. Our good is dying. This is the banality of evil. Allahu akbar.”

I’ll include the full album stream after this astonishing video. Enter it at your own peril.