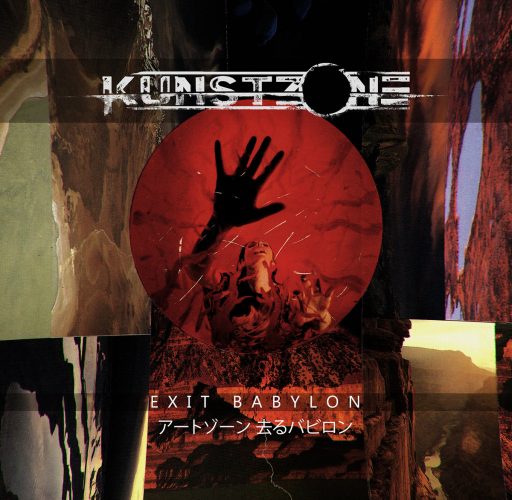 (Kunstzone released a new album last week, and so, like clockwork, we of course have a review of it by DGR, who spares no words.)

I’ve often pitched the Kunstzone project around here as sounding like the results of an ongoing battle between Anaal Nathrakh and Fear Factory. Each disc successfully blurs the lines between the two, in differing ratios depending on how the duo of multi-instrumentalist Alex Rise and Khaozone artist Andy felt at that particular recording session.

Thus, with four discs and a scattering of remix EPs and singles lying in their collective wake, you have a project whose debut release Eschaton Discipline splits about 60/40 in favor of Nathrakh’s brand of madness, and the following releases The Art Of Making The Earth Uninhabitable and Solarborn splitting about 70/30 and 80/20 in that same general direction. Which brings us to the group’s newest album Exit Babylon, which saw release on September 11th of this year.

Kunstzone have long had a thread of electronic overstimulation running throughout their music, if not as a fully stated background theme to each disc as they’ve slowly approached our collective silicate apocalypse through music. Exit Babylon is the album that brings that to the forefront. If at times it seems like the band are erupting out from behind the haunted screens of a dystopian cyber-future, it’s because that’s how Exit Babylon is designed to be.

To be fair, it’s not too hard to see the paths drawn by the imagined hell of previous albums toward what has essentially become our reality now. Exit Babylon just focuses a bigger lens on it this time around, all while returning to that previously mentioned fight that the band are constructed out of, placing the ratio for the first time at a neat 50/50 — especially if you happen to enjoy Anaal Nathrakh‘s more chug- and core-heavy songwriting. Which is a ton of fun, considering we were just having a conversation around these here parts about the revitalization of industrial metal.

When run up against its most immediate predecessors, Exit Babylon is an interesting record. It is still drenched in an aura of internet nihilism, yet this time around it’s a lot less immediately explosive. There are a lot more electronics present. While previous discs have used them to heavy effect as a way to inflict pain, this time around they’re the legitimate backbone of a few of the songs, in addition to adding to the constant and pervasive signal interference that weaves its way into each of the ten songs.

Exit Babylon is also built a lot more around sharp grooves and humongous guitar riffs. Solarborn and The Art Of Making The Earth Uninhabitable had their fair share, but there were also a ton of moments on those discs where it seemed like the Kunstzone crew were zeroing in on the ‘immolation via tempo’ method of songwriting. That’s less true here; Exit Babylon is a little less overwhelmingly vicious and a lot more hammering. It’s probably their easiest album to headbang along to since the group’s Eschaton Discipline debut.

Exit Babylon runs the gamut of song lengths, ranging anywhere between four to seven-plus minutes. The only short song is “Killroom”, which is still two-and-a-half minutes of electronic drums and interfering sounds that functions as something of a way to cool down before Exit Babylon launches into its final song. The album’s whole aesthetic is the decaying cyber-future laid bare before us. Songs can seem overprocessed and plastic, purposefully so a lot of the time, with multiple levels of differing interference, a wall-of-sound production that should make any fan of booming drums smile, and vocals that seem to echo off into the void.

As mentioned above, it’s not quite as overtly aggressive as Kunstzone have been in the past, with both openers “Right Of Retaliation” and “The Desire Apparition” built more around neck-snapping rhythm sections than rail-cannon-like acceleration. Kunstzone still jam the hammering blasts into the back-half of “Right Of Retaliation” — during which some might notice a few similarities to when Alex’s solo Tyrant Of Death project was especially prolific, and also one of the only times when Exit Babylon gets especially death metal — but a song like “The Desire Apparition” is far more traditional in a verse/chorus structure. It opens like a modern-day Nathrakh track, all ominous atmosphere and crashing instrumentation, but then settles into a pretty solid groove and backed by a power chorus — likely the first time those Fear Factory comparisons will really make themselves known — to make up the beast that is the song as a whole.

Kunstzone use Exit Babylon as their vector to fully lean into the electronics side of their sound. They bounce between so many different influences this time that you can spend whole songs just picking apart specific rhythms and samples to see how the group utilize them. These can range from bigger names that filled a lot of their work with the sort of booming production that Kunstzone really lean into here, to even smaller projects by virtue of the duo kind of unintentionally channeling them.

There’s a few points during “Toward Zion High” in particular where it seems like the Kunstzone guys might’ve fallen into an alternate dimension and found themselves playing in the same tide-pool of inspiration that Cyanotic drew from for their 2010 disc The Medication Generation — similar themes of being completely disaffected and drowning within electronics notwithstanding of course. Combine all that with the group’s penchant for a massive chorus comprising disaffected singing and distant production being much more prominent this time around, and you can understand why Exit Babylon might feel like a different sort of creature from what Kunstzone have conjured before. Not only do you wind up with a seven-minute epic with riffs that are borderline nu-metal for a bit in “Blood Cry” but also the combination of “Core Amnesia” being one bludgeoning section after another with many of its musical motifs fading into the clean-sung “Merciless”, and there’s clearly an effort to create less immediate neck-snapping and a lot more to nod along with.

Exit Babylon ends in an interesting way by choosing to fade out rather than exit on one bombastic final note. The last few songs are constructed so that the band are slowly slipping under the sort of electronic overstimulation that worms its way throughout the whole disc. Things get slow, the samples a lot longer and more distorted, and the final song is partially ambience and quiet piano. Kunstzone have played with the idea of performing an act like this before, so it’s interesting to see it fully fleshed-out, going from a song like “Right Of Retaliation” legitimately blasting itself to death to the booming drums and electronics of the back half, particularly the segue of “The Killroom” and as it fades into “IV – An Ode For The Demon” and just slowly slips back under the waves, making it so that “Babylon In The Year Of Fire” serves as the final musical conflagration and everything afterwards is just slowly falling back into the ocean of white noise from which this disc emerged.

Throughout a variety of different operating pseudonyms for its musicians, a wash of post-Y2K nihilism and glee, and the ability to set my watch by people misreading the group’s name for the first time, Kunstzone have amassed a decently sized body of material. It’s a project that, although blissfully flippant at times, has managed to keep a surprising amount of focus on the music, so that every album has felt like either a natural ratcheting up of intensity or, like Exit Babylon, a complete dash off into left field. Thrown in with the rest of their discography you can see how Exit Babylon has a sibling in the group’s debut Eschaton Discipline, just that this time the group have a lot of experience with their particular sound under the belt and can apply the specific things they were trying on that disc with a little more of an expert’s hand.

Exit Babylon, as mentioned above, is the most industrial-leaning of their releases to date, partially a time capsule of older sounds and partially a modern-day hammering with how Kunstzone like to write big, chugging guitar riffs to fill the time. They tie the album together fairly well using an array of differing samples or effects that build it into one massive piece. You can absolutely pick out favorite songs – and honestly Exit Babylon might be leading off with something of a showstopper since the ‘you just like to watch us suffer’ line ties together so well with the music behind it in the album’s opener – but you can also journey quite well through the album as a whole.

Exit Babylon may not be the most apocalyptic sounding thing released this year — hell, probably not even the most world-ending thing we’ll review on the site this week — but it certainly shows that Kunstzone have found their own, interesting angle on all the ways humanity is completely screwed, and have made it their musical home.

One Response to “KUNSTZONE: “EXIT BABYLON””