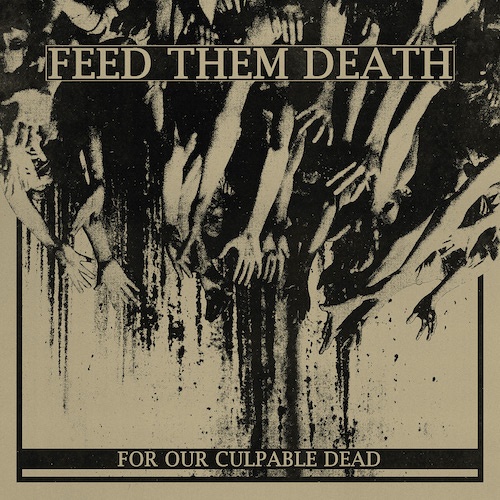 Those of you who are already familiar with the music of Feed Them Death will have a good idea of the sheer madness that will invade your mind when you listen to FTD’s new EP, For Our Culpable Dead, which is set for release by Brucia Records on November 2nd. Newcomers, however, should prepare for sonic shock and awe, the kind of ingenious yet unsettling experience that amalgamates bone-smashing violence, mind-boggling delirium, more twists and turns than an out-of-control roller-coaster ride, and an extreme disregard for mental or emotional comfort zones.

Feed Them Death‘s avant-garde formulations of death/grind have been boldly revealed through a 2017 EP that was then expanded into the debut album No Solution / Dissolution, released in 2018 by GrimmDistribution and Exalted Woe Records, and a second album released earlier this year by I, Voidhanger Records, Panopticism: Belong / Be Lost. Apparently ever restless, FTD’s soul creator Void could not let this year expire without one more brazen explosion of mind-mutilating inventiveness, and we present a further excerpt from the new EP today. 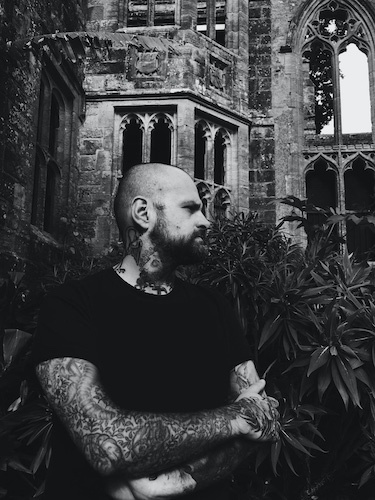 For Our Culpable Dead consists of three tracks, each one longer than the one before. The first track, entitled “A Subjective Tragedy”, was inspired by the myth of Faust as written by Fernando Pessoa. Void has explained: “Like the poem, the song is divided in five acts, each showing how different parts of our beings, be it intellect or experience or even our feelings, all are inherently unable to help us grasp the final meaning of life as we know it”.

However, if you’re expecting a neat five-part division in the music whose changes you can grasp with a single listen, perish the thought. The song is a massive, mauling experience composed of slaughtering drum battery, punctuated by brutal pounding, and a storm of roiling, writhing, darting, and seething riffs. The fretwork transforms into skittering, screaming, paranormal frenzies, and becomes a spasm of furious mayhem that straddles a line between dismal and deranged. No less unhinged than the instrumental escapades, the vocals furnish a mix of horrific roars and scalding screams.

The constantly mutating drum rhythms and perpetually morphing guitar emanations are also prominent features of the next two songs, both of which are based on writings by T.Adorno about the commoditization of art – and modern music in particular. But there are other eye-opening features as well.

“For Our Culpable Dead” (the EP’s title track) is a cornucopia of weird atonal sensations that come slithering and leaping out from within another war charge of rapidly shifting drum patterns and unhinged vocal cacophony, which this time includes fervent, red-throated yells. Neck-snapping snare beats occasionally pull you back on course, but as the riffing heaves, and burrows like feeding worms, it’s still an unsettling and bewildering experience.

But what happens near the song’s mid-point is if anything more unsettling. There, the song transforms into something more bizarre. Morbid, discordant piano chords clatter and bang above shrouds of blurred radioactive static and whistling electronic transmissions. You can imagine a performer lost in his own strange world, methodically weaponizing his instrument while his mind is whirling into dementia.

And then we reach the final track, the one we’re premiering today, “The Unattainable Joy“. A flurry of blasting drums, pounding piano, and blurting electronic pulses creates a segue from the title track, and then the song unfolds into a morass of grim riffing and burbling bass notes coupled with skull-cracking snare beats and macabre arpeggios. The tag-team of rabid screams and grotesque gutturals continue to make their own disturbing contributions, as the song whirls in lunatic ecstasy, attacks with sledgehammers, and mewls like an ayslum inmate pulling the wings from flies in a corner.

As on the other tracks, the song includes a multitude of guitar tones, all of them tuned with the objective of boggling the listener’s mind. The maelstrom does eventually subside, making room for bizarre yet somehow enticing bass soloing, droning feedback, and segmented drum detonations — an experience interrupted by seizures of instrumental violence and eventually leading into an ominous, magisterial passage accented by horror-show ethereal keyboards. Madness and mayhem return in the closing, once again twisting the listener’s brain into knots while pounding the spine into splinters.

As they say in the trade, this is a challenging listen. one that will hold the greatest appeal to people on the hunt for exhilarating adventures, even if it comes with risks of mental ruination. It is, as Void writes, “an anathema addressed to all the generations past, guilty for letting us inherit a world where tragedy is incumbent for all and happiness is something inherently unattainable.”

For Our Culpable Dead was mixed and mastered by Void and Dave Tavecchia at Twilight Studio in August 2020. It includes cover art by Plague, with layout and design by Giorgio Barroccu and Void. It will be released on digital, tape, and CD formats.