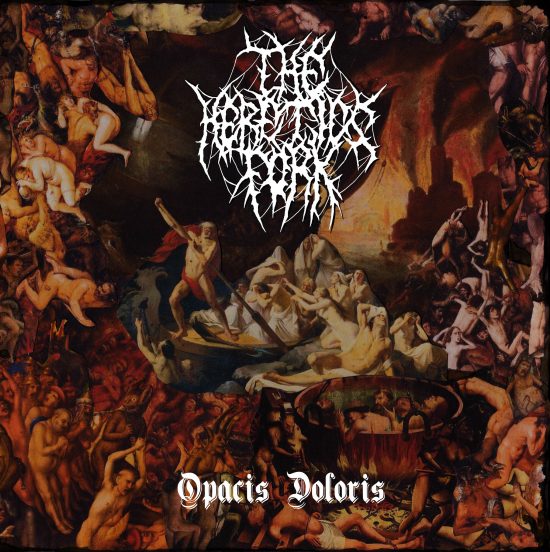 (The Heretics Fork is a band of unknown location and anonymous membership who’ve taken a medieval torture device for their name. This is Vonlughlio’s review of their new album, which will be released by P2 on October 31st.)

This time around I have the opportunity to review the sophomore effort from The Heretics Fork entitled Opacis Doloris, set to be released on October 31st via P2.  Before I start to dive in I have to mentioned that their debut Tomentore was released two years ago (also on October 31st) and for me was one of the biggest surprises of 2018 (see review here), and subsequently made it into my list of top BDM releases of that year.

One big mystery is that no one knows who is involved, there is no social media presence, without a care in the world, and this just adds mystique to the project. They obviously prefer to let the music speak for itself, and make no compromises to their artistic vision. The scene will take care of promoting it by word of mouth, with no problem, since the music is that good.

Their first album was a suffocating experience that made me feel as though my life was fading away with each passing minute, and I loved them for it.  Their mix of Doom and Brutal Death was the definition of perfection, and a lot of bands trying to do this should take notes. For this release the label includes these words on its webpage in regard to this new effort:

“The blades are sharper, the rope is tighter, and the iron is colder; The Heretics Fork drives the nails deeper and the unimaginable pain forces you to retreat to the darkest recesses of your mind. There is no escaping the realities of terror and despair.”

Just that statement got me excited to experience this new suffocating experience with new delights of pain to my soul. So imagine my level of excitement when the label decided to send me the promo (I’m forever thankful for their confidence). At the time, I was working and decided to cut the evening short to focus all my attention on listening to what I can safely say is one of my favorite BDM albums of 2020. I have now lost count of how many times I’ve listened to this album. If you thought their first one was leaving you out of breath, this one will make you feel like your soul is escaping your body and willingly ready to be  tortured.

The raw sound in each of the songs still lets each of the instruments play an important and identifiable role. The riffs are sharp as a cutting knife. and with the relentless drumming they make a perfect pair that feed off of each other, with a diversity that keeps you tied to what’s happening every second.

Keep in mind that the Doom elements are more evident in this album, and the song lengths are more extended, compared to their debut. But the BDM elements are present and perfectly incorporated into the songs, and this is yet another perfect pairing.  The vocals are low and guttural, and charismatic enough to make you want to emulate them (with no success from my part lol). They might be my favorite aspect of the music, since they give the kind of depth and mood that makes it easy to imagine yourself in a dungeon being tortured in medieval times.  I should also mention that Jaime Bailey from the mighty Brodequin (classic BDM vocals) and Paulo Paguntalan from the death metal band Gath Šmânê both contribute guest vocals, and both do a fantastic job.

As for lyrics they are not available, unfortunately. Regardless, you can take some clues from the name of the band, the title and cover of their album, and the song titles:

So you get the idea.

I know there are more BDM releases to come during what is left of 2020, and to be honest I already had an idea as to what my year-end list would look like, but this album has crept in and is not going anywhere. It’s available for pre-order from P2 now: