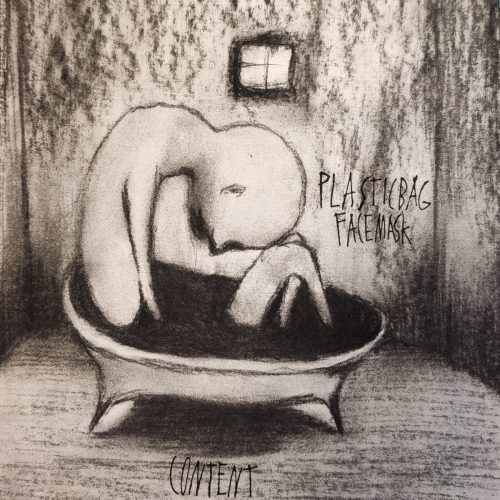 By sheer coincidence the two video premieres we’re hosting at NCS today (the other one is here) are devoted to the music of two-person bands. But the music could hardly be more different. In the case of this one, imagine your mind as a pane of glass, and then think of the song as a hammer smashing it into shards.

The song in question is “She’s the Cousin of the Chainsaw“, and it’s off a forthcoming album named Content by PlasticBag FaceMask from Fresno, California. A two-man head-wrecking machine, it consists of Jacob Lee (Keeper, Elder Devil) and Patrick Hogan (Time Bomb, Shrug), who in this project have devoted themselves to creating a schizophrenic hybrid of math metal, grindcore, and death metal. The album will be released on on November 27th via PlasticSkull Records. 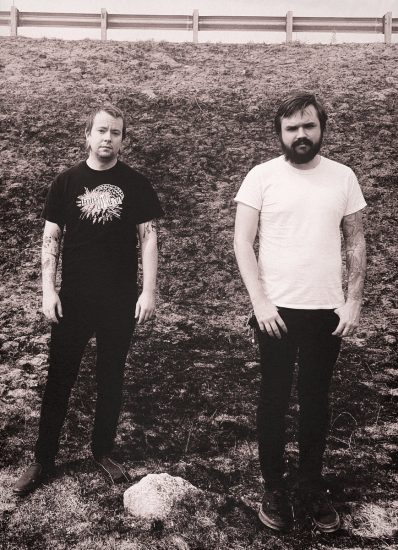 Chaos reigns in “She’s the Cousin of the Chainsaw“. In their tempos and rhythms the band shift gears constantly, moving from lumbering stomps to gruesome crawls, from pile-driving hammer blows to spasms of accelerated frenzy. The fretwork is equally unpredictable and destabilizing, veering from dismal reverberations to insectile skittering sensations, from weird mewling sounds to feverish screaming eruptions, from freakish, angular dissonance to hopeless seething and simmering. The vocals also leap about, descending into brutal death metal gurgles and exploding in hair-on-fire shrieks.

The music is willfully abrasive and unsettling, and delightfully unforeseeable in its permutations. Sometimes it seems like the sound of fingernails on a chalkboard, and sometimes like the feeling of getting mugged with tire irons in a midnight alley. Or maybe, as the video suggests, it’s the musings of a madman flailing about in a forest.

Of the album as a whole we’ll share these words from the group: “Content is a return to a more natural form of songwriting for the band. PlasticBag FaceMask has a habit of alternating between traditional songwriting methods and stacking as many impossible riffs as we can one after the other. With a few exceptions, we wanted this album to feel as if it could be one live set with very few gimmicks and effects. We also wanted to collaborate with friends again like we did in Riff Soup but on a smaller scale. We are very grateful to everyone for their amazing work on these songs.”

PlasticSkull Records will release Content on CD and tape, as well as digitally, and pre-orders can be placed now. The album features cover art by Matas Martinaitis. And below you’ll also find a stream of the previously released track “Pre-Madonna“, which is also crazed and discordant, though it seems more delirious and wild, and it features a different panoply of vocals than the song we’re premiering today.