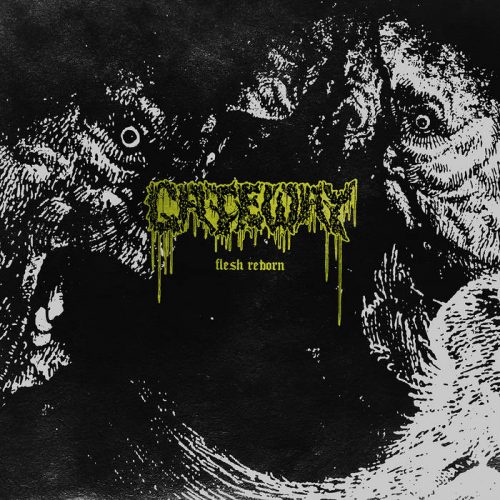 Last night I decided not to post anything today and instead spend the time trying to figure out how to begin rolling out my 2020 Most Infectious Songs list next week, and to get my shit together for when my day job starts whomping me in the head again on Monday. I have spent some time on both of those projects but my NCS obsession got the better of me, and I took a break to listen to some things on my ever-burgeoning list of music to check out. From that listening session, I picked what you’ll find in this round-up.

I have made a few compromises, compared to what I usually do in these posts, so I can get back to the other projects a bit faster. The main compromises were to dispense with tracking down, re-sizing, and uploading album art, and to write less.

Been anxiously awaiting the first preview of music from this death/doom band’s new EP, Flesh Reborn, and it finally arrived today. The ferocity of “Slumbering Crevasses” will maul and mangle you, and the cavernous monstrosity of the vocals and quivering eeriness of the leads may put the hair up on the back of your neck too. When the song slows, it’s still punishing, and even more apocalyptically frightening.

I don’t know how I missed this new Vielikan single when it was released in September, but thankfully Rennie (starkweather) brought it up when he and I were discussing the first advance track (streaming here) from Omination‘s new album (Fedor Kovalevsky is the mastermind behind both projects). Prepare for full-throttle blackened terror and unearthly magnificence, but also prepare for lots of mercurial twists and turns and extravagant, emotionally intense vocalizations. Breathtaking music….

On New Year’s Eve Fleshgod Apocalypse released a cover of the 1998 hit single “Blue (Da Ba Dee)” by the Italian electronic group EIFFEL 65. As DGR wrote when I pointed him to it: “I see Fleshgod have lost their minds during lockdown…. and they didnt even fucking do ‘My Console’. What the hell sort of amateurish surface level Eiffel 65 bullshit is this. I want to hear someone growl ‘OMEGA BOOOOOST TO RESIDENT EVIL’.” To be fair, Fleshgod did put their own savage symphonic spin on the song, though they left the catchiness in. Listening to those lyrics being growled is also hilarious.

Now I’m turning to a couple of excellent complete albums that I’ll probably never get around to reviewing but do want to mention, via the lame recourse of just highlighting one song from each of them. In the case of Burning Palace‘s new album Hollow, it’s a song called “Plagues“.

This Santa Rosa (California) death metal band display impressive talent here, amalgamating booming grooves, jet-fueled mayhem, and alien atmospherics. The song turns on a dime, again and again, and is packed with technical flourishes and grotesque vocal savagery as well as all the many changes in tempo and mood. On top of all that, the soloing is absolutely wild. And don’t stop here — the whole album is full of surprises.

Roaring Eye is the second album I want to quickly mention in this round-up. It was released on December 28th by Bloodred Distribution on tape (there’s an earlier CD and vinyl release by Amor Fati) and features the solo talents of Omega, who is also the mind behind Darvaza. The song I chose to highlight is “Crawling the Earth“.

If you’re unfamiliar, this powerhouse of a song reveals the importance of Omega‘s wailing singing voice to Nubivagant‘s doom-influenced variant of atmospheric black metal. And the riffing is magnetic, magnificent, and emotionally penetrating.

(In addition to the label releases, the band is also selling a digital download as well as the physical editions.)

Nubivagant‘s track began taking us down a trail of tears, and “Appalachia” will take you further along that trail. It’s a beautiful song, but unmistakably (and soulfully) sad. Guitarist/vocalist Sean Katz and cellist Kakophonix do a great job summoning the dark backwoods ambience and culture of the region that gave the song its name. The song is not new — it’s the title track to an EP released in July — but the video is.

I’ll also mention that Osi and the Jupiter participated in a four-way split named Songs of Origin and Spirit that was released by Eisenwald in December, along with By the Spirits, Mosaic, and Fellwarden. That one is also well worth your time too.

SONGS OF ORIGIN AND SPIRIT:
https://osifolk.bandcamp.com/album/songs-of-origin-and-spirit

To close, there’s just no way I could resist including a mind-fuck of a song named “2020 WILL BURN IN HELL FOREVER“. It dropped along with a video on New Year’s Eve. Both the song and the video are kind of freakish. The vocals are unhinged, as well they should be given the song’s subject matter, and the band are just as liable to beat the hell out of you as they are to use their clanging chords, ringing arpeggios, tinkling music-box tones, ghostly electronics, and maniacal drum eruptions to twist your cranial neurons into knots. The song seems to end a couple of times, but continues on in unpredictable ways.

Portrayal of Guilt‘s most recent album is We Are Always Alone, and that will be released on January 29th by Closed Casket Activities. Three songs from it can be streamed at Bandcamp:

6 Responses to “SEEN AND HEARD ON A SATURDAY: GATEWAY, VIELIKAN, FLESHGOD APOCALYPSE, BURNING PALACE, NUBIVAGANT, OSI AND THE JUPITER, PORTRAYAL OF GUILT”