To begin, I’ve chosen two songs that appeared during the last two months of 2020, both of which are part of an album entitled Siste stopp skjærsilden that’s planned for release later this month. The band is Noen Hater Oss from Stavanger, Norway, which began as the solo project of Raum and now also includes vocalist Morloc. Their discography includes a demo and two full-lengths, but they are new to me. 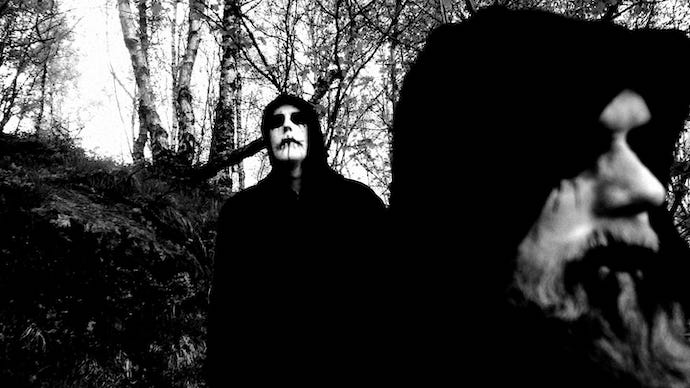 The new album’s cover art looks like the rendition of devilish fairy tales, and that imagery seems perfectly in keeping with the most recent of the two songs I found, “Liksvøpet“. There’s a wild, cavorting, and yet menacing quality to the riffing, and the vocals are as unchained in their viciousness as you could want. When the bullet-spitting drums slow and then disappear, the atmosphere of the music takes on a dreary cast, though the swirling leads maintain the music’s supernatural aura. The song continues to change in alluring ways as it goes, altering the mood but never loosening its grip.

The second song, “Den siste salme” (released in November) is more ravaging and less mystifying at first, but that crazed, dervish-like outburst is thrilling. And like the first song, this one moves through changing phases, sometimes bleak and sinister and sometimes glorious, thanks in part to a wonderful trumpet-like guitar solo and to waves of ringing guitar near the end that become spellbinding. The strumming et the end, coupled with eerie ambient tones makes for a wonderful outro. This song, too, is magical.

Siste stopp skjærsilden will be released on CD by Nykta Records, and a vinyl edition is also expected at some point. I’ve read that the full album will also be available for streaming around the same time as the CD release on all the standard platforms (Spotify, Apple Music, etc.) and also on the Nykta and Noen hater oss Bandcamp sites. 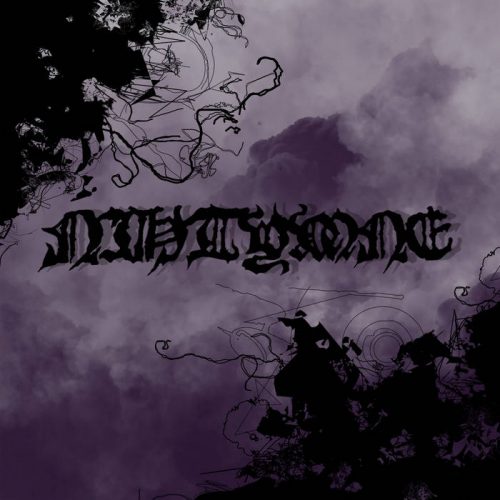 Now I turn back to the old year, with a self-titled album released on December 29th by the Argentinian one-person band Nihtymne. Its opening track seemed to connect (at least to me) to the kind of deviltry presented by those Noen Hater Oss tracks, perhaps in part because the opening song “Fata Morgana” is an allusion to the Arthurian sorceress Morgan le Fay, but more precisely is a term that refers to a form of “superior mirage” that appears above the horizon, fairy castles in the air or false land created by witchcraft to lure sailors to their deaths.

But that’s not the only connection. The music in “Fata Morgana” is also wild and devilish, with the kind of ebullient flickering and darting riffs, molten bass notes, and hammering drums that get the blood pumping in a hurry, while also generating a feeling of witchery at work. The shrill, shrieking vocals are maniacal, enhancing the madness of the music, which has a compelling ability to pick up the listener and whirl them away, breathless.

The remainder of the album is for the most part equally electrifying. The songs rely heavily on feverish, gleaming riffs whose immersive and panoramic qualities are potent and whose morphing moods are penetrating. Even as it blazes, the music also often has the air of ancient music, carrying melodies that have a grand medieval resonance — but Nihtymne suddenly spices up even those passages with electric slashing chords that connect to classic heavy metal and hard rock.

(Thanks to speelie for recommending this album.) 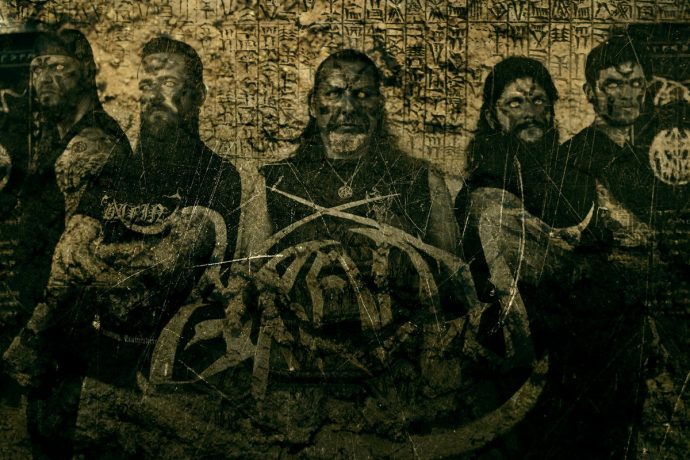 The last time I wrote about this Israeli black metal band a few months ago it was for a premiere of a song off the vinyl reissue of their 1999 debut album, The War on the Wailing Wall. At that time I noted that Arallu’s music had evolved considerably since their debut, and has come to more strongly incorporate Middle Eastern melodies into their warlike formulation of black metal. On New Year’s Eve Arallu released a video for a demo version of a new single which provides another demonstration of that point.

Even with the patent savagery of the vocals, “Satanic Spirit” is a thoroughly beguiling song, whose sinuous and swaying melodies create an exotic atmosphere. When the hard-charging drum rhythms relent, the melody turns sorrowful and then eerily sinister — and then crazed and violent, before one last chance to fall under the spell of desert djinn.

This new song will eventually appear on Arallu’s upcoming eighth album. Arallu state that the album name, release date, and label will be announced soon. 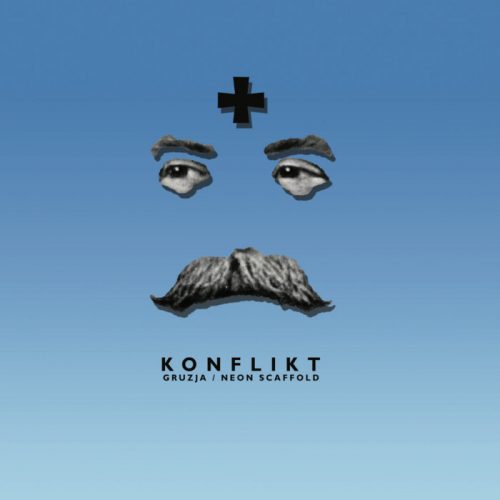 I became completely fascinated by this thoroughly irreverent and unorthodox Polish band, whose line-up includes members of Furia, Mentor, and Biesy (among other groups), when I encountered (and hastily reviewed) their 2019 second album Jeszcze Nie Mamy Na Was Pomysłu. Since then they have released a two-song 2020 EP named Pierwszy koncert w mieście (one of which I discussed here), and more recently a split named Konflikt with the Russian band Neon Scaffold.

Gruzja’s side of that split consists of four tracks, which I only checked out for the first time yesterday. Though tempted to comment on a track-by-track basis, I’ll spare you that and say instead that the songs (including the widely varying but usually insane vocals) twist and turn in ways that are likely to keep you on the edge of your seats, particularly because Gruzja don’t feel beholden to stay within the confines of metal. They’re often heavy and hard-hitting enough to give your spine a good jolting and your neck a good workout, but they’ll also make you want to bounce, and what transpires around the compelling rhythms is weird and wondrous, exotic and unbalancing, dreamlike and dread-inducing.

I’ll mention that I could swear I’ve heard “Gruz 2020” before, but can’t recall when… maybe I heard it last fall and then foolishly failed to follow up when the split was released. But once you’ve heard those dancing keyboards, they get stuck in the head.

Sorry to say, I haven’t yet listened to Neon Scaffold‘s side of Konflikt, but I intend to — and I’ve included a link to their songs below.

(Thanks to Rennie (starkweather) for making me aware of the existence of this split.) 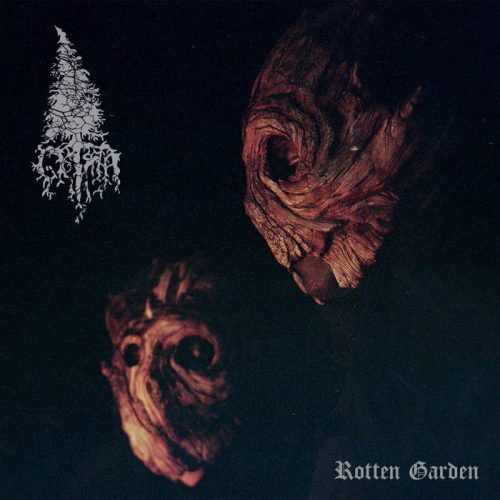 Now it’s time to look forward again, with a song from Rotten Garden, the forthcoming fourth album by Grima from Siberian Russia.

There’s a point at which the sweeping immensity of the music vanishes, leaving you to the tender mercies of night birds, celestial ambient shimmer, and the ringing of slow, wistful notes. After that interlude, the music again becomes towering, but the mood is devastating — and made even more shattering by yet another tremendous solo. The music again sends you into the skies, caught up in a great tragedy….

Rotten Garden is set for release on January 22nd by Naturmacht Productions. 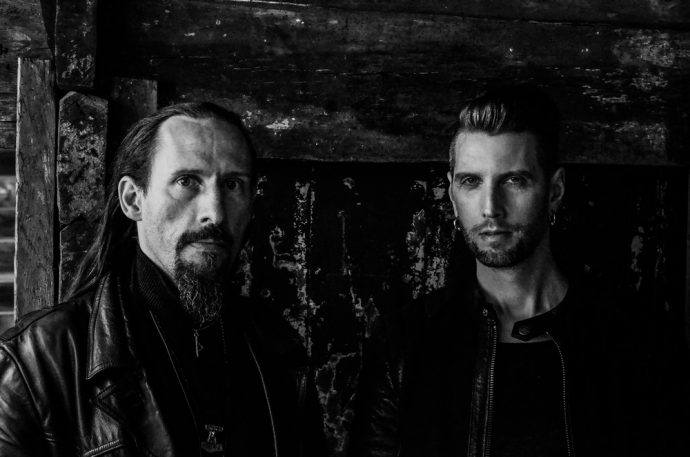 I enjoy throwing curveballs at the end of these round-ups when I can. I often can’t, because I don’t spend much time listening to musical curveballs, but this weekend I found a good candidate.

I checked out the following lyric video for “Aleine” (“alone”) because it includes guest vocals by Kristian “Gaahl” Espedal, in addition to the singing of Bergen-based Chris Wicked (Malice in Wonderland), whose band this is; the other participants on this track are guitarist Rune Nordahl-Pedersen, bassist V’gandr (Taake, Helheim), and drummer/backing-vocalist Eskil Sæter, as well as Leif Herland on synths.

It will help if, like me, you have a taste for darkwave/synthwave and post-punk. If you do, I bet you’ll be hooked by this very catchy song. If you don’t, well have a nice day anyway.

“Aleine” is the title track to a new album by Chris Wicked that will be released at some point early this year by Apollon Records. It also includes guest appearances by Hoest (Taake, Gorgoroth) and Niklas Kvarforth (Shining).