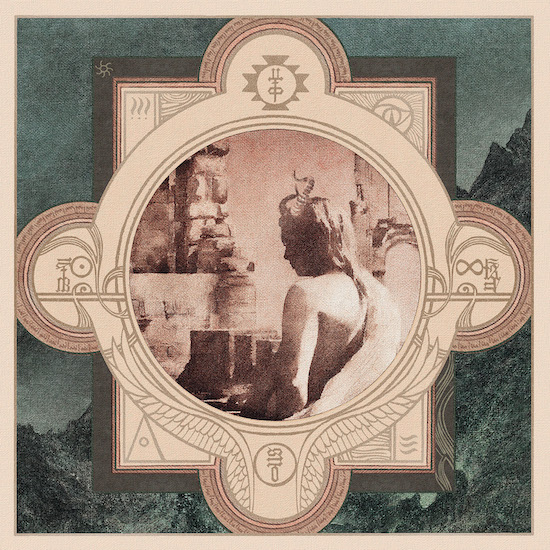 My opening choice is a video that presents a stunning marriage of sights and sounds. The music alone is an intense, almost overwhelming spectacle, one that’s nightmarish and hallucinatory, a seeming manifestation of possession. At first it’s as if Frynask have led us into a chilling realm of anguished wraiths, and from there we become immersed in ravaging turmoil. 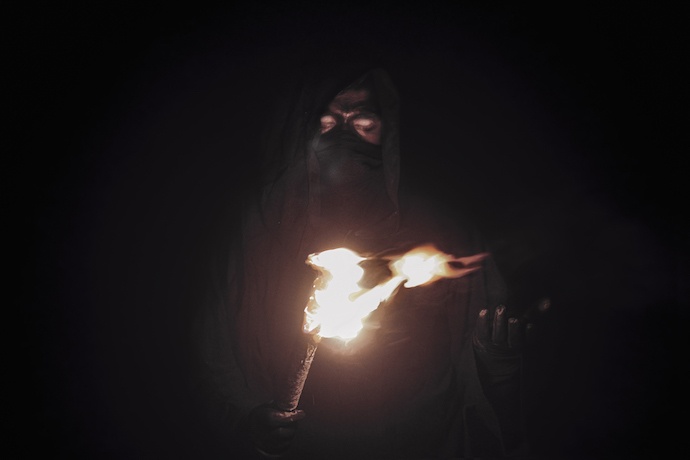 The lung-rupturing intensity of the wide-ranging vocals is astonishing. Listening to them, the streams of blood that flow through bared teeth in the video seem authentic. The menace, frenzy, and misery that flow through the riffing is equally intense. The music also summons panoramic visions of ominous grandeur, and thanks to an electrifying drum performance and flurries of jolting chords, the song has visceral physical appeal as well. It’s a thoroughly arresting experience, right up to the point near the end when a haunting acoustic melody softens the emotional blows.

As mentioned, the video is a great accompaniment to the music, combining desolate mountain vistas and a mysterious and frightening narrative.

The song is “Niðamyrkr”, off Fyrnask’s new album VII – Kenoma, which will be released by Ván Records on April 30th. Ván reports: “The album conceptually traces the depths of Musibatname, the Book of Suffering, written by the thirteenth-century Persian poet and mystic Fariduddin Attar“. It appears that pre-orders will begin on April 16th.

(Thanks to Rennie (starkweather) for pointing me to this extraordinary combination of sights and sounds — before I realized the promo had been sitting in our clogged inbox for ten days.) 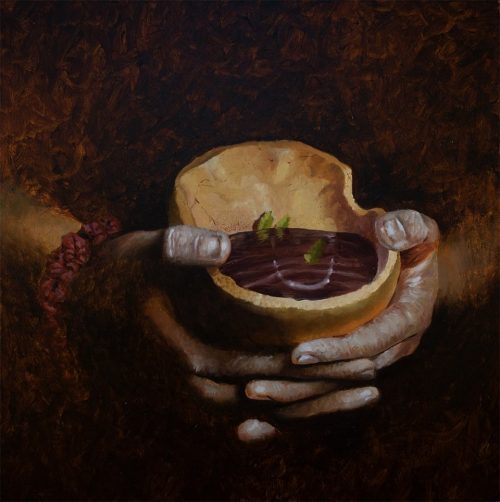 The first demo by this international collective, 2018’s Shavasana, made a powerful opening statement, as I attempted to explain here. Nava Khanda, their 2019 split with Samhara (reviewed here) only reinforced the strong impression.

Now we have a new single named “Consecrating Rite of Pavamāna“. Like Fyrnask‘s song, this one generates a frightening, otherworldly aura. The deep, roaring and high howling vocals seem to channel both intense fervor and fracturing wretchedness, and while the booming drumwork and the magma-like bass create a heavy, compulsive current, the riffing boils in a semblance of anguish and borderline derangement. The eerie, quivering lead-guitar harmonies that dominate the latter part of the song have psychoactive properties, almost mesmerizing in their effect, yet too unsettling to be completely spellbinding.

Kāla explain that the song “divines Bhakti as manifest through the holy psychotropic drink, soma”, which helps explain the cover art, a painting by Jotham Malave. (Thanks again to Rennie for letting me know about this new song.) 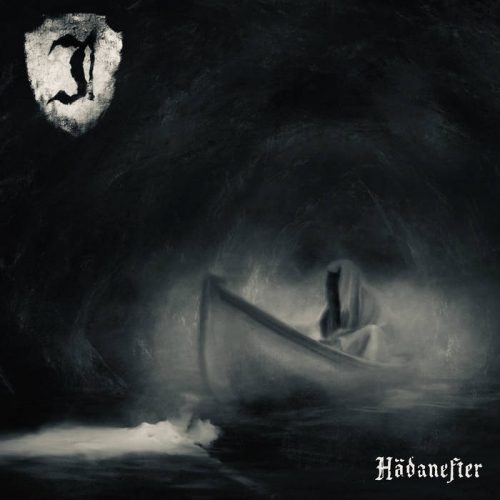 Hädanefter is the name of the debut album by this Swedish band. Their name, according to the Nordvis label, is an old Swedish word for being buried, loosely translated to ”attached to soil”. “The lyrical themes focus on the meagerness of mankind when faced with the forces of nature and how humans tend to become the very evil that they are trying to fight.”

Nordvis will release the album on May 7th. A complete song hasn’t been shared, only a three-minute excerpt, and the reason is probably because although the album is 33 minutes long, it includes only two tracks — which means they are long ones. But the excerpt is a gripping one.

After a bit of shimmering ambience, the drums erupt in maniacal fusillades, the buss bubbles in a fever, the vocals scream in a fury, and the tremolo’s riffing washes over the listener in dolorous cascades — until the drums spur into a gallop and the guitars kick into a pulse-pounding sequence of barbaric heavy metal fieriness. When the drums settle into a lurching march, the riffing changes again, straddling a line between gloom and defiance. And all this happens in just three minutes. It’s a damned tempting teaser for taking the full ride.

(My thanks to Miloš for making me aware of this news. Much more info about the project and the album is available through the duo’s interview with Bardo Methodology.) 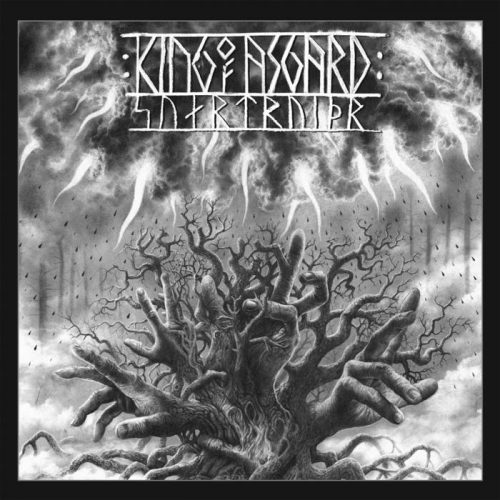 I’ve had such great previous experiences with King of Asgard that I’ve welcomed the news of their new album Svartrviðr, which is set for a May 28 release by the Trollmusic label. I haven’t yet made my way through the full album, only the two singles that have surfaced so far, but those two are thrillers.

The most recent one, “kvikr“, arrived last week along with a video that features the mysterious runestone in the village of Rök. The song’s opening sequence is a beguiling acoustic guitar melody with a medieval air — and the band continue that thread when the drums burst through (spitting bullets) as they send the melody high overhead in vivid trilling tones. The pacing changes repeatedly, and the emotional timbre of the melody changes as well, becoming desolate when the cadence staggers, but remains gripping. The ferocity of the snarled words is also spine-tingling.

The song includes an unexpected piano interlude whose sorrowful tones connect with the bleakness in the song. It makes the resurgence of that opening riff even more electrifying. The two words that come to mind first in thinking about the song are “epic” and “tragic”.

The older single, “frôðr“, which is also paired with a video, is the long track that opens the new album. It rings like a solemn anthem drawn straight out of mythical sagas (the word “tragic” leaps to mind again), but it also storms in ravaging displays of turmoil and desperation. When the guitars ring their chiming melody just as the word “Revelation” appears on the screen, it’s a glorious experience — and the extended solo which follows it is even more wondrous (yet also poignant). Okay, yes, the word “epic” springs to mind again. 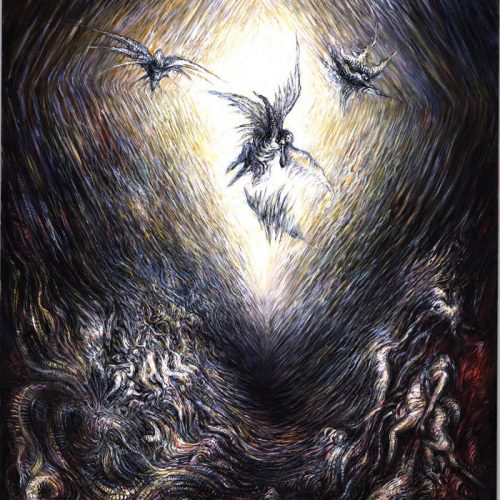 And now here’s the EP I mentioned at the outset. Released yesterday by Ván Records, its name is Dönsum í Logans Ljóma, and it’s the debut of the Icelandic black metal band Forsmán. If the general pattern of Icelandic black metal bands holds true in the case of this one, the members are also involved in other projects — and the music here is so ambitious and accomplished that it provides further reason to conclude these aren’t newcomers — but as is also often the case, they haven’t publicized their identities.

Forsmán‘s lyrics are voiced in ravishing, belly-deep roars and throat-splitting howls, their intensity matched by the blazing drumwork, the frantic bass-lines, and the roiling upheavals in the riffing. Often, there’s also a sweeping, panoramic quality to the songs which gives the drama in the music (and it’s theatrically dramatic) a larger-than-life quality. In the midst of such extravagant surges, it’s easy for listeners to be swept off their feet, spun around, and hurled upward into the midst of racing clouds.

The band do pick their moments to toss in jolting, head-moving riffs, skull-butting drum rhythms, and pulsating fanfares, and they introduce feelings of feverish despair, dolorous majesty, and soul-shuddering heartbreak as well. Yet it’s the sweeping, cinematic quality of the music — the experience of witnessing a grand and grievous pageant — that leaves the most lasting impression (and may leave your heart pounding in your throat by the end).

The EP was recorded by Stephen Lockhart at Studio Emissary. The cover art was created by Andrzej Masianis.

(Thanks again to Miloš for linking me to this great new EP.)