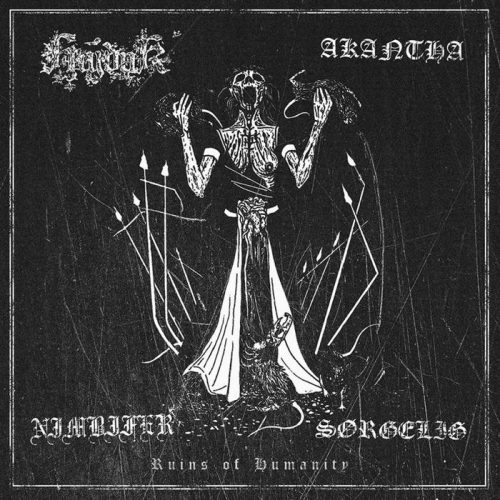 (We welcome guest writer Nick Awad, who shares his review of a 2020 black metal split release among Hajduk, Akantha, Nimbifer, and Sørgelig that deserves more attention.)

Though the style of Raw Black Metal is not particularly new, it is currently having a moment. These days, countless bands are emerging from the shadows with ominous promo photos, grainy audio production, and fast-selling physical releases. Depending on who you ask, this is either a golden age or the dumbest thing since the recent OSDM revival. As with most things, there is some validity to either stance. For every worthwhile Raw Black Metal project, there are about a hundred duds. Duds that may check plenty of the grim aesthetic boxes, but offer no real substance. That being said, those aforementioned worthwhile projects are absolute gold. Among those praiseworthy projects is a split released in the late summer of 2020.

Ruins of Humanity is a four-way split full of vicious songwriting and macabre ecstasy. The bands on the release; Hajduk (Bulgaria), Akantha (Greece), Nimbifer (Germany), and Sørgelig (Greece); prove themselves to be an arterial cut above the endless menagerie of aesthetic-obsessed internet vampires. Though the songs on this split do nod to the ideas that precede them, they are far from the soulless riff recitations of a “worship-style” project. They represent a culmination of traditions coupled with modern influence that does not stray from the necessary orthodoxy of the craft of Black Metal.

Bulgaria’s Hajduk starts off the split. With clear nods to Scandinavian staples and the early French scene, Hajduk demonstrates an expected lo-fi sound that doesn’t reach the point of utter inaccessibility. Following a haunting folkish intro, tinny, fuzzy guitars reign supreme over a torrent of far-away sounding drums as tortured vocals weave into the mix like rotting patchwork. The songwriting itself is mournful, but triumphant, like the morale of soldiers giving their all in a hopeless conflict.

The track features a soft interlude that goes on a little bit longer than necessary, but not to the point where the songwriting suffers. After the interlude, we are met again by the dirty full force of Hajduk. It’s beautiful, atmospheric, but rooted in bloodshed. This is no exercise in cheap, ham-fisted, catharsis. This is the horrifying beauty of death. 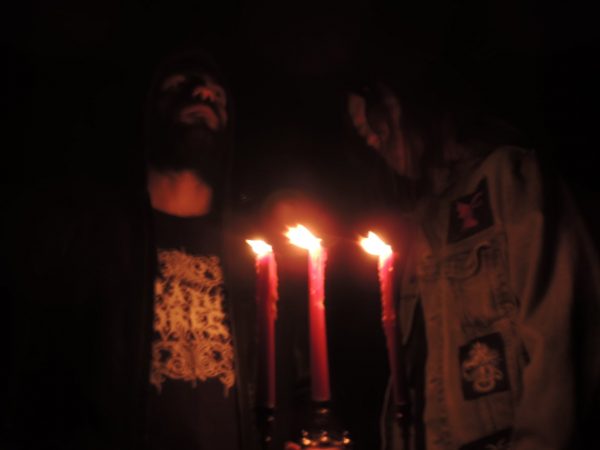 Based on the band’s country of origin and a title such as “Triarchy”, one may make the reasonable (albeit shallow) assumption that Akantha’s track might be mere Rotting Christ worship. What proceeds is far from that. “Triarchy” is, in fact, a modern interpretation of the unholy scriptures penned by America’s magnificent Judas Iscariot. The beginning of the track sounds like a B-side to “Dethroned, Conquered, and Forgotten” in the best possible way. An unrelenting hurricane of dark riffs, pummeling drums, and harrowing vocals. One can’t help but admire the dark nuanced melodies and hypnotic blast beats on display.

The song then breaks into a slower marching section that may call to mind the early outputs of Drudkh. This movement provides some breathing room, the eye of the storm wherein the listener can marvel in horror at the destruction left only moments before. The track then resumes its hypnotic assault before fading out, leaving the listener shell-shocked, but wanting more.

Up next are two tracks from Germany’s Nimbifer. The first of their offerings is “Am Boden”. Nimbifer continues the compilation’s sonic theme of dusty, lo-fi production. Their own interpretation of the style is a melodic assault resembling the guitar wizardry of the Finnish Black Metal scene. Fans of bands like Sargeist, Baptism, and Canada’s Spectral Wound have much to appreciate here. The German group exhibits a palpable talent for morose, but energetic riff writing. The composition of “Am Boden” hits that Black Metal sweet spot of catchy melodies and a ferocious performance.

Nimbifer’s second track is more of the same with tight guitar harmonies and icy melodies. “Faden…” is a little more on the somber side, but can still get you headbanging. The band favors more of a mid-paced assault with this song. Out of all the tracks, this one may actually be the weakest. By all accounts, it’s worth listening to, but pitted against its compatriots, it’s not all that memorable. 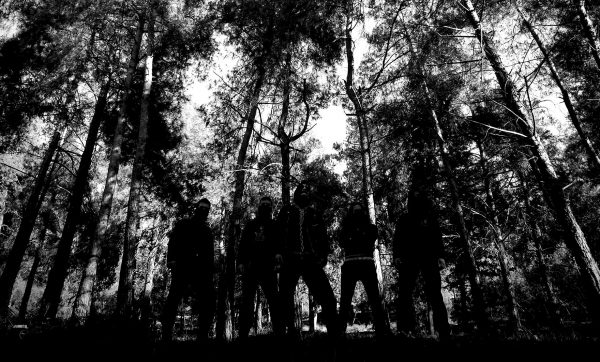 Sørgelig – The Pyres of Depression

Closing out the split is Greece’s, Sørgelig. From the get-go, “The Pyres of Depression ” has the cleanest production out of all the tracks. I mean, you can actually hear the bass, for God’s sake. The track begins with some nuanced and minimalist rift craft before descending into total depravity. And by depravity, I’m talking about the vocals. Holy shit, those fucking vocals. Where most black metal vocalists favor a decisively inhuman aesthetic, Sørgelig’s vocals are disturbingly human. It reaches a point where one can’t help but feel an unnerving empathy with these unholy shrieks. It’s as if a newly dead spirit were screaming past that eternal threshold. Crying, pleading, and wailing as the world goes about its business, ignorant of the horrors beyond.

As the song plays out, one may make connections to early-career Burzum. It may be more apt, however, to draw parallels with Eastern European bands such as Ygg or Walknut. Listeners will be thrilled to hear how the track continues to up its intensity with dynamic rhythms and euphoric harmonies. This is, by far, the best track on the release. The clear productions give the opportunity for all the members of the band to let their skills show. This band is tight. Pure and simple. There is no filler in their playing. There’s also no filler, whatsoever, in the songwriting. It’s frantic. It’s mournful. It’s terrifying. It’s magnificent. It’s true Black Metal.

This is, by far, one of the best Black Metal releases of 2020. Whether you’re a diehard or a casual fan, the Ruins of Humanity split is a shining example of the state of Black Metal today. It’s raw, well-written, and packs a punch. The bands offer a variety of Black Metal voicings that keep the listener coming back. Check out each band’s respective pages for download info. Visit Not Kvlt Records’ website to see if there’s any physical copies left.