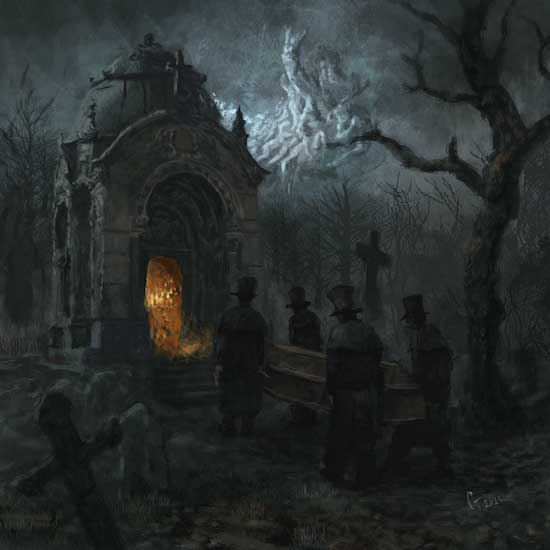 (Here we have Comrade Aleks‘ interview of one of the two men behind the Hungarian death metal band Rothadás, who have a highly anticipated debut album coming out next month.)

This man indeed has around six active bands and Rothadás (“rot” in Hungarian) is a relatively fresh addition to this list. Tibor (bass, guitars) alongside Lambert Lédeczy (drums, vocals) started Rothadás two years ago, and while none would expect it, the UK-based label Me Saco un Ojo Records has announced the band’s debut release Kopár hant​.​.​. az alvilág felé will be released on the 12th of October.

The choice of cover artwork (above) was damn effective, so why not check out this killer death-doom piece and its intoxicating and striking aroma of coffins, crypts, and death?

Hi Tibor! How are you? How does the promotion of Kopár hant​.​.​. az alvilág felé go?

Thanks, it’s all good! We are at the very early stage of the promotion at the moment, but I think it’s going well so far. The reviews and feedbacks we received are all great and inspiring. Can’t wait to see the reactions when the album is finally out in October.

You and Lambert have a rich experience of playing different kinds of more extreme and brutal stuff. What made you put some attention on this macabre form of doom-death?

I’ve been interested in putting together a death/doom band for a couple of years before we even formed the band back in January 2019, but I never liked the riffs and songs I had put together until then. I wanted to create something as morbid and gloomy as the classic Finnish bands did in the early ’90s. When I finally put together a song which I liked, I knew Lambert would be up for this sort of music since he is also a fan of the Finnish scene.

How do you see your primal motivation behind playing music like this?

I’d say the primal motivation for me is to create an otherworldly sounding death metal with the atmospheric doom sections influenced by the Finnish scene.

Kopár hant​.​.​. az alvilág felé has killer artwork, how did you choose this one? It’s not just atmospheric and expressive, it has that good old school vibe, an absolutely sweet piece.

Thanks, I think it’s a really beautiful painting too! That’s why we didn’t even put our logo and album title on the front cover. A couple of our friends are in a band called Lepra in our hometown and they had an astonishing artwork for their sophomore record, and of course I immediately knew that we would need the same artist for our cover so I asked for his contact. Luckily he was available and he also really liked our music and the theme of the artwork. The theme is Lambert’s idea with a few variations by the artist, who is by the way Khaos Diktator if anyone is interested.

You use your mother tongue for your lyrics. Does it allow you to use more poetic images for your songs or is it just an easier way to write down texts faster?

Using Hungarian lyrics was my idea before we even formed the band. I knew it would just work fine with this music, and besides, I always liked the Hungarian lyrics by Lambert in Ahriman. I think it’s way easier to write lyrics in English and I find most of the Hungarian lyrics in extreme music a bit cheesy, but as I said, Lambert is a great lyricist, and that’s why I knew if I ever want to create Rothadás it could be only done with him. His lyrics fit and translate the aura of the songs very well. I’m thinking about having an English translation in the booklet next time for everyone else who’s interested in the lyrics, because Google translate is just not going to do any justice.

The band’s name translates as “Rot” and your debut album shall see the light of day in this second pandemic year. Does this situation with lockdown, constant pressure from governments, and a threat of getting the virus reflect on your work over this material?

That’s right, the name is the general Hungarian translation of rot, decomposition, decay and putrefaction. The pandemic doesn’t really affect our work. We wrote and recorded both of our materials in separate countries. We’ve only just seen each other in person a couple of weeks ago when we both visited Hungary at the same time after more than 3 years. I normally write all the music with programmed drums. If we both like the song Lambert adds extra ideas or different drum beats to the guitar tracks, and then sometimes I also change the guitar riffs or melodies a bit if the new drum parts ask for it. As I mentioned before, the lyrics are solely written by Lambert and he also comes up with where to put what sort of vocals.

How long did you work on Kopár hant​.​.​. az alvilág felé?

It took me a year to write all the songs for the album. When I finished with a song I sent it to Lambert to add the extra ideas and drum beats. When we finished putting together every song, our good friend Árpád recorded the drums and vocals in Hungary, and then I recorded the guitars and bass here in England. Once the recording of the album was done, Árpád mixed and mastered it. I’d say from the start of writing the first riff to the final master it took roughly one and half years. You could say the process was as slow as our music.

What was your primary goal when you started recording these five tracks? How do you see Rothadás’ general idea?

The main goal was to add a more atmospheric ghastly sound to the album while keeping the primitive brutality of the demo. The Hungarian lyrics and band name gives a bit more unique vibe to it.

I see that Me Saco un Ojo Records plans to release the album only on vinyl. Do you aim to see it on CDs as well? Or do you see that digital platforms are a more rational decision today?

Actually Pulverised Records are going to release it on CD and we’ve also just agreed with Desiccated Records from Denmark to release it on cassette and they’re also going to print some t-shirts and longsleeves. As a collector myself it’s really important to me that my music gets released physically but I can’t deny the fact that digital platforms are a must nowadays. I also tend to listen to more Spotify and Bandcamp recently because of the lack of free time I have. I mostly listen to music while I’m doing chores, cooking and driving. If I have some free time I usually play on my guitar.

So, as you take part in a few more bands and projects… do you plan to keep Rothadás’ agony constantly alive? Or will you just put it on hold ’til the time when you have an inspiration for another death mass?

I’m definitely not going to force it if there is no inspiration, which is luckily not the case here. But at the moment we are working on the debut Coffinborn album and once that’s done we’ll start working on the second Tyrant Goatgaldrakona record. In the meantime I’ve already started writing some new songs for Rothadás, but don’t expect any new material within the next 2 years at least.