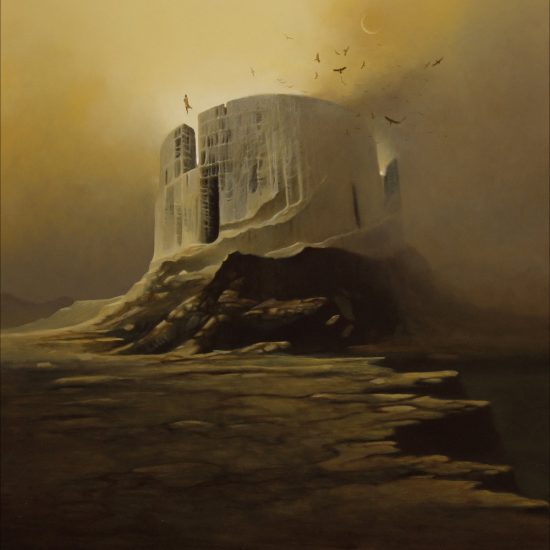 As promised, here’s Part 2 of a round-up of new music and videos I began yesterday (here, in case you missed it). I’ll dispense with further introduction and just get right to it….

There have been a few Dakhma’s out in the world, but this one is the Swiss blackened death metal band, whose works I once characterized as “foul, filth-ridden, fiery, and ferocious music that channels the feeling of ancient, implacable evil… and utter devotion to its ends. As they say in the trade, not for the faint of heart”.

I chose those words in the context of their 2018 debut album, and now they have a second full-length on the way. Not being faint of heart (at least not when it comes to music), I eagerly partook of the new record’s first advance track — which is the way today’s round-up begins. 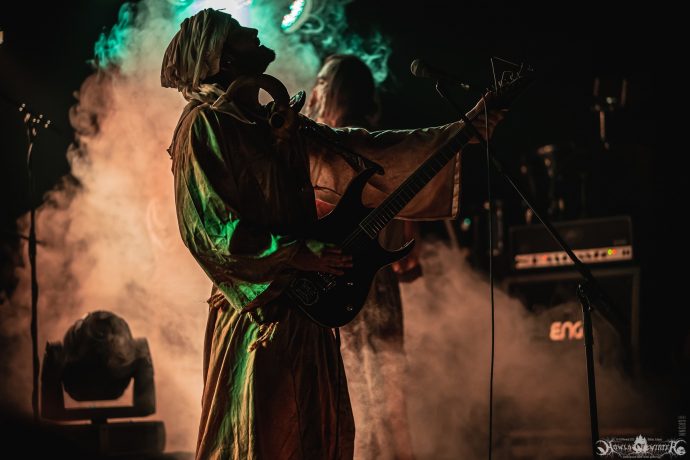 The drumming in “Birth of Flesh (Nama Karana)” pounds with tremendous force as the riffing generates a wall of seething hatred and pulsates like a bestial heart. The speed accelerates and slows, as the riffing buzzes and blares, delivering sensations of menace, madness, and misery. The vocals screech, roar, and wail like ghosts, accompanied by unearthly instrumentation. It’s a thoroughly frightening song that may leave you bruised and unnerved.

Here’s some further info from the album’s Bandcamp page

“On Blessings of Amurdad (Amurdad translating to immortality in Middle Persian), Dakhma abducts listeners to a distant, foreign land and dares to journey to a time long ago, when desert mystics and noble empires still strode proudly through ancient Persia. Thematically, Blessings of Amurdad explores the complex relationship between mortality and immortality in Zoroastrianism, based mainly on key passages of the ancient text of the Gathas. In particular, the band manages to provide a compelling narrative detailing perceived jealousies expressed by mortals towards the divine and vice versa. These themes are captured in the compelling cover artwork, painted by the inimitable Babar Moghal, depicting an ancient tower of silence, seemingly forgotten and decaying but nevertheless exuding a sense of foreboding and nobility, hinting at the divine”.

The album will be released by Eisenwald on November 19th.

I think I’ve made it quite clear that I will reflexively check out anything released by 20 Buck Spin, and so I did it again in the case of this next song. I did it even faster than usual after reading that the people behind Dream Unending are Derrick Vella (Tomb Mold) and Justin DeTore (Innumerable Forms), but they’re obviously onto something different here than either of their main bands.

The bass-and-drum performance that opens the song is a real attention-grabber, and the power of the rhythm section remains crushing throughout. What happens around it is ravaging doom, a layering of wailing and moaning guitars, coupled with truly harrowing harsh vocals that seem to radiate from some hideous crypt. There’s terrifying grandeur in the music, but also a thoroughly captivating guitar and keyboard instrumental accented by a saxophone (or something which sounds like one), Below you’ll see a reference to Pink Floyd, and that’s who I thought of in listening to that interlude — which is followed by a musical cataclysm.

The song is “In Cipher I Weep“. The album is Tide Turns Eternal, with a release date of November 19. And if you’re not already hooked, check out this verbiage from the promotional material for the album:

“Imbued with the dark atmosphere and wilting romanticism of the legendary ‘Peaceville 3’, (Anathema in particular), Dream Unending merely uses that moment in time as a starting point to compose songs that drift between emotional states both forlorn and uplifting. Ascendent Floydian guitar textures and sparkling The Cure-esque strumming lift Tides Turns Eternal out of the purely metal realm, where moody rock introspection allows for Elysian respite before DeTore’s world crushing roar assures no escape from earthly tumult is certain.”

As it happens, I listened to this next song back-to-back with what I just gave you from Dream Unending. The pairing worked very well. It’s not so much because the two songs are twins of each other, because this Norna song is even more devastating, but I think the flow from one to the other was a natural escalation.

Norna’s song is stupefyingly heavy. It hits so hard that you might think you’re sitting beneath a pile-driver in operation, and the blaring lead riff immediately invades the mind and begins to scourge it, accompanied by crazed shrieking and snarling vocals. The juggernaut rhythm is a serious neck-wrecker, and the siren-like pulse of that brazen main riff turns out to be contagious. The song relentlessly cycles ever onward, with an eerie screaming guitar fighting to get through. Eventually, the music subtly and briefly changes, but becomes no less devastating or head-hooking.

The song is “The Truther“. It’s the first single from a forthcoming debut album. You may be interested to know (I sure as fuck was) that Norna includes members from Breach, Ølten, and The Old Wind. The album will be released someday by Vinter Records.

The Distant Voices label doesn’t seem to care about profit, and maybe not even covering costs. How could it, when all its releases come in such tiny quantities, mostly limited to cassette tape formats? But the tapes, the accompanying materials, and  packaging are lovingly handmade, and I can attest to this because I have some of them, even though I don’t own a working tape player. I just want to hold and inspect them, and to support the vision of the label.

I suppose I should add that in my experience the music is always very interesting, and the label’s release of a new two-track work by Jzovce (one of the several projects of the label owner Thomas Bel) is no exception. I haven’t heard anything by Jzovce before now, and it seems from what I read in a press release that Lécanomancie is different from what preceded it.

“Carnation” has a dense, distorted, and dolorous sound, submerging the listener in waves of unnerving despair, as the drums primitively pound with immense impact. Eventually the pounding ceases, and the drumming becomes a stupendous racing avalanche of sound, paired with a mind-scouring typhoon of guitar anguish. Bel‘s vocals are truly shattering in the extremity of their throat-ruining torment. It’s all breathtaking and terrorizing… until the avalanche and the typhoon briefly subside, but even then there’s no emotional reprieve to be found. And strangely, it’s also entrancing.

“Maison spectre” is very much of a piece with “Carnation“, a true continuation. It gets straight to the world-ending calamity without prelude, creating a shattering sensation akin to what “Carnation” did in its most explosive phase, but then changes, reprising the sensations with which “Carnation” began. The music also includes the sounds of something like a mutated trumpet fanfare, and other audio accents that collectively contribute to the music’s  intensely dire and dismal feelings.

P.S. I’ve ordered this tape too. Maybe if I sleep with it under my pillow it will give me nghtmares even without a player.

Steady visitors to NCS will know that I’m a fan of Antuco, even though the entirely instrumental music is often far less heavy and abrasive than what you usually find here. But this new video for a song by Antuco named “Itxofil Mogen” will likely please those who need a layering of gritty distortion in their riffing. Even the chime-like ringing of the guitar leads is a bit abraded. And the song eventually gets very heavy and dense, and more steeped in anguish, though it’s still an enthralling experience. The whirring guitar melody has that effect, as do both the ethereal, ghostly radiations that propagate through the softer moments, and the steady, head-hooking beats and pulsating bass lines that surface.

Antuco’s videos, which create imagery sourced from Chilean film and photography, are always welcome as well, and this one beautifully suits the music.

“Itxofil Mogen” is one of three tracks on an Antuco EP named Kimün (Part 2) that was released in April, and that I stupidly failed to follow up on even after writing about another track from it last spring.