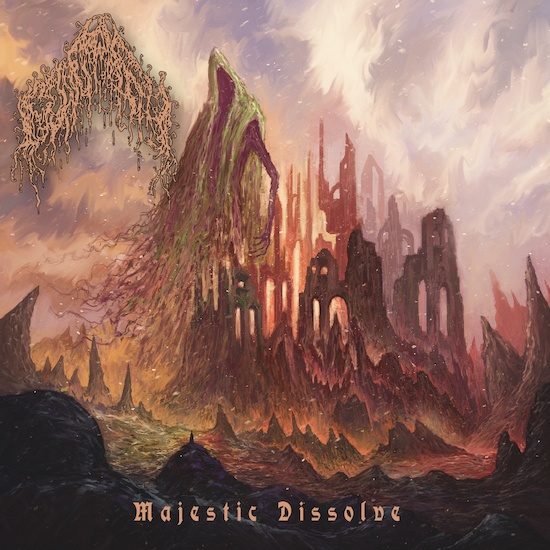 At last, the diabolical death metal band Conjureth from San Diego, California will be releasing their debut album on October 25th, via a label conspiracy with Memento Mori and Rotted Life.

In fashioning this beastly offering, emblazoned with the name Majestic Dissolve, Conjureth (whose line-up includes current or former members of such stand-out groups as Encoffination, VoidCeremony, and Ghoulgotha) creatively rooted themselves in the filth and fury of DM classics from the late ’80s, ranging from Florida to Finland, and the results on display in Majestic Dissolve are electrifying…

…and “electrifying” is definitely the word for the well-named song we’re premiering today: “An Occult Mosaic“. 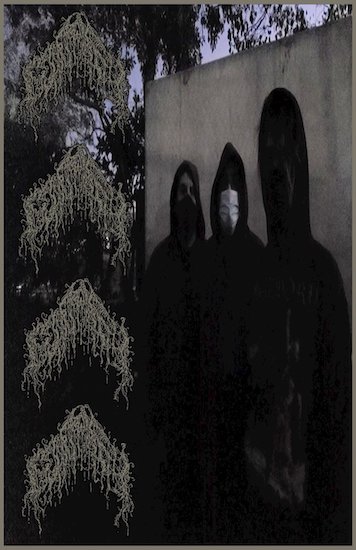 This new song has a vibrantly bounding drum rhythm, with occasional off-kilter twists and turns, bursting double-bass rumbles, and sudden stops and starts. But it’s what happens around those convulsive and discombobulating beats that makes the song so mind-blowing. Accompanied by a surging bass pulse, the guitars skitter and swirl in a mad, high-speed frenzy — darting, soaring, and diving in as authentic a musical manifestation of derangement as you could wish for.

The riffing becomes cruelly vicious as well, and the feral growls and howls sound like enraged beasts coming for your jugular, but again, it’s the berserk riffing exultation that makes the song stand out. You’ll also discover that there’s actually a structure to the lunacy, and that those crazed fretwork refrains become fiendishly contagious.

Credit for the album’s eye-catching cover art goes to Mark Erskine. Memento Mori will release the CD version while Rotted Life will handle the vinyl and cassette versions. For more info, check the links below — and also be sure to listen to the streams we’ve installed of the two previously released singles from Majestic Dissolve, “Wet Flesh Vortex” and “The Silent Hangings”.

2 Responses to “AN NCS PREMIERE: CONJURETH — “AN OCCULT MOSAIC””