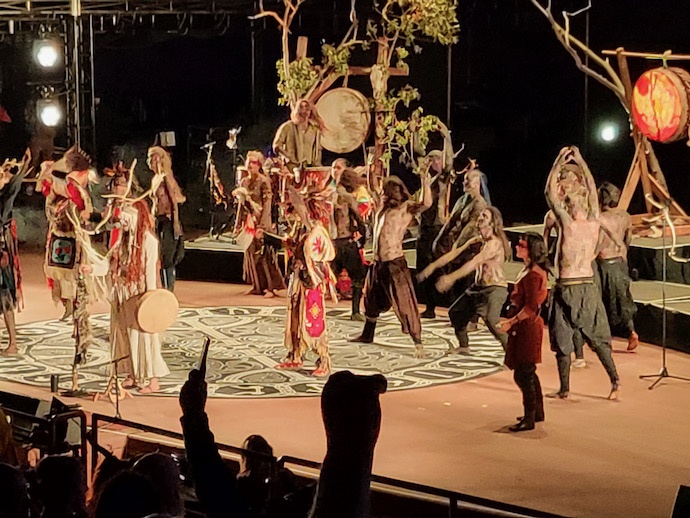 (Our Denver-based friend Gonzo had the good fortune to witness a recent performance by the multinational European collective Heilung at the extraordinary Red Rocks amphitheater in Colorado, and he sent us the following impassioned review plus photos that he took.)

There aren’t many words in the English language that describe what it’s like to watch Heilung perform their ritual in a live setting.

But just as their self-proclaimed moniker of “amplified history” seems to imply, you’d almost have to come up with new expressions to adequately describe their show to someone who’s never seen it, let alone heard of the band at all.

How else could you describe the thunderous booms of massive drums made from deer skin and painted with human blood? The hypnotic throat singing of Kai Uwe-Faust? The piercing siren songs of Maria Franz? And the modern-day portrayal of an ancient Iron Age ritual that features about 15 other performers, dancers, singers, actors, and enough ambience and atmosphere to be one of the most memorable live shows you’ve ever seen?

I have no idea, but it’s more than worth a try. 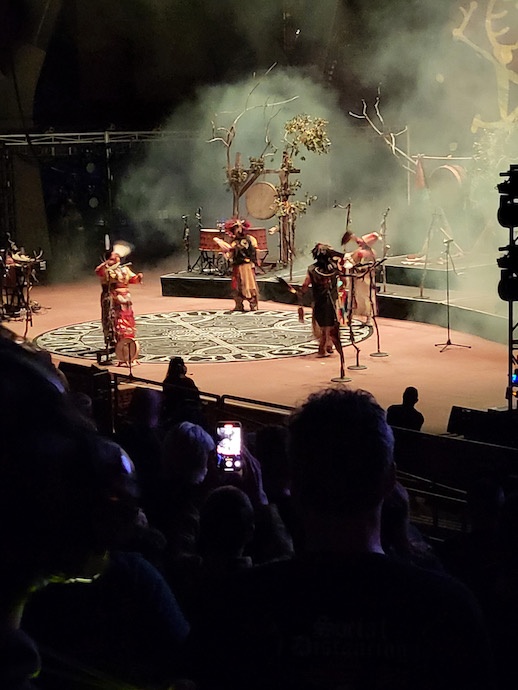 First, the setting. Walking into Red Rocks is like discovering an archaeological dig-site straight out of an Indiana Jones movie. The rock formations that line the exterior of the amphitheater are a geologist’s wet dream. The views from the top are spectacular. From the hills on the other side of the venue, local wildlife cautiously watches the crowds assemble. Given Heilung’s affinity for nature, it’s fair to wonder if they’ve wanted to play here since their formation in 2015. One visit here and you can see why.

Having had the good fortune of seeing Heilung twice before, I knew what to expect from their performance. I also was low-key in expecting to be captivated by the decadent stage setup, and I wasn’t disappointed. Ornate trees and greenery wrapped themselves around the various drums and percussion throughout the stage, with careful detail going into every aspect of the visuals by which we were about to be transfixed. There’s a reason the band doesn’t tour with any supporting acts – the amount of time it would take to change sets would defeat the purpose alone.

When the moment finally came for the opening ceremony, groups of local indigenous tribes came out first. They sauntered out in bright, beautiful colors and appeared to be cleansing the stage of any negative energy for the show to come.

A silence fell onto the crowd that I can only describe as deafening.

The only solemn respite from this silence came when the crowd repeated each line of the opening rite:

Remember, that we all are brothers
All people, beasts, trees and stone and wind
We all descend from the one great being
That was always there
Before people lived and named it
Before the first seed sprouted 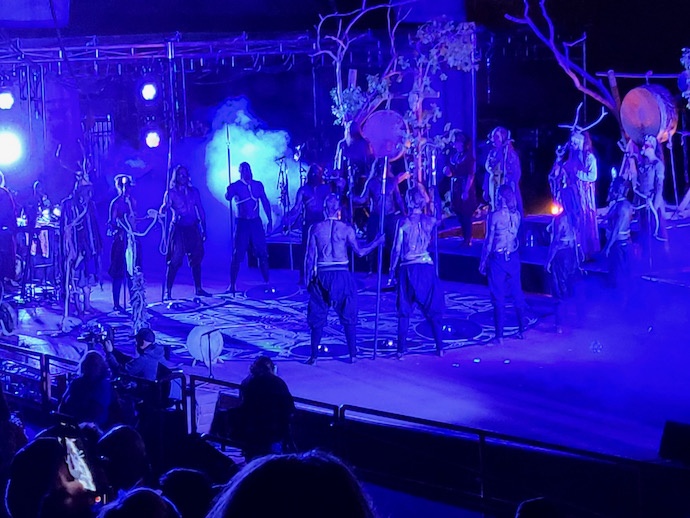 When the opening ceremony was over, the indigenous tribes retreated backstage, leaving only the core members of Heilung before us. They stood motionless for what seemed like an eternity while the crowd roared with anticipation and excitement. Then, out of nowhere – the piercing cry of an ancient language, signifying the start of the music.

The huge drum at center stage was pummeled to life. Vocalizations of all kinds erupted from Franz and others. The steady, pulsing rhythm of the immense percussion engulfing the stage seemed to almost infect all 9,225 onlookers into a trance. Nobody would be emerging from it anytime soon, including this enthralled scribe.

Opening song “In Maidjan” is always a highlight of the Heilung live experience for me, with its raw medieval energy and haunting vocal harmonies that persist throughout. Tonight during the song, there was a sort of concentrated frenzied madness that emanated from the stage and into the people, the ground, the rocks, and into the far reaches of the hills beyond. It was simultaneously emotional, primal, confounding, and above all else, breathtaking. 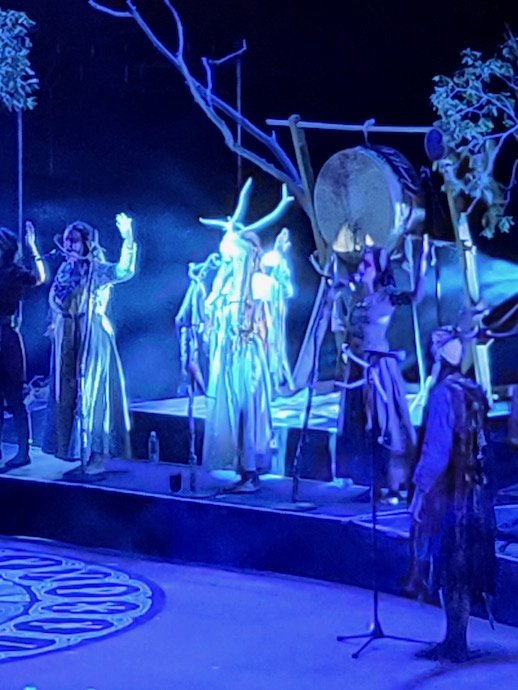 If my body and mind hadn’t yet been sent to a parallel dimension where time wasn’t real, the howls that began “Alfadhirhaiti” would’ve done the trick. Goosebumps went up my spine as if I’d just been injected with freezing water from the North Atlantic. If you’ve never had the opportunity to hear 9,000 people howl at the moon, I can’t recommend it enough.

The ritual continued, through the eerie unease of “Krigsgaldr”, the opulent beauty of “Norupo”, and the poetic majesty of “Traust.” The ensemble cast of warriors, who looked like they had just crawled out of a portal from a thousand years ago, caked in war paint, pounded the floor using their spears in rhythmic unity with the drums. What’s truly insane about Heilung is that 90% of their sonic bombast comes from percussion and the human throat, which is a mind-blowing thing to realize after it’s been dominating your senses for 60 consecutive minutes. 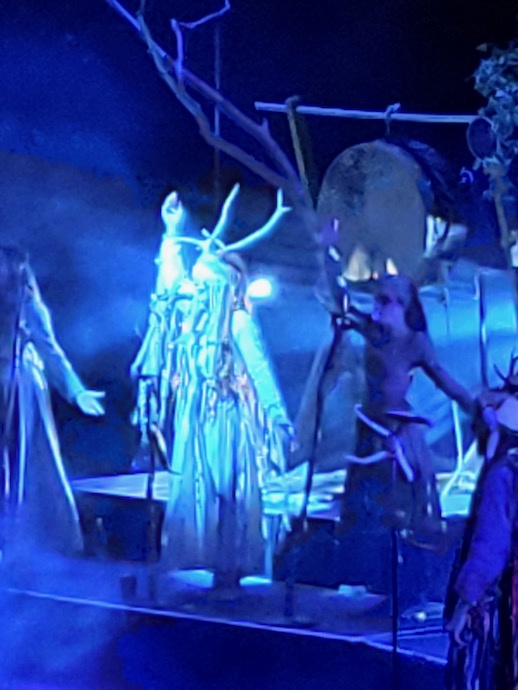 Just when the band was reaching the crux of their performance, though, something terrible happened.

Abruptly, the sound from the stage went silent. The stage lights went out. What had been almost sensory overload turned to a soundless void in the blink of an eye. It almost took me a second to process what was happening, but after a moment, it was clear that the venue was having some kind of technical problem at the worst possible moment.

The spoken-word poem of “Galgaldr” was inaudible. The technical difficulties persisted, came back, and then were abruptly cut off again. The crowd reacted with more noise than ever, enthusiastically clapping along with the drums as if to will the soundstage back to life.

It went on for what seemed like an eternity, but Heilung being the dedicated group that they are, they didn’t miss a beat. When the sound was restored, it was just in time for the closing spectacle of “Hamrer Hippyer” to begin. The entire ensemble returned to the stage – indigenous tribes from the opening ceremony, the full battery of spear-clenching warriors, and every singer, dancer, and performer that traveled with them from Copenhagen. 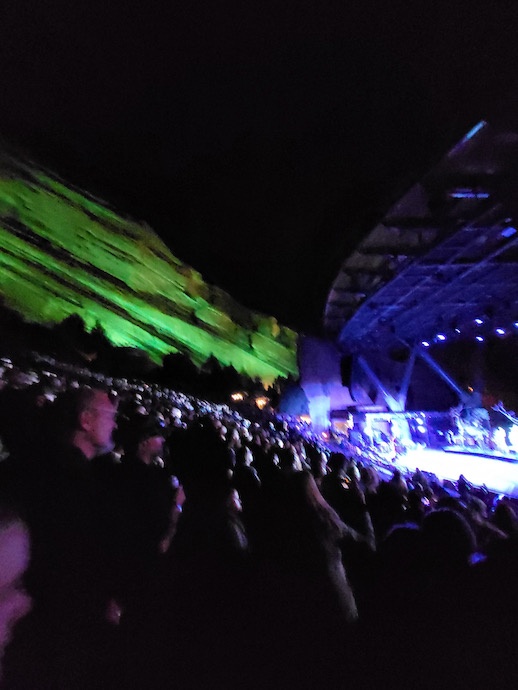 I looked up for a minute, focusing my gaze skyward. The moment of clarity granted me an amazing, unobstructed view of the stars. Even with the stage lights shining brightly again, it took my breath away, and if we’re being honest, brought me to tears. This was the perfect moment that I’d been waiting for since this show was postponed over 12 months ago. The confluence of human beings from all over the planet, singing and dancing and performing in a moment of pure, unfettered joy together, coupled with the breathtaking setting that this incredible state offers, is a gift that had been far too long in the making. In its own specific, inexplicable little way, it was a moment of pure perfection.

In German, “Heilung” translates to “healing.” And right there, there is no better way to capture what this band conveys than the very name itself. Their message of unity, inclusivity, and togetherness is one that resonates with an audience that stretches far beyond any border or boundary that we’ve invented for ourselves over the ages. If anyone needed any evidence of this, all they would need to do is talk to someone in the crowd that night. I spoke with people who had driven from as far as Florida, Texas, and California to see Heilung play in this unforgettably beautiful place.

This was more than just a show – it was an experience that resonated triumphantly as a moment of collective joy in celebration of the simple act of being alive. Heilung is living proof that art, in whatever form it may take, is capable of representing the best of humanity, and the creation and performance of it is one of the most powerful experiences people could ever share together.