“Hell is in man, hell is man.” That could be considered a summing up of the debut album Allégeance by the French black metal band Diablation, and further, these commandments: “Reject your God, Erase your vows, Embrace the ineffable, Accept the Devil”.

Drawing upon the worship of the Devil as their essence, Diablation have created music that is an enthralling descent into darkness, a rendition of fealty and frenzy, of torment and pain, of unearthly splendor and diabolical peril.

As a riveting sign of their achievements, today we present the third track from Allégeance that has been disclosed so far in the path toward the album’s December 6 release by the distinctive French label Antiq. Its name is “Des Ruines de la Solitude Éternelle“. 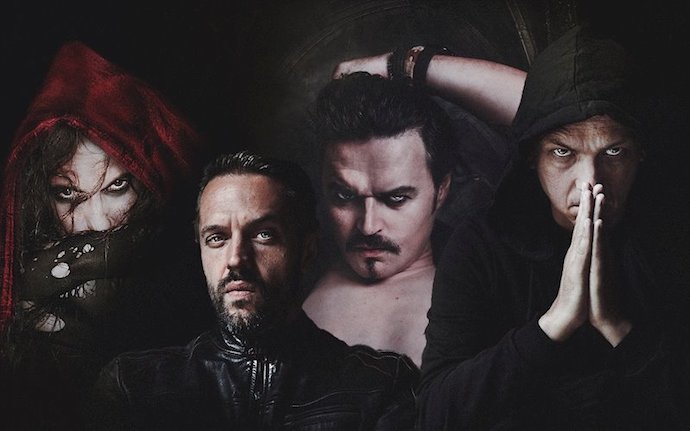 The song’s brief opening passage rings with ancient and mysterious tones, a brief seduction before a storm breaks in a sudden surge of hammering drums, scalding vocal intensity, and searing riffage that seems to embody spasms of pain.

Glittering keys and sweeping synths wash through the tremendous turbulence, providing hints of glory. A reprise of the opening provides the backdrop for grim spoken pronouncements, just before the music ravages and glistens again, creating moods of despair and devotion.

Beautifully elaborate and continually changing, the song is both unnerving and enticing. It continues to create spaces that are haunting and sinister, obscure and unfathomable, and following those with torrents of fearsome derangement, which the howling and screaming vocals propel to further heights of shattering intensity.

The player below includes streams of two other tracks. The first of those, “Aigle du Mal, Aigle de Sang“, is frightening yet entrancing. It reveals eerie, preternatural keyboards that seem to ring from fracturing heavens, and combines those with viscerally powerful rhythms, terrorizing vocal battalions, and racing storms of searing riffage and rampantly hurtling bass and drums. The effect is nightmarish yet intoxicating, menacingly magisterial and marauding.

The player below also includes a stream of “Ego Daemonium“. No less dynamic and multi-faceted than the preceding two songs, it includes a performance by Rose Hreidmarr (Glaciation, Baise ma Hache, Bâ’a, ex-Anorexia Nervosa) as well as the incorporation of other tonal ingredients and variations in mood, creating passages of otherworldly beauty, vast symphonic sweep, and primal power.

Allégeance was mixed by V. Orias A. and mastered by Stefan Traunmüller at SoundTemple Studio. It features striking cover artwork by Tancrede Szekely. Antiq will release it on deluxe digipack CD format, and digitally.