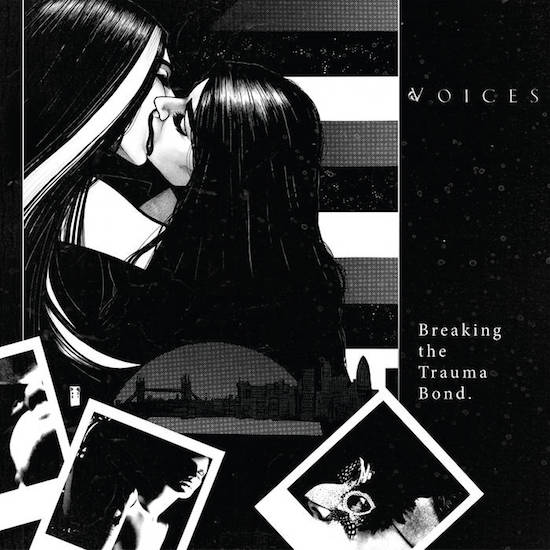 (This is DGR‘s review of the new album by Voices, which was released in late November by Church Road Records.)

I don’t think I was prepared for what transpired within the bounds of the hour-plus of the latest Voices album, Breaking The Trauma Bond. Now there will definitely be a few of you who smirk and go, ‘well, Voices being weird is modus operandi for them,’ and there is definite truth to that statement. Voices are a band  I show to people not because I fully enjoy everything they do but because when the band wrap their minds around a concept – especially since 2014’s London – they somehow manage to make some of the most fascinating and equally abrasive music out there.

The band have a core of death metal and black metal running through them but every release since 2013’s From The Human Forest We Create A Fugue Of Imaginary Rain has been so starkly different from the others that they’re a hard band to pin down, especially since they paint themselves as being sophisticated and avant-garde artistes. However, not even the early single release of An Audience Of Mannequins earlier in the year fully covers what happens within Breaking The Trauma Bond, because the two songs on that single may be the only two traditionally ‘heavy’ songs on this release. Even for Voices, Breaking The Trauma Bond is a fuckin’ weird disc. 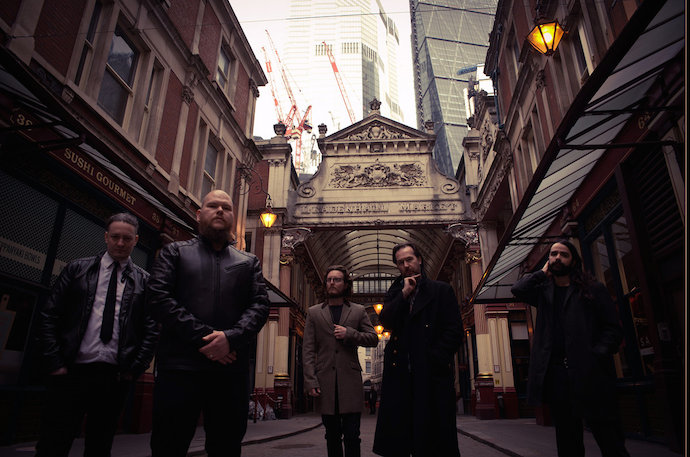 The album continues the lyrical-thematic concept that the band have been mining since the days of London, painting the world in a series of drab greys and black and white, and continuing the themes of isolation and depression. Don’t let the album title fool you either because Breaking The Trauma Bond goes on a journey and may in fact end up in a place just as bleak as where previous albums had left it at the start.

The title may sound somewhat hopeful, and believe it or not, the opening couple of songs have some head-turning moments that seem like they support that suggestion – I certainly don’t think I was prepared for the auditory whiplash that was the glory-chorus closing out the title song – but that is just one of many self-contained acts throughout the entirety of the album.

Breaking The Trauma Bond feels like Voices trying to see just how much bullshit they can get away with on this album. The idea of them being abrasive, avant-garde, or weird with their music only covers about half of it. This is a disc that is a band poking and prodding and finding out what stuff people will highlight or point out as being off-kilter. If you’re used to the idea of them being a crushingly heavy group, or a grinding industrialized machine, then this album will be an even stranger experience.

At times the album does feel like a natural progression from the band’s previous works, especially Frightened, but it still seems like Voices really wanted to turn heads throughout. There’s actually some accessible moments here – were it not for the group’s patented haunted and bizarre singing – with one song in particular that in the arms of a band who weren’t painting their characters as wallowing in suicidal depression would pass as a radio rock single.

Voices exists as an entirely different entity from its various members’ other projects, but damned if it didn’t seem like there were times when the Akercocke crew’s 2017 release Rennaissance In Extremis had started to bleed through a little into this one. Your mileage with Breaking The Trauma Bond may actually depend on how far you got with that one and its weird operatic prog-death bizarre ambitions.

I mean, the group even managed to sneak in an odd sort of industrial trip-hop-esque backing beat into one of the sixteen songs here. The album becomes a circus-funhouse musically as it continues on.

With the album existing as a musical drama of its own, it makes sense that the real world would seem to have acts to it; as the album continues on it gets darker. There’s plenty of traditionally heavy moments throughout where drummer David Gray gets to blast away like they’re strip mining the side of a mountain, and honestly, the drumming can be so chaotically messy throughout that it becomes a highlight of the disc. Yet, as things stretch on – and they are filling sixteen songs here – the band experiment and become stranger and bleaker. While it may have seemed that there was some sort of haunting progress made early on in the disc, things cycle back around by the time things close out and by the end of the release the last few things happening count a distorted voice among them intoning “Life is not worth living”.

Like mentioned before, Voices are one of those bands that will often get play around here simply because they leave you bewildered by the time you’re done. There are some brilliant moments throughout every one of their releases and fascinating ones as well, often within the same song where it can feel like a philosophical exploration of  ‘now why the hell would you want to do that?’ But by the same token it’s that sort of draw that can keep you coming back. Breaking The Trauma Bond, in its quest to be the strangest and grandest of the albums, does some serious work to try and draw you back in over and over.

As one of the releases that came out in a minor flash-flood of music at the end of November, it’s probably the one that has gotten the most exploration between its first release and the current writing about it. It’s a roller-coaster of an album for sure that always seems to toe the line just to the left of being strange and unnerving. If you’ve enjoyed the band’s previous explorations of the bleak void that is humanity then this is the most natural progression from that. For me, it’s an easy yes. Everyone else may find themselves in a situation where at the very least you can’t but help but be fascinated by it.

One Response to “VOICES: “BREAKING THE TRAUMA BOND””