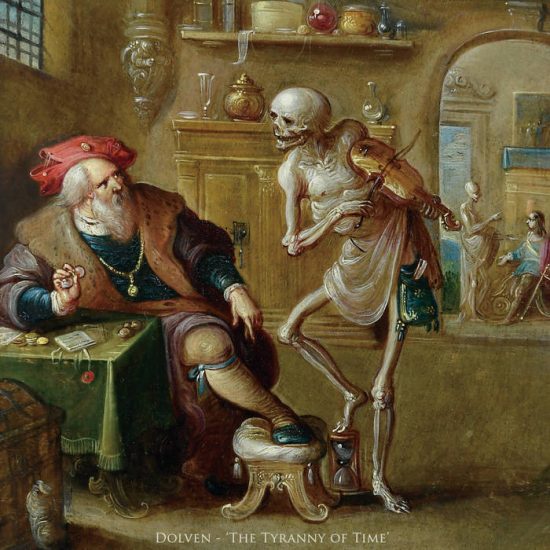 I (briefly) covered the first album by these melancholic minstrels all the way back in 2015. I’m an ardent devotee of folk music. And that passion seems to deepen as I grow older. Acoustic instrumentation brings with it an air of remembrance. Even the term “folk” carries connotations of history, mythology, culture, and traditions. Folk music isn’t something that’s performed for you. It isn’t something that you just listen to. Rather, folk music invites you to participate in the formation of a narrative. This is the realm where Dolven dwells.

Each medium (vinyl, CD, and cassette) of The Tyranny of Time bears a different cover. The paintings on both the vinyl and CD versions (by Frans Franken and Arnold Bocklin, respectively) depict Death playing a musical instrument (a violin or a fiddle). A cassette copy of The Tyranny of Time depicts the painting “A Christian Martyr Drowned in the Tiber During the Reign of Diocletian” by Paul Delaroche.

The Tyranny of Time invites us to participate in a narrative about mortality and brevity. Look at how Death makes merry while we make plans. Death revels and plays a tune while we scurry about hoarding fiat currency and precious stones. We work, and we strive, and we store. All the while, Death stands nearby gleefully running his bow over the strings of his violin. When the end comes, what will all our work mean? What is it for?

Dolven’s Bandcamp page describes their sound as “acoustic doom.” In this instance, the label is very apropos. All of the songs on The Tyranny of Time involve parting with something. Parting with loved ones. Parting with the seemingly inconsequential moments of one’s life. Perhaps even parting with one’s own soul.

The music on The Tyranny of Time is like reality – cold, bitter, and sparse. At the same time, it has a somber beauty to it. The track “43” finds a narrator grappling with the chaos and confusion of a deceased father figure. “After The Deluge” finds an Ego and a True Self ripping one another to shreds – not unlike the acerbic black metal vocals contained within the song.

Fans of Navigating The Labyrinth waited 6 years for new music from Dolven. The Tyranny of Time expands on everything Dolven’s debut did and does it better. Please support the band via physical copies below.

9 Responses to “DOLVEN: “THE TYRANNY OF TIME””