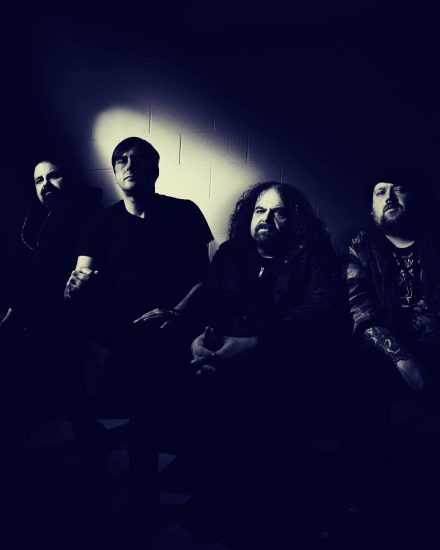 (DGR wrote the following review of a new EP by Napalm Death that was released on February 11th by Century Media Records.)

Once again, I find myself at the altar of reviewing a Napalm Death release since it’s one of the things that has commanded much of my listening time. They’re good at hijacking my attention like that.

Considering the scramble that seems to be happening for bands to release ‘something, anything‘ in the last few years as touring continues to take a hit from the ongoing pandemic, EPs have become an increasingly bizarre proposition. They’ve always been fairly nebulous throughout the years, often a collecting pool for stuff that didn’t make an album after recording sessions or previews of whatever bundle of ideas might be currently rattling around in an artist’s head while they try to figure out where to take their project next.

Right now, EPs have expanded that nebulous sensibility to being these increasingly huge catch-alls of anything and everything – which can make for some incredibly all-over-the-map listening sessions thematically. In the case of Napalm Death‘s newest release, Resentment Is Always Seismic – A Final Throw Of Throes, that weird thematic sensibility is just a continuation of what the band have been doing over the past couple of decades, because outside of their obvious ‘pillar of grindcore’ status the band have always been willing to indulge an ambitious and strangely artistic side – so much so that they have added whole eras of ‘weird death metal’ to the hybrid of current industrial dirge and hardcore punk repeatedly beating the shit out of each other that the band currently love to play with when they’re not dishing out their usual genre staples. 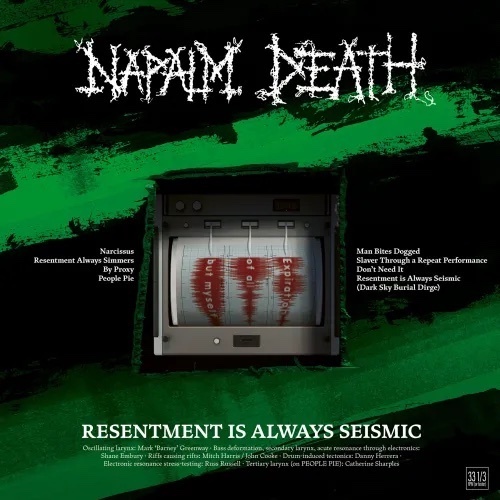 Resentment Is Always Seismic is meant to be a companion piece to the group’s 2020 release Throes Of Joy In The Jaws Of Defeatism, adding a half hour of new music to the band’s catalogue and serving to highlight the influences and ideas that have been rattling the band’s brain in the time since that release. What this results in is a handful of newer blast-heavy tracks that range from the group’s grindcore bread-and-butter to their more death metal leanings, two interesting cover songs, and a third one that somewhat straddles the line between artist collab, cover, and newer song. If that synopsis doesn’t highlight the fact that Resentment Is Always Seismic throws you around like being caught in a musical earthquake, the way the first few songs are so starkly different from each other surely will.

That sense comes for the positioning of their cover of “People Pie” – which is one of the longer songs on the EP – right after two of the more death and grind focused tracks and one slowed-down dirge in “Resentment Always Simmers” – a song that spends much of its time living up to its ‘simmering’ title, a slow-boiling groove that never fully explodes, lurching forward until it reaches the more blast-friendly halls of “By Proxy”, which follows it.

“Narcissus” – the opening number – is another of the more classically-aligned Napalm Death affairs, just a relentless assault from front-to-back, which is why the spillover into the slower crawl of “Resentment Always Simmers” is so jarring at first. It’s like a trip backwards at first, traveling from a song that could’ve fit perfectly on Throes Of Joy right into something that could’ve just as easily slotted in on the album Apex Predator – Easy Meat, prior to it. Of course, that constant back-and-forth continues throughout Resentment Is Aways Seismic as well, because it continues that rotation from fast-to-slow even with its two covers. The Slab! cover is played fairly straight with some glorious bass-tone driving the whole thing and guest vocals provided by Catherine Sharples, whereas the cover of Bad Brain‘s “Don’t Need It” is in ‘blink and you’ll miss it’ form at a minute and five before it shoots out of the door.

Resentment Is Always Seismic is an all hands on deck in the Napalm Death universe style of release – you can see it on the album art since they have the credits right on the front. As a result, it’s as noisy and as fractured as you might expect when you have people from the extended Shane Embury musical universe adding their own maddening contributions to the formula. The EP bounces around from one strange genre-hop to another, even folding in on itself with its title track as it becomes a Dark Sky Burial song (Shane Embury‘s solo electronic/experiment project) filtered through the Napalm Death lens.

It’s a strangely ambitious undertaking for a project most people know for having a live show that is like standing in front of a high-speed baseball pitching machine which only fires sledgehammers. WIth Resentment Is Always Seismic being as strange as it is, the sheer gall of a lot of it makes it a fun experience. Adding it to the overall Napalm Death pile makes the party-shuffle even more wild. As a companion to the punk-influenced riffing on Throes Of Joy In The Jaws Of Defeatism, it’s a little harder to place, but as a snapshot of all the battling influences and alchemical experiments running through the Napalm Death crew’s minds, its an interesting dive.

One Response to “SHORT BUT SWEET: NAPALM DEATH — “RESENTMENT IS ALWAYS SEISMIC – A FINAL THROW OF THROES””